across the world, the biggest UK food companies have today announced they will include “pretty much anything that’s lying

around” in their basic range meat products from the summer, a move that will inevitably include substances which are “really

quite toxic” to humans.
“Of course, we’d never do anything to deliberately harm all the fucking plebs who eat our nasty shit, that’s just bad business.” Industry spokesman Torny Supple advised Home Defence. “But a bit of strychnine or arsenic in small doses isn’t going to kill them, and we’ve got loads of it going spare. What else can we do with all this barely-edible crap, apart from feed it to poor people? At least we know what these substances are. Compared to equine contamination or faecal traces or whatever the hell goes in a Pepperami, I think our customers are getting off lightly.”
Mr Supple continued: “And if they don’t like it they can always get better jobs. Then their kids won’t have to subsist on meat
pies and can turn vegetarian. This is a democracy, after all.”
While recent studies have shown that, even without obviously poisonous additives, processed meats are a bigger factor in early
death than sugar, cigarettes, skydiving without a parachute, heroin or reality TV, the Food Standards Agency has been unable
to step in and prevent the mass poisoning by ‘big food’. This is because the FSA have downsized to such an extent, they
currently only employ one person called Derek, and he’s well behind on paperwork.
NEWS ROUND UP
with Al Likilla
Home Defence UK
A Symptom of a Greater Malaise
Government to Assess Corpses’ Fitness For Work
11/03/13
ALL NEWS ROUND UPS:

To Parliament, where Work and Pensions’ Secretary Iain Duncan Smith’s latest sally in the ongoing ‘War

Against Shirk’ has generated much amazement and no little controversy around Westminster circles.

“I know, I know, it sounds unpleasant.” IDS told parliament when forced to explain himself. “But what would

you rather have? Expensively manufactured mannequins, shop window dummies and scarecrows, or an

innovative and cheap way of getting the dead back into work?”
“Besides, my scheme will only take bodies that are in decent condition. We will not use cadavers that have been burnt to a crisp, or
torn apart by wolves, or squashed in a horrific car accident, to give you a few examples.” Mr Duncan Smith smiled. “Assuming the
structural damage to these human forms is low, the deceased will be embalmed, botoxed, stuffed and utilised in such a way that
more success stories can be added to my unemployment narrative. Which is marvellous.”

When questioned as to whose loved ones would begin their ‘post-life’ careers as models, ‘floorstanders’ or security guards

“Opt out will be by exception only.” He confirmed. “If irresponsible individuals opt to let their deceased relatives be wastefully

cremated, or worse, buried in one of the country’s few remaining green spaces, they may find their benefits stopped.”

“But don’t worry,” The head of the DWP reassured those present. “This scheme won’t apply to those in our favoured ‘deserving

just by being well off. These good people shouldn’t have to worry about the sanctity of loved ones being violated by insects,

pranksters or perverts. And I can assure you, we’re going to keep a very close watch for necrophiles through every step of this

process. We’ve learnt the lessons of Savile, oh yes!”
Much-respected outsourcing experts Atos healthcare have won the contract to enforce tests on people who have recently left this mortal coil, and they will assess each corpse for level of decay, suppleness and progression of rigor mortis, amongst other things. The next phase in this initiative then involves confirming whether each person will upset kiddies or the weak-minded when conducting their new role, because they died of obesity or goitre, for example.
It is anticipated that up to 95% of the ‘post-alive poor’ will be forcibly removed from their grieving families and reassigned a role in
the employment system which, as Prime Minister ‘Diddy’ David Cameron noted in an off-the-record moment, means “they’ll be
more use to us than they ever were alive”. Human rights activists and wussies across the UK have objected to these proposals
on grounds of ‘respect’ and ‘ickyness’, while organ-donor charities are expressing concern at a potential lack of bone marrow or
spare intestine to go round. On top of this, union ‘barons’ have condemned the plans, claiming that returning the dead to the
workplace is “ridiculous”, what with their pallor and lack of mobility unconducive to effectiveness. Plus they take work away from
the semi-alive, currently doing boring and repetitious jobs. But those who are expected to give up their dead have actually
vocalised a surprising amount of support for the plans.
“It was a tragedy, when the doctor said he could do no more for little Sidney, my third born.” Unemployed landscape gardener and mother of several Boglurka Menarch, whose son recently succumbed to leukaemia, told Home Defence. “But when the government sent over their functionaries and explained Sid’s death could do some good for the capitalist state, I was surprised and flattered and not in the least bit despairing, or intimidated.”

“My boy has now been assessed and labelled fit for ‘dead-work’ and next week he starts a job as an anatomically correct doll, for

surgeons to study or manhandle.” Mrs Menarch went on. “It gladdens my heart, knowing Sid’s doing some good and contributing to

the big society. It’s what he would have wanted, if my son had grown up to understand such things.”

The pilot scheme to get the dead working will now last for six months before being expanded, with corpses diversifying into other

lines of work for which they’re uniquely suited. These ‘afterlife careers’ may include house-sitting, customer service, extras in crowd

scenes or, if the technology can be found to develop a convincing ‘wave’ motion, stand-ins for members of the royal family when

they’ve got the squirts. 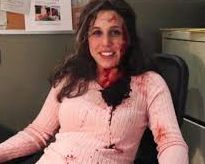 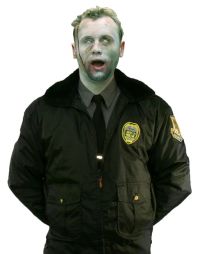 “No Alternative to Idiocy” Claims Village Idiot
20/03/13
The village of Blatney in Yorkshire, where HDUK has come to chat with developmentally restricted local gentleman Rufus
Peckerwood (right), whose role in the community is to speak the honest truth of a simpleton, while providing a counterpoint to the
more ‘enlightened’ views of men and women who don’t spend their days on a wooden style, chewing hay and whistling atonally.
“Bain’t right them thar council can tell moi to change course.” Peckerwood told us in a strangely unconvincing yokel accent. “After
building moi new house out of mud the rains came and down it went. Then the council sent me to some place for ree-tard men
to ‘clever me up’. But once you embrace the stupid path there’s no changing course. Come this afternoon, I plan to ride my penny
farthing off a pier”.
While many in this Yorkshire constituency applaud Rufus’ devotion to a cretinism that clearly isn’t doing him any good, maintaining
that any deviation from his course would be seen as a sign of weakness, others claim Mr Peckerwood should now shy from overt idiocy. They maintain that his

mildly diverting sideshow of ridiculous behaviours, which currently only impacts on farm animals, inanimate objects and the idiot himself, could

soon have tragic effects for the whole area, as Gerry Sprinkler MP told the Blatney Advertiser.

“I’d love to agree with Rufus when he maintains that, in the face of all available evidence, the idiot approach to our world is the best one, and will

eventually solve everyone’s problems.” The Member of Parliament for Blatney confirmed. “But if our resident nincompoop carries on like this he

could precipitate a ‘race to the soggy bottom’ and bring the rest of the country down with him. What if Peckerwood’s role as a public figure

inspires the easily led to embrace harmful thicko measures? He already upsets the kiddies with his guttural animal calls and weird dancing. I

reckon its time to find a Plan B.” 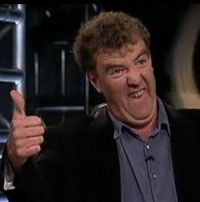