NewsBlast!
"Like news, but more random"
with Clint Panzerdivision & Al Likilla
Home Defence UK
A Symptom of a Greater Malaise

GUY WHO USED TO

Steven Jeffrey Gibbs (27), a resident of the Wiltshire

market town of Salisbury, was said to be "pleased"

yesterday at meeting the bloke who used to play The

the left) was crowned Mr. Universe at the age of 21 before
becoming a professional actor. His appearance in the country came as
a result of Collector Mania 3 and it was in the Milton Keynes shopping centre
which houses the annual toy and sci-fi event where the pair crossed paths.
"I'd taken the Friday off work especially in the hope of meeting Mr Miyagi." Gibbs told Home Defence exclusively. "But when I got there I was told that "Pat" Morita who plays the Karate Kid's mentor had pulled out for undisclosed personal reasons. That was disappointing to say the least, particularly when I found out from an inside source that the supposed 'personal reasons' were actually some kind of general paranoia about flying in the aftermath of the war."
Refusing to be downhearted, Gibbs made the most of his day out, bumping into 'Big' Dave Prowse (Darth Vader) and 'Little' Kenny Baker (R2-D2) before encountering actor Alan Ruck who played the character of Cameron in hit 1986 film Ferris Bueller's Day Off.
"We'd just finished discussing Ruck's post-Ferris career when I spotted a figure I recognised near the stalls of mint-condition Transformers." Continued Gibbs. "There was a fee to be introduced to him, but it was well worth the cash to meet the man who not only starred in The Incredible Hulk television show but also once served as personal trainer to both Mickey Rourke and Chuck Norris".
Gibbs' first impression of Ferrigno was that he seemed "nice, but deaf".
"Unfortunately the fact that Lou can't hear a word you're saying does tend to limit the conversation a bit." Gibbs confirmed. "But then again, if he hadn't had those hearing problems from childhood he might never have been driven to 'maximise his potential' in the way that he has. Lou certainly seemed happy to meet me as you can see from the picture they took of the big moment. That's Dave Prowse in the background you know."
Steven went back to Wiltshire "aglow" while Ferrigno finished the day several hundred pounds richer and returned to his hectic schedule which, this year, includes promotional duties relating to his cameo in Ang Lee's summer blockbuster The Hulk. Although how he took direction on this, or any other movie, without being able to hear a thing is, as Gibbs says, "anybody's guess". 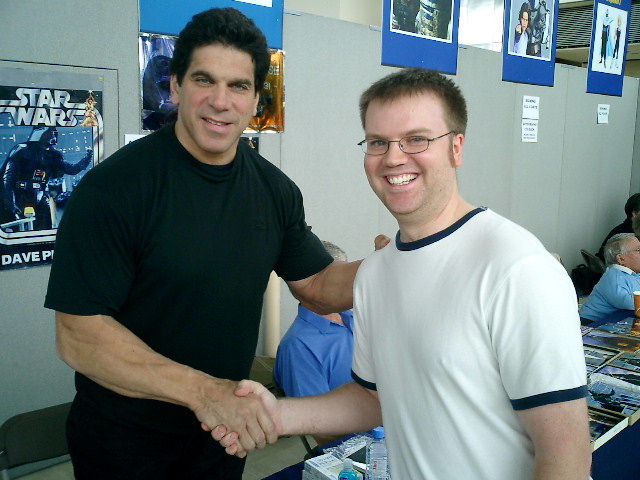 Ferrigno and Gibbs: "Maximising their potential."

News!
HUNDREDS GRIPPED BY MATRIX MANIA
05/06/03
Hollywood blockbuster The Matrix Reloaded is proving a smash hit with Chippenham cinema-goers, with the second week Friday screening pulling a nearly full house.
Local movie buff, Justin Reilly (25), claims that "maybe two hundred people" were packed into the theatre with "hardly any" free seats remaining.
"It was really busy," said Reilly.  "I don't think I've seen it that busy for a while."
The film stars Keanu Reaves as Neo, a cyberpunk superhero fighting artificial intelligence in a computer-generated distopia, and proved highly popular with the audience, particularly the multi-million dollar car chase and the big SFX scene with the replicant Agent Smiths.
Mr Reilly, however, proved to be slightly confused by some of the more complex plot points and, on further questioning, was noticeably surprised to discover that Zion and the "real world" were actually part of a larger "external Matrix" designed in collaboration between the Architect and the Oracle as a buffer zone for renegades unable to accept the Matrix proper, although this is patently obvious.
Mr Reilly currently displays Matrix Reloaded wallpaper on his home PC.
Blast!
REFUSE CUSTOMER IN PHONE RAGE FURY
05/06/03
A temporary office worker was subjected to a tirade of whinging on Thursday by a customer enraged at the service of North Wiltshire District Council's bulk refuse department.
Amongst the complaints levelled were the £18.50 charge for the service, the delay before collection and the necessity of leaving oversized rubbish outside the property.
The temp, who wishes to remain nameless, told Home Defence: "I can see the guy's point, but the drivers are on eleven-hour days as it is, and the department's under-resourced.  Besides, I'm just a temp, what the hell am I supposed to do about it?  I mean, you know, I try to be helpful, but this guy kept going on and on about how he expects this and that, and how businesses have to satisfy their customers, blah blah blah.  If he's such a big fan of free market economics, why didn't he exercise his consumer's right to fuck off elsewhere?"
"I wish I'd thought of that at the time," he added.
The incident is probably indicative of a nationwide inability to separate the people at the end of phone-lines from the faceless organisations behind them..
Oh yes! News!
SPORTS CAREER STRUCK DOWN BY INADEQUACY
06/06/03
Pool-playing hopeful, Mr Andrew Sayles (28), received a devastating blow to his potential career on Friday with the sudden realisation that he isn't actually any good.
The discovery, which Mr Sayles describes as "an epiphany", occurred during an amateur pub challenge in which he lost several games in succession.
"I'm basically rubbish," he said.
The event is likely to go unnoticed by the English sporting establishment.
Blasty-blast!
MYSTERY VIRUS CLAIMS VICTIM
04/06/03
Melksham web designer, Mr Frank Winsley (38), was last week struck down by an unknown virus that left him incapacitated for two days.
Mr Winsley, a father of two, stated: "[the virus] came on suddenly, and hit me at both ends.  I spent half the time on the toilet and the other half sleeping.  It really fucked me up."
It is not suspected that this may be a new mutated strain of SARS, nor the result of a terrorist bio-chemical weapon.
Mr Winsley has since made a full recovery.
NB. HDUK would like to point out that the above stories are researched and verified to the highest standards of journalistic integrity, and are 75-90% true.
If, like me, the regular horror displayed by the conventional news media occasionally makes you think that summarily executing one in three people across the planet in a terrible demented attempt to finally shock humanity out of its seemingly endless capacity for violence and atrocity might be a good idea, it's probably time to take a break and have a nice cup of tea.  And while you wait for the kettle to boil, why not e-mail [email protected], and find out how YOU can help in the development of a BRAND NEW and VAGUELY POINTLESS concept in journalism.
ALL NEWS ROUND UPS:
1