NEWS ROUND UP
with Al Likilla
Home Defence UK
A Symptom of a Greater Malaise
Voter Apathy Linked To
‘Miaow Miaow’
02/05/10
ALL NEWS ROUND UPS:

Shock news reaches Home Defence with the revelation that

the low turnout for this year’s general election, one that has

seen half of all adults not bothering to listen to the candidates,

let alone register to vote, is likely down to the proliferation of

street slang; Miaow Miaow, tigerroar, and puss-in-chavs.
Election watcher and legal high expert Licorice Ukko-Chaka told us: “They’re all at it, getting off their faces on this feline smack. It’s the young folk and working classes who form the problem. They purchase it by the hundredweight at garden centres and pretend they’ve got crops that need fertilising. Then, while they’re massively high and on a major rush, these poor bastards momentarily forget how terrible their lives are. They lose all sense of Labour and the Conservatives promising hope or change or something.”

She continued: “Before you know it, up to 40% of the electorate have lost interest in finding out which

constituency they’re in, what might happen in the event of a hung parliament, or Vince Cable’s latest

campaign trail outfit. It’s almost as if this crazy, evil drug is warping their minds and making everyone

think that politics is pointless. The government really ought to do something.”

Indeed Mephedrone, which has been linked to hundreds of deaths as well as thousands of ill-informed reports and scores of journalists making stuff up, was recently banned with minimal scientific consultation. From this month several new prisons are being built to incarcerate anyone found using ‘Miaow Miaow’ and, after this demon drug is stamped out once and for all, the turnout for future elections is expected to return to around 100%. 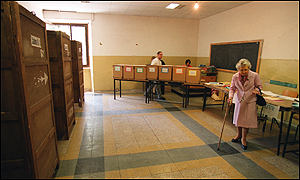 Community Support Officer Glad To Contribute
To Perception Of Crime-Fighting
28/04/10
The streets of London, where Home Defence today met one of the brave, unwarranted, non-police who have
chosen to patrol these mean streets, Pale Crowdsource. We caught up with Mr. Crowdsource (right) who
was out on “high visibility patrol” near Camden Lock where, in his official jacket and faux-uniform, this man
could easily have been mistaken for a police officer. Indeed, the self-styled Community Support Officer felt responsible for the growing impression that something was being done about rampant street crime in the area.
“It makes me very proud to be a part of this.” Pale paused in his duties to tell HDUK. “Tourists see me in my mock-police jacket and stern, hard-man expression, stopping buses to check the tickets of law-abiding citizens or hassling black youths, and they’re instantly misled into believing I have some kind of impact on crime in the area.”

As confused Goths were offered shoddy drugs from nearby dealers who nodded towards Mr.

Crowdsource and muttered: “Don’t worry about him, he can’t do anything”, Pale went on:

“There’s no evidence to support it, but I’m absolutely certain Community Support Officers have

a deterrent effect. I’ve done no end of good, walking up and down trying to look menacing in the

absence of any real police, then occasionally threatening to make a citizen’s arrest, a threat I would

never actually follow through with. If I wasn’t making a difference in the first place then what would be

CSOs were first employed by the British Transport Police as part of 2002’s ‘Police Reform Act’. They were intended to win votes by making it look as if crime was being targeted, albeit without engaging in the hassle of recruiting and training actual officers, men who might be empowered or competent in some way. There are now 16,000 Community Support Officers on Britain’s streets, none of them doing much more than your dad when he briefly joined the Neighbourhood Watch that time.
Back on Camden High Street, after dismissing the threats of a nearby teenage knife-gang as “just kids messing about” and issuing a Fixed Panalty Notice for a dog owner while his beagle shat on the pavement, Mr. Crowdsource
continued:

“I’ve always wanted to trick people into thinking I was doing something for the well-being of
society and as a CSO I can. While I was too useless and short to ever make the force, now I can
bore friends explaining I’m at the forefront of the fight against crime. I bother shifty-looking blokes
whenever I’m on duty and then talk about the imaginary risks to female exchange students who
giggle and mistake me for someone impressive - it’s a dream come true. This whole thing makes
me feel as if I’m achieving something with my days even if, to the uninformed observer, I could just
resemble some sad-sack, trudging about in the rain.”

As the results of election day grow imminent, all around the globe countries have united in

failing to follow the UK election, none expressing any interest whatsoever in its outcome. In fact, whole continents are currently unaware anything is even happening in British politics and, if they do have some inkling, that’s only because their children accidentally turned on a TV channel covering the electoral process before quickly switching back to ‘Glee’.
As psephologist Franny Umeboshi advised HDUK: “All around the world, from Iraq to Australia to Afghanistan, peaceful and war-torn countries alike are experiencing utter ambivalence towards our general election. To the UK media and some sections of the public the potential for the Conservatives to come to power for the first time in 13 years or the Lib Dems to pull off a shock result is noteworthy and even rather interesting. This is not a view shared by the planet as a whole.”
Indeed, all evidence points to few aside from British nationals caring one way or the other when the results
are called, with only an estimated 0.002% waiting with baited breath for the outcome. As France’s Foreign
Secretary Jacques Starling (right) puts it:

“Zey are all ze same, it makes no difference to us. Right or left, we have no respect for les rosbifs.”
<spits>
Meanwhile across the pond, Hilary Clinton was heard to observe that it was “nice” the UK could successfully hold a democratic election, while President Obama has privately promised to keep a straight face and pretend to take seriously whoever the UK elects as Prime Minister, be it “that Scotch fellow” or “one of the other guys”.

To the Internet, and today the CEO of foremost shopping site Amazon.com, Kiln Ponce, announced a foray into the debt re-parcelling and financial mismanagement sector with the formation of a new ‘Amazon Sub-Prime’ service. Mr. Ponce hopes this initiative will be a long-term success, changing the way his organisation operates and actively
contributing to the downturn of the global economy.
“Our system couldn’t be simpler.” Mr. Ponce told Modern Bankrupt magazine earlier this week. “Amazon uncovers your credit rating, does an assessment of your debts and then, depending on what type of loans or mortgages you have purchased and enjoyed in the past, offers a range of default credit swaps. These involve bundling together the monies you owe and selling them on worldwide, until it is virtually impossible to trace the outstanding obligations back to source. Here at Amazon Sub-Prime we guarantee that your toxic debts will ultimately find their way somewhere like the far east, where they will be bought by a number of

semi-legal organisations with links to the Triads. At this point our responsibility to you is over.”

service over the coming year, unaware that the end result will be the loss of their homes and the

commencement of a whole new phase in the global economic crisis. It is expected that, by 2012, this

whole damn house of cards will come crashing down, ending with a number of speculators killing