Home Defence UK
A Symptom of a Greater Malaise
NEWS ROUND UP
with Al Likilla
ALL ROUND UPS:
Confusion Over Scope of ‘Granny Tax’ Leads To Hundreds of Grandmothers Being Abandoned In The Street
30/04/12

First up to the highways and byways of England, where the consequences of George Osbourne’s March

budget, known informally as the ‘Screw the Poor And Make Their Pasties Unaffordable’ initiative,

continues to be felt. The shockwaves have rippled out to affect the unemployed, working classes, women

and non-whites across the land. But the worst hit have been the elderly, who are prey to confusion and

rumourmongering around the new Tory-patented ‘Granny Tax’, as, it seems, are their families.
“Things are hard enough right now without having to pay extra for every granny I keep under my roof.” Building Contractor Dustin Mummichog (left) told his MP during a session HDUK sat in on near Whitby. “What with remarriages, stepfamilies, people living longer and kids calling any old person they feel affection for ‘gran’, some of us

are homing five or six grandmothers these days. I offered to put up a couple of extra ones out of the goodness of my heart

rather than see them stuck in care homes where they’ll inevitably get abused, and this is the thanks I get. With this new tax I

panic every time the doorbell rings. Only this morning I found myself hiding mine and the neighbours’ grannies in our basement

where the Inland Revenue can’t see them.”

“But once they’re down there those old women do nothing but complain about the damp, trade gossip on ‘Sheila down the road’

or demand someone come and make them tea.” Mr. Mummichog went on wearily to his elected official. “I’m at my wits’end.”

Apparently under the impression they will be liable for huge ‘Granny Tax’ payments come the end of the financial year, many English families have been leading grandmothers to parking bays outside council offices and leaving them there, or even tying one elderly lady up in a sack with some bricks and throwing her in the canal. When questioned, the police say these myths about the so-called ‘Granny Tax’ have been spread by unscrupulous entrepreneurs,men in cheap suits who buy OAPs in bulk from impoverished UK citizens and then ship them off to China or Brazil as cheap labour for booming economies.
“We urge people to listen to the official announcements and not do anything rash. Some people have simply got hold of the wrong end of
the stick.” A government spokesman repeated on the news until he was blue in the face earlier. “What everyone must realise is that the
Chancellor closed this loophole as a means of bleeding old folks dry of their life savings. We’re taxing the arses off grannies, not taxing
people for having a granny.” Before adding under his breath: “You unbelievable idiots.”
But as Home Defence went to press it appeared the message wasn’t getting through, with fifty grandparents discovered in the back of a
truck trying to smuggle themselves out of the country, and the Queen said to be desperately hiding her assets through a number of
inventive tax dodges. 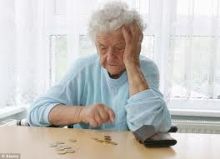 A newly-taxed Granny desperately tries to make ends meet.
This woman was found in Argos, lost and confused.
Increased Sexualisation of Miss Piggy Creates Body Image
Issues For Female Piglets
21/04/12
Next up to Hollywood, California, where the success of the recent Muppets reboot and the appearance of its charismatic leading lady on red
carpets throughout the movie world has led to concern from feminist groups and pig farmers alike that Piggy’s violent glamourpuss persona and
exotic, strongly-sexualised image, are setting unrealistic expectations for adolescent piggy-wigs everywhere.
“I’ll admit that she’s done a lot for our profile as a species.” Equal rights campaigner and leading public oinker Alexei Swine told Home Defence.
“But take a step back and look at the body on her a moment. Piggy must be a size twelve at most. That kind of shape is a ridiculous goal for a healthy, female pig. You can see she’s on some kind of low-carb diet; as Piggy herself admitted in an interview with What Pork? magazine last month. Yet this pig is depicted in her latest film eating doughnut after doughnut while editing Paris Vogue.”
“It’s a very bad example for impressionable piglets everywhere, many of whom have to subsist on a day-to-day diet of nothing but swill.” Ms. Swine concluded.

But not everyone believes body dysmorphia in ordinary pigs is a growing epidemic, or the claims that many of them are demanding

mirrors and ‘pig gymnasiums’ installed in their specially-modified sties. Most certainly aren’t of the opinion this can be traced to a

Babe.” Gruntle told us self-importantly. “These young piggies have their own issues which are nothing to do with my client; that

most famous of all Muppets. Besides, what’s so bad about having Piggy as a role model? Maybe youngsters will start to

believe they can end up as something more than breakfast thanks to her example. What Miss Piggy proves is anyone can grow up

and dress like a slut for Vanity Fair photo-shoots before engaging in a cross-species relationship with a frog. She’s a great

example for the kids. Mwah!”

The generation that will suffer.

Report: 80% of British People Bored By The Olympics

To East London, where final preparations are underway for what promises to be the greatest thing, sporting or otherwise, in the

history of planet earth (at least since the Big Bang). But excitement at this cavalcade of nonsense, with the opening ceremony now

less than three months away for fuck’s sake, has been undercut by an IPSOS / MORI poll today revealing only one in five UK

citizens could give a flying shite for the whole endeavour.
“I mean, it’s nice to be the centre of attention, and hopefully the country will put on a good show for everyone.” London-based
househusband Gilfy Sagaponack told HDUK exhaustedly when we vox-popped him in the street. “But every time I turn the TV on
it’s Olympics-this, Olympics-that. The newspapers are full of it. Could there be a terrorist threat? Is sailing a battleship up the
Thames the best way to guard against suicide bombers? Will the transport network cope? Might it rain? It’s really starting to do
my head in. And every time that Seb Coe comes on TV my four-year-old starts crying; there’s something about that guy children
just don’t like.”
Mr. Sagaponack then dragged his screaming kids away down the road, leaving us with this parting shot: “I never liked bloody sports day anyway. Not at school, and not now.”

While a small minority of Britain’s inhabitants feel excitement for events like fencing, synchronised swimming, ‘whiff whaff’ and

dressage that will be taking place on our shores, and a whole load more say they’ll start to pay attention if the UK wins a medal

(“because they are made of precious things”), it seems the overwhelming mood is one of ambivalence. At present this is coupled

with a patina of resentment at the quantity of tax money expended putting the event on, funds that could have gone to improving

Panic Buying Confirmed As England’s New Favourite
Austerity Pastime
03/05/12
The shopping centres of rural and urban England, where a new craze has overtaken a nation languishing in double-dip recession,
rising joblessness and the constant threat of strikes. In the wake of a fuel panic where there was no actual shortage, bored
consumers and people with too much time on their hands have expanded this hobby to other, everyday purchases.
“This was always going to happen when times got tough.” Johannes Peristalsis, a systems analyst from Kettering told HDUK when we bumped into him in Aldi where he was purchasing four hundred jars of beetroot and three toasters. “In the current economic climate any product could become unavailable tomorrow. That’s why I’m getting this on my credit card now, just in case.”

“I like the feeling it gives me.” Johannes continued, loading up while an overworked shelf-stacker watched nearby,

wide-eyed. “This reminds me when I was little and my parents used to prepare for the possibility of nuclear war.”

can ever need. This has impacted on stocks of a variety of products including bread, milk, stamps, steak slices from Greggs

and copies of the hit novel ‘The Hunger Games’. Shortages have come about because of hearsay, spread by unidentified

sources (some claim with links to the government) that we’re running out of everything pretty soon. Homes across Britain are

now the scene of much pointless stockpiling, while families have sold cars and 4x4s to make more room for canned produce,

bottled water and multiple iPads in their garages.
“In times of difficulty men and women will often take comfort in buying a huge pile of stuff.” Economist Ciaran Yumbots
confirmed over the phone. “With so many not having jobs, people find themselves with nothing else to do. Our Capitalist society
won’t let us get away with buying nothing, so this is the inevitable end result; empty supermarket shelves and every available
cupboard overflowing with nothing we’re ever going to use.”
“Research shows this kind of purchasing pattern adds excitement to the sad, empty lives of UK citizens.” Mr. Yumbots went
on. “I know that from experience. The last time I went up our superstore it was like something out of Mad Max, only with
trolleys.”

Lord Coe: "something about him children just don't like".
Jesus Christ.
1