The offices of the Food Standards Agency in Holborn, Central London, where board member and nutrition consultant Basil Sutler is

to make an announcement on behalf of the government. His words are expected to confront the issue of soaring food prices, which

will hit an all-time high in 2013 thanks to corn and soybean crop failures, meaning a lack of animal feed for farmers. This is likely

to combine with more general issues such as inflation, the recession, and extreme weather as a result of climate change,in

exacerbating the situation.
“We know all about the rise in agricultural commodity inflation that's leaving families unable to cover their weekly grocery bills.” Mr. Sutler told the assembled hacks. “But it’s difficult to do anything about it, or the underlying causes like profit-hungry supermarkets and the absence of jobs, simply because we’re so ineffectual.”
“So let’s try a different tack instead.” Basil went on. “Just as the coalition has moved the goalposts on poverty, meaning internationally recognised levels no longer apply to the UK, we can officially designate most foodstuffs a luxury; something everyday people can do without.”
“After all,” Sutler joked. “You don’t see starving Africans demanding sugary treats, or coffee and biscuits, do you?”
The solution is widely seen as a stopgap, tying in with the growing trade in food banks, a resource that now sustains many dependent families, supplying products once thought of as essentials like milk, fresh meat and Coco Pops.
“Still, I’m not sure a purely taxonomic approach is going to fill anyone’s bellies, even if the country does finally come out of
George Osborne’s much-anticipated triple-dip recession.” Single mother and economics PhD Coot Tarbosh told Home Defence
when we saw her at our neighbourhood shop, buying sacks of flour and grain to keep her sons alive over winter. “My gut feeling is
that the government is only conducting this reclassification so that, after spending my meagre benefits on a bit of sugar or
cheese, they can stand up in the House of Commons and condemn women like me for being profligate and feckless.”
“So sorry, I must get going.” Miss Tarbosh apologised. “Some rich man is allowing me access to his garden later, and I’m hoping
to find edible plants I can boil up as soup for my children.”
Home Defence UK
A Symptom of a Greater Malaise
NEWS ROUND UP
with Al Likilla
ALL ROUND UPS:
Nick Clegg Agrees To Be Put In The Stocks As Penance
07/11/12

A hastily-constructed ‘public humiliation’ area outside the Houses of Parliament, where

later today the man who somehow still leads the Liberal Democrats, Nick Clegg, will be

debased for a period of not less than 24 hours. This punishment has been agreed upon by

everyone, following as it does Clegg’s failure to gain forgiveness for his junior coalition

partners, and all the evil done in their name.
“This is where Nicky will place his hands.” Stocks operator and former LibDem party member, Gully Contoocock, told Home Defence when we popped along to see the restraining equipment. “The wood drops down here, rendering Cleggy immobile. He will then be vulnerable to those who’ve been done wrong by him, as well as passing members of the public with a grudge. We urge these people to stand a few feet away while hurling eggs, abuse, or their own excrement at Nick’s prone form.”

“I’ll be on hand to stop things getting really nasty.” Gully assured us, folding his burly arms. “We don’t want Nicky being physically

mauled, or someone pulling down his trousers and interfering with the Liberal Democrat leader while he’s in such a prone position.

However much a good buggering may go some way to ‘making right’ everything he’s done to our country. Ha ha ha!”

This extreme measure comes after Clegg’s latest apology (left) had little impact on his party’s infinitesimally tiny poll ratings, with

the LibDems actually losing their deposit in the recent Corby by-election. Indeed, psephologists can demonstrate that the

Liberal Democrats remain well below UKIP and the Greens in the polls, with one report suggesting that, were the Nazi party to exist

and run at the next general election, even they would get more votes than Clegg and company.
Indeed, Nick’s previous, much-mocked act of contrition was viewed as regrettable grovelling by many party grandees. In it, Clegg put on a sad face to read out a list of everyone whose lives he had made worse since coming to power. This began with students and public sector workers, moving on to close personal friends and ‘the poor’, before ending on individuals within his party who Nick personally upset with his amoral uselessness.
As the live, televised footage shows, this list took an hour to read and the transmission only ended when Nick broke down, curling
up in a ball on the floor to blubber, before pressing his face up against the camera and crying “please forgive me”. At this point
Vince Cable stormed on, ran a finger across his throat and yelled “shut it down”. The screen then went black.
Clegg’s time in the stocks is generally seen as one last shot at redemption and tonight, as dusk sets over Westminster, HDUK
watched a nervous Nick being guided to this contraption where he fell to his knees to be restrained. Over the coming hours, many

him with rotten fruit and fish guts, while Nick whimpered his apologies through a haze of animal offal.

Those who came to express their anger were expected to leave feeling much better and less violated, as one Honeychile

“It’ll be really good to get my loathing for Clegg and everything he stands for out of my system. I intend this to be a cathartic, emotional

night.” Mrs Libor asserted, her voice cracking. “I’m pretty convinced now that Nick is sorry for everything he’s done to the nation. If we’re

lucky, he’ll have plenty of time to think about his mistakes. This is going to do everyone so much good!”

She went on: “Someone was saying, if this is successful overnight, Clegg might stay in there all winter.” 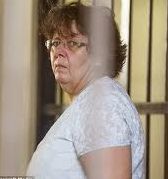 Ann Widdecombe ‘Set Upon’ By Gays
17/11/12
To Maidstone in Kent, where television personality and former member of parliament, Ann Widdecombe,
recently appeared in public fresh from her anti-homosexual march at the Tory Party Conference,
laughing as she walked happily down the street. But Ann’s good mood suddenly changed for the

worse, when Widdecombe found herself the victim of a terrible ‘pink’ crime.

through our town centre, looking all self-righteous and highfalutin like she always does.” Plumber and eyewitness Budge Railing told the local

news. “Before I know it, this rainbow Volkswagen pulls up and out pours a group of drag queens, butch lesbians and mincers in shorteralls.

They grab Widdecombe and bundle her into their garish vehicle, giggling all the time. Then they sped off, leaving us all nonplussed, Ann’s

screams of terror lingering in the air. God knows what they want with her.”

Widdecombe (65) is a charmingly misshapen public figure with quirky views to match her appearance. She is vehemently anti-abortion,

rabidly pro-death penalty, and a climate change denier, who abandoned her faith in protest at the progressive side, converting to Roman

Catholicism out of a disgust at Christianity’s willingness to ordain women.
Yet it is her anti-bumming stance that has got the former Strictly Come Dancing star in hot water. Ann’s abduction by homos follows
her recent claims that gay lifestyles “do not have equal validity” with other humans, and attempts to secure psychological help for
imagined “unhappy homosexuals” who want to change their orientation through counselling and science. Still, Widdecombe’s
anti-gay activities have made her enormously popular, with those middle-aged fishwives and red-faced Brigadiers who make up the

Conservative Party base, as one of the latter told Home Defence anonymously:

“They need to send in the SAS to rescue Ann immediately; this is a top priority. She’s a figurehead for us all

in the pro-virginity ‘refraining’ movement.” An ex-Military man (right) snorted. “Take me, for instance. I’ve known I was a queer for years, but

thanks to repression and self-disgust, I’ve never acted on my unclean urges. That’s why people like me respect Ann. The problem with

benders nowadays is that they'll just kidnap people they don’t like in broad daylight then try to ‘turn’ them. No sense of restraint; not like in

As HDUK was going to press, none of Ann’s hated ‘gay lobby’ had taken responsibility for this abduction, although the police were said to be

studying an anonymous note, apparently from the group holding Widdecombe. In it, those who set upon Ann stated they “just want enough

time to brighten up the old frump” and have no demands, beyond “needing her to shut up”. 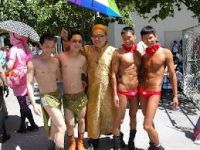 Poor Accept Responsibility For Their Plight
12/11/12

To a run-down village outside Chester where today, in a special ceremony hosted by the Chancellor of the Exchequer and Iain

Duncan-Smith, a single representative of UK poor people, one David Eedgess, took collective blame for a swathe of societal

impoverishment. All responsibility was thereby abdicated from our elected rulers, their economic policies, or the set-up of a

British society that continues to labour under the strictures of late-period capitalism.

“It’s true.” A confused looking Eedgess (right) announced from the podium, as various members of the

coalition government nodded their approval behind. “I only have myself to blame for being perpetually broke.
I should have tried harder, or maybe done more, or else my parents’ should. The blame can most definitely be laid at my door, oh yes.”
He went on: “It’s the usual story; we’re less deserving and we know it, so we get nothing. I’ve worked hard whenever I could, but it never
seemed to quite come off. Maybe I did something bad in a previous life, who knows?

“Whatever the reason, the sorry state I find myself in is nobody’s fault but my own. The last thing I want is to demand some increase

in state benefits to help me survive, or band together with the other plebeians and start civil unrest to draw attention to the widening

gap between us and the rich, no sir. The wealthy are morally unimpeachable, and I could learn a lot from them. It’s me who’s fucked it

Shortly after the ceremony concluded, the poor released a statement confirming they were officially to blame, and would be seeking

no reparations in the form of wealth redistribution or increased taxation of the wealthy. This document was signed by all the United

Kingdom’s estimated twenty million poor and, in response, George Osborne (left) could be heard to mutter: “Phew, that’s a relief.” 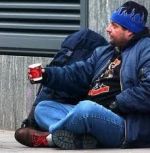