and onlookers were treated to the spectacle of Her

Majesty The Queen, on the occasion of her official

birthday, abandoning The Colour before it was entirely

Trooped for the first time in her extensive reign. The Monarch’s decision subsequently resulted in disarray among the British infantry and armed services in attendance, all of whom expected the afternoon to end with ‘a full and comprehensive Trooping’ as usual.

“It was supershocking! The Queen turned up okay and got halfway through Trooping her

Colour then she just stopped. We were squinting to see what was happening when Lizzie

looked at her watch, then started back toward the Phaeton Carriage where Prince Philip was

napping. The last thing we saw was the Queen putting a massive, bejewelled crown on her head

and directing the driver to take them back to the Palace. There wasn’t even a thumbs-up for her

loyal fans.”
“A bunch of guys I guessed must be troops were left standing around in full regalia, just staring at each other.” Mr. Doodle went on. “It was obvious they had no idea what to do next. Eventually some got on with the rest of the Trooping by themselves, but everything was a bit half-hearted after that so I went to get some burgers. In the queue someone said they thought the Queen must have felt guilty about the poor and unemployed, all suffering while she’s out there doing this wacky stuff. That’s why she cut the ceremony short; to save the taxpayers a bit of moolah. If so, God bless her.”
Trooping The Colour is a mysterious tradition that coincides with the publication of the sovereign’s
Birthday Honours list and has done so each year since the 17th century. Despite being televised, the
event remains entirely inexplicable to around 99.9% of the UK public but, as far as HDUK can tell,
it involves the Queen meandering down the Mall from Buckingham Palace with a Household Cavalry
escort consisting of some serious looking lads on horses. On arrival at Horseguards Parade she
will then be given the Royal Salute (similar to a regular salute, only aimed at a Royal), and
proceed onwards. Yet, this year, The Queen was seen to give only a vague wave, then inspect her
troops in what onlookers describe as a ‘cursory’ and ‘slapdash’ manner.
Ultimately, before the mounted troops could perform their much-anticipated ‘trot past’, the Queen apparently gave up altogether and buggered off home. While a number of theories were soon doing the rounds, from the possibility that Elizabeth II was “feeling a bit poorly”, to the idea she might have to hurry home and sort out some kind of PR mess involving Sarah Ferguson, the official line, when it came out, was fairly unambiguous.

conference that same evening. “And it's just another example of the Queen feeling her

subjects’ pain while trying to save them as many readies as possible. The Colour has

been Trooped annually for the last four hundred years, and Liz concluded

standards would not suffer if parts of it went un-Trooped, just this once. We are aware

some of the unions have subsequently complained, citing health and safety issues or

because of this lack of Trooping, but to them I say; look at the economy, stupid! All of us

are in the same boat.”

“The Queen simply didn’t want to look as if she was revelling in opulence at a time of hardship for so many.” Doseph continued. “This lady has a conscience, particularly when it comes to the untold millions in public money her family squanders every year. That’s why she waived her 2010 appearance fee and will likely Troop sections of the Colour on an ad hoc basis going forward. There is absolutely no truth in the suggestion The Queen was tired and sweaty and simplycouldn’t be bothered.”
Over recent months the Queen has cut back around 12% of her family’s expenditure
through a series of measures including the sale of her personal helicopter, the
postponement of Windsor Castle’s roof-fix, and a reduction in the number of equerries
available to test Prince Charles’ boiled eggs of a morning. Elizabeth and Prince Philip
also saved a considerable sum by reducing the number of foreign trips they undertook
this year, although cynics have suggested this was less to do with cost-effectiveness
than the increasing immobility of the octogenarian couple (along with a need to reduce
the embarrassment caused by Philip’s casual racism).
Further to these savings, those who turned up for 2010’s Colour Trooping report that the
potential for anti-climax was signalled early on, when the usual roster of five hundred
musicians was replaced by a single piper and three London buskers performing cover versions of Coldplay songs.

In addition, Royal Watcher Jasmeen Ormerod has been quoted in the Sunday Express,

saying: “Her Majesty doesn’t seem up for it this year. Usually she’s like a little girl at

Christmas, but some of the staff reckon she’d forgotten all about The Colour and the

need to Troop it this time out.”

In the end the Queen was reminded by a phone call from Prince Andrew the night before.

Otherwise, some observers suspect, she may not have turned up at all.

Back at Buckingham Palace after the semi-complete Trooping session, Queen Elizabeth apparently returned to her chambers “rather than watch any more bloody marching”. Yet the traditional 41-gun salute still took place, with the rest of the Royal Family watching from a balcony as William and a clearly
intoxicated Prince Harry yelled their encouragement before being drowned out by the
RAF flypast. Meanwhile, across the rest of the Commonwealth, events involving The
Colour were also scaled back, Canada and Malaysia preferring to hold intimate ‘invite
only’ events. And in Australia attempts to troop what little Colour they still possess
ended in farce, as a gaggle of koalas escaped from a nearby zoo and attacked the
marchers. This caused much delay and upset until the cuddly bears were shot in the
head with tranquilliser darts.
The Palace is expected to take a view on the 2011 Colour Troop nearer the time but,
should Britain enter George Osborne’s eagerly anticipated ‘double-dip recession’ by
then, the expectation is that the Colour will be put away next summer and remain in
storage until further notice.
What do YOU think about this news story? Join the debate NOW on Home Defence's NEW, INTERACTIVE
message board Points of You!
NATIONAL NEWS
with Al Likilla
Home Defence UK
A Symptom of a Greater Malaise
New ‘Austerity Queen’ Only Troops Half The Colour
31/08/10
ALL NATIONAL NEWS: 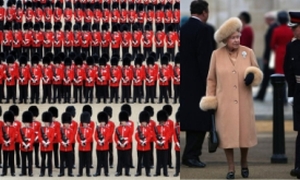 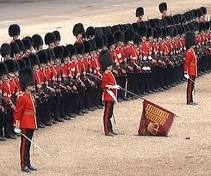 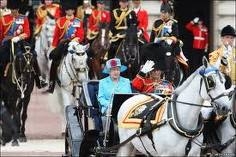 A disoriented Colour try to calm un-Trooped horses.
The Queen legs it, off for an early night.
Concerned relatives look on.
What next for these dejected boys?
1