Britain’s leading award for the visual arts, the 2010 Turner Prize, upon the

entire staff of best-selling right-wing newspaper The Daily Mail.
“This is a deserved moment of recognition for one of the country’s leading purveyors of a unique
and challenging worldview.” Serota intoned during the introduction to his announcement. “Our
winners this year have often proffered outlandish stories as ‘news’ in the past, delivering an
occasionally Situationist but more often surreal take to a massive readership with an entirely
straight face, and for this they should be commended.”

“Yet, over the past year,” Serota went on. “The Daily Mail’s editorial team has taken this vision to a whole

new level with such classics as “Nick Clegg In Nazi Slur On Britain” (above) and “Partygoer, 23, Blasts

made-up bit). The entire judging panel, led by myself, feel that this publication deserves a moment of

recognition because of its determination to have little more than a tangential relationship with the facts.

apparent that everyone associated with The Daily Mail would be worthy winners.”
The Turner Prize began life in 1984 out of a miasma of scandal and has provoked controversy on a regular
basis ever since with its support for transvestites, lights turning on and off and Tracey Emin (right). This
award is traditionally presented to a British artist under fifty who has gained recognition among the
pseudy art cognoscenti during the preceding twelve months, and who then receives a £40,000 cheque,
a massive amount of attention from the media, and the opprobrium of idiots nationwide. Indeed, it has now
become traditional for the ill-informed to rise as one following this annual announcement and chorus:

the phrase “Where’s Allah When You Need Him?” in Morse Code on a continuous loop, a reproduction of the

bellybutton fluff and a forty minute film, sourced directly from CCTV, showing a man ordering a kebab while too

Ultimately though, all these competitors would lose out to the UK’s second biggest selling daily, first published

in 1896 and which, during its century and more in print, has supported both the Fascist Party and Hitler

Czechoslovakia shortly afterwards). Other notable landmarks for The Daily Mail include its failure to support

Apartheid boycotts and the endorsement of forced conscription while, more recently, the publication has delighted its siege mentality readership by accusing the BBC of fostering a left-wing conspiracy, linking
cannabis to the death of youngsters who hadn’t actually taken it, comparing the movie ‘Kick Ass’ to the
murder of Damilola Taylor and running the front-page headline: “Abortion Hope After ‘Gay Genes’
Finding”. This last being not just offensive, but wholly devoid of sense.
“Today represents the first recognition of a groundbreaking publication’s most fecund period.” Art critic Beth Early-Adopter told a sceptical Mark Lawson on today’s episode of The Late Show. “Ever since editions during the early part of World War II depicted The Daily Mail campaigning for Jewish refugees to be sent back to Germany, this rag has stretched the definition of what a newspaper should do. Indeed, recent years have seen The Mail become less a source of reliable information for the news-hungry public, than some media-savvy insider’s idea of an elaborate joke.”

As the Floor Manager gesticulated wildly for her to stop talking, Ms. Early-Adopter went on:

“his dirty gay lifestyle” that really made the art establishment sit up and take notice, as it did for many

money awarded by The Turner might seem a lot to your average man in the street, but the Mail has made payouts to dozens of public figures they invented stories about and who subsequently sued them and won. There was the hundred kay to Alan Sugar, the same to Elton John and so on; the list’s as long as your arm. Populating all those pages every day with this kind of fictional nonsense doesn’t come cheap. The editorial desk, overworked copywriters, and everyone else involved in The Mail’s conception are worthy winners.”
Indeed, iron-fisted editor Paul Dacre (right), on accepting The Turner Prize from a radiant Heather Mills, was
quick to heap disdain on the whole event, his speech characterised by vituperation and flying spittle as the
editor berated the artistic establishment, free-thinkers and all the ‘weird types’ in attendance. Dacre then
called The Turner Prize “a waste of good, honest Britons’ time” and “basically moronic”.

The Mail’s editor followed this by launching into a rambling attack on asylum seekers, “dole scroungers”

and promiscuous young women he’d heard about who liked nothing more than going out virtually naked,

downing twelve Bacardi Breezers, and getting knocked up so they could receive a council house and

sponge off the state for the rest of their lives.

whoops and cheers from many of the bright young things present. One audience member (left), a

legend Dennis Taylor, proceeded to yell her thoughts at Home Defence over the ringing applause:

“I love that guy. I don’t how he does it - staying in character like that all the time. He’s funnier than 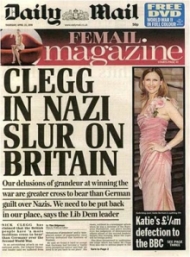