To the House of Lords, where extreme measures are under debate

aimed at tackling the culture of binge drinking that continues to

enshroud the British Isles in a boozy fog. This new approach has

been put forward by Gordon Brown’s Labour party and contains a host of measures, some innovative and some

apparently pulled from their collective bottom at random, to replace those implemented last year which entirely

“In summary, the ruling party are trying a bit of reverse psychology on the nation’s pissheads,” Left-leaning

time Her Majesty’s government totally bottled it, if you’ll pardon the pun, and gave up on the 50p a unit rule

that might have led to a plunge in support. After all, about five million alcoholics live in this country, and

most of them have the vote. Now we’re looking at taking a different tack, trying to remove the mystique

by placing drink on sale everywhere and encouraging young kids to try it as soon as they can. That way,

not only is the taboo destroyed, but the treasury gets oodles of extra cash through taxation. They could

really do with that.”
One aspect of this scheme involves placing whisky, beer and some of the classier ciders directly onto the
racks at Boots, Poundland (right) and Ikea, thereby exploiting the general public’s impulse buying
tendency, along with the need experienced by most males to get their heads up while out shopping.
Additionally, ID will no longer be required to purchase Mad Dog 20-20 and alcopops, while in an effort to
save the Great British Public House from extinction, under 18s will be allowed to drink within hostelries.

of gaudy promotions and staff beckoning at them enthusiastically. Once through the

doors, so the theory goes, pubescents will quickly realise there's nothing mysterious or exciting about sitting in

These proposals will also specify that children under eleven must be accompanied by a parent in bars or pubs,

whereupon they will subsequently be required by law to purchase bar snacks such as ‘Mr. Porky’ pork

scratchings alongside their drinks, both for aesthetic reasons and “in order to soak up the booze”.
“This is just another case of grasping at straws from a discredited party and a limp-duck Prime Minister.”
Opposition MP Horatio Gurn told BBC News 24 as details of the proposals filtered out. “They’ve tried
everything from changing the licensing act to facilitating 24-hour alcohol consumption, all in the hope it
would somehow solve the problem. Remember that scary ad campaign with the talking bladder that
ruptured after a night on the sauce? Or the big fanfare around cutting Happy Hour to fifteen minutes?
None of it did any good, people just drank faster. And what was all that nonsense about bringing in a
‘cognitive behavioural approach’ and ‘motivational interviewing’ to help alcoholics? Labour flew alleged
experts in at taxpayer expense to teach binge drinkers how to limit themselves to a few glasses of wine with their dinner. Well, that was the final insult. I’ve seen the footage and none of it did any good. Those Continentals ended up completely shitfaced.”

“Things will be very different when we Conservatives have power.” Mr. Gurn (left) went on. “We’re not beholden to

the powerful drinks industry. I couldn’t care less if I contribute to the downfall of that recession-hit trade. The

Tories will up the price of Special Brew, increase police powers to beat up the intoxicated, and imprison anyone

who participates in drinking games of any kind, even if it’s in their own home. Particularly ‘Fuzzy Duck’, I hate

that one. Maybe then I’ll be able to get an ambulance for my elderly mother on a Saturday night when she has a

funny turn. If an illegal drug were causing this devastation we’d be up in arms, and probably under a state of

Horatio Gurn was later forced to retract this statement by Conservative party leader ‘Diddy’ David Cameron, the latter saying: “We have no plans to do any of that shit.”
Britain now has the highest rate of stupid drunkenness in Europe, with most youngsters listing binge
drinking as one of their top hobbies, alongside social networks and tombstoning. The estimated cost to
the NHS currently stands at £2.7 billion a year from a million admissions to A&E and five hundred deaths
on the roads. Our current definition of a ‘binge’ is five or more alcoholic drinks for a man, or four in relation
to members of the lady sex, and much of this is consumed at a pace that would make a teetotaller’s eyes
water. Over time this pattern leads to cirrhosis of the liver, dementia, heat disease, pancreatitis, mental
psychosis and death; either by poisoning, choking on your own vomit, or falling off a wall while dancing in

a silly manner. Thanks to the expense of treating sufferers while clearing gallons of sick

and piss off the nation’s streets, a 2009 survey listed binge drinkers as the number two

scourge of British society, after MPs.

issue, probably since bullying people into abstention has entirely failed. The Prime Minister

will shortly give a statement to the House of Commons where, in an affectedly thick

Scottish brogue, he will call those who disagree with his plans “cunts” and deride anyone

who doesn’t come out and get smashed immediately as a “killjoy” or “backdoor trader”.

Many insiders believe this overture to be a stroke of genius, since the promise of an

evening getting leathered in Gordon’s company is enough to

turn many off alcohol for life.
Home Defence attempted to gauge the popularity of these measures at our local pub, telling worse for
wear individuals about government-funded drinks promotions, and how Brown hopes to end the tutting
that surrounds the habit of going for an all-day session. One man standing by the fruit machine
responded:

“Thass brilliant, s’about time the guv-ment did something for blokes like me. I’d vote for them if I
weren’t so pissed all the time. Mine’s a Baileys if you’re offering.” 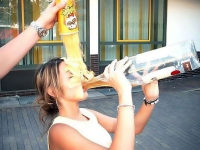 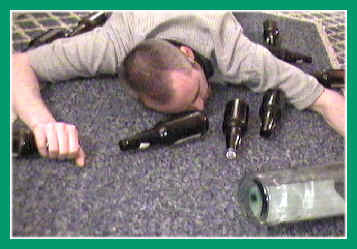 An empowered post-feminist celebrates the good news,
Horatio Gurn M.P.
That's going to be quite a hangover! lol!
A popular drinking game the Daily Mail has branded "evil".
1