NATIONAL NEWS
with Al Likilla
Home Defence UK
A Symptom of a Greater Malaise
Prince Harry Unhappy About Second Middleton Pregnancy
“Now I Have Five to Kill!” Whines Aspiring King of England
14/10/14
ALL NATIONAL NEWS:
To Clarence House, the official London residence of Prince ‘Harry’ (nee Henry), his pater Charles and stepmum Camilla.
Here, among the ever-present hormonal teenagers and obsequious tourists who lurk outside the gate, waiting for a glimpse of
their ginger hero, rumours are rife that the recent announcement of a second niece or nephew for the young Windsor Prince was greeted with a less than warm
response.
“Harrs hides it well, but he’s starting to dislike that Middleton brood-mare.” The Prince’s best bud Crispin Blazing-Squad told us. The son of a Viscount, Mr Blazing-Squad has been crashing on Harry’s sofa for months, and is well placed to give Home Defence exclusive insights from within. “Think about it – before she got her hooks in William, my mate was third in line to the throne, which isn’t a big leap at all, not with such an elderly Queen. Then along comes Prince George and now another and who knows how many they’ll end up with? What if she keeps popping them out, once a year, forever? This is really setting back
Harry’s nefarious plan to occupy the Kingship of the Commonwealth by force!”
Crispin (pictured left with Harry), who describes himself as a ‘professional wastrel’ on LinkedIn and is said to personally know a drug dealer in every city of the
world, may have been telling the truth or could just have been watching too much Game of Thrones. Unfortunately HDUK couldn’t stop his jabber long enough to
work it out so we allowed him to go on:
“When I found out what Harry intended I immediately warned him about ‘the breeding’. It was specifically done to stop him getting a look in you know - those
bastards will stop at nothing. Still, Harrs wasn’t so bothered when he was fourth. He would say: ‘Let them have their fun - Grandma’s on her last legs. They’ll
suspect nothing.’”
“Add to that Charles not being his real dad, and we all know Harry secretly loathes his elder brother, sarcastically describing him as ‘the chosen one’.”
Blazing-squad explained. “The plot to have Wills ‘taken out’ was quite far advanced, before Prince George’s arrival threw a spanner in the works and now this. It’s back to the drawing board for my pal; the bloke’s a real nightmare to live with at the moment.”
Indeed, for Royal Watchers Harry’s recent 30th birthday seemed a moment for reflection, the younger Prince forced to confront the fact that he had made no positive impact on humanity during
his first three decades here on earth. Add to this Kate and Wills’ recent announcement, and there is talk of a ‘perfect psychological storm’. The current ‘Prince Henry of Wales’ is hiding it well
between a cheeky grin and succession of butter-wouldn’t-melt photo ops, but under his chirpy exterior lurks numerous shoulder-chips and a sense of entitlement so massive, worried Royalists are
uncertain how far he will go to fulfil his kingly ambitions.
“The lesson to be learned here is that time is of the essence in Royal circles – Harry needed to get his shit together earlier to finalise the murderous plot.” Former
psychiatric advisor to the Windsors, one Sue Tiktaalik (right), told HDUK. “Ever since his teenage years, the Prince has been plotting against those who lie between him
and what Harry sees as his rightful crown; planning their demise with ‘hunting accidents’, undetectable poisons, or a massive, gory frenzy at his upcoming arranged
marriage that can be blamed on ‘Russia’. But the longer Harry leaves it, the more family members there are to dispose of when the Prince finally puts his malevolent
scheme into practice.”
“I told him, I said: Henry dear boy, if you want to ascend and get the respect of all the peasants with your ‘iron fist’ style of rule, paving the way for what historians will look back on someday as ‘a
reign of blood’, you’d best not dally. Get in there and put the heads of your enemies on spikes so they run across London Bridge at regular intervals.” Mrs Tiktaalik enthused. “But the next thing I                                     know there are all these reports of Harry running around exclusive Las Vegas resorts in the nud, chasing pneumatic blondes who squeal with pleasure while pretending
to evade his grasp. Harry needs to get focussed, that’s what I say. But the Prince doesn’t have it in him to do anything nasty to a baby, however much I tell him to look
to the Bible for inspiration.”
As Home Defence went to press Harry’s petulance and adolescent behaviour showed no sign of ending, with the Prince’s official Toilet Seat Warmer, Marty Lapdog, reportedly shopping his story
around the tabloid press. Lapdog’s inside account will confirm his employer, on hearing of the Duchess of Cambridge’s sophomore impregnation, launched a tsunami of inclement language which
resounded through the palace before causing thousands of pounds of damage trashing his quarters while yelling: “Again?? Are they part rabbit? How much publicity does one couple need, for
fuck’s sake? Now I’ll never fulfil my dream of becoming England’s first polygamous King! When is it going to stop??”
A palace spokesman denied anything had gone wrong, but was forced to concede there had been “a small tantrum”, quickly confirming Harry was “in much better spirits” now, having drowned his
sorrows in a rejuvenating week-long banquet-cum-sex-orgy, all covered by upping tax on the working poor. 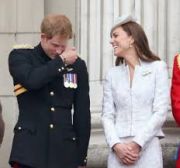 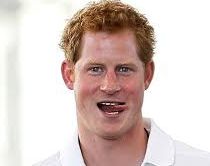