of the right-wing Conservative party, addressed members of the press and his

“I’d like to thank everyone who put their faith in us.” Diddy told the nation, flanked by smirking Chancellor

George Osborne (left) and William ‘Little Billy’ Hague, a very bald man. “In particular, it is only fitting to show

gratitude toward those poor people who voted for me; who I intend to repay the only way I know how – by

making them even poorer!”

As his gorgeous wife, known only as Sam-Cam (right), pouted for the cameras and fielded questions about

whether she had been impregnated by the devil in return for her husband’s success, Mr. Cameron went on:

“Now that this result cannot be changed, I feel it is safe to admit the truth. Whatever pledges we
Conservatives made during our campaign, whatever issues we paid lip service to like the environment or
equality, they pale into insignificance when set against our perennial concerns, just as many of you knew all
along. These priorities comprise big business and the accrual of wealth within the upper echelons of society.
Thank you very much.”
Earlier the Conservative party polled the highest percentage of the national vote against a pisspoor tally from
the incumbents’, taking the greatest proportion of seats nationwide and thereby holding a firm majority in
Parliament. The Tories were subsequently invited to form a government by Her Majesty the Queen who was heard to remark to her aides how “young and fresh” this “new lot” looked.

the streets to hear him speak.

relied on support from the state in the form of tax credits, jobseeker’s allowance, winter fuel subsidies and a

healthy state pension. This will no longer be the case.”

As the applause and whooping died down Diddy went on:

“There is no better time to reinforce the traditional Conservative ethos of tax cuts for the rich and the favouring of corporations over the individual. Although we didn’t admit any such thing up until this point, believing it wasn’t a good idea to tell the truth because that might cost us votes, from tomorrow my government will begin to reverse the mistakes of the
left-wingers. First we shall energetically seek out scapegoats, upon whom we will blame the ills of society, then
we introduce policies that continue to widen the gap between rich and poor.”
At this point Cameron banged his fist on the lectern. “Next we condemn absent fathers, single mothers, asylum
seekers, public sector workers, the unemployed and the BBC. What do you reckon?” Cameron cried out,
prompting screams and cheers from the yummy mummies, Daily Mail readers, ageing film actors and Australian
media barons who had joined the celebrations and now stood before him, enrapt.
The first of these bills is expected to be rushed through parliament tomorrow by the new cabinet and will
facilitate the tightening of anti-union laws as well as seeing Bob Crow publicly put to death as an example.
Shortly thereafter the inheritance tax level will be raised to £50 million and sixty-seven different measures will be drafted by the new Home Secretary, all aimed at alienating the European Union.

rich sponsors who financed their lavish election campaign even richer. The new government intends to

the BBC and NHS. Soon all public organisations and services will be sold off at bargain prices to the new

governments’ mates, while police levels are expected to fall, even as footage of the police in action

increases. Special films will be projected onto communal spaces, including walls and buildings, to trick

the public into believing there are more “bobbies on the beat” than ever.
Later, when an interviewer put it to Mr. Cameron that even a first-year economics
student might conclude his party’s measures will lead to widening inequality
and a concomitant rise in burglary, robbery and murder along with putting
thousands of Britons out of work and undermining the UK’s emergence out of
recession, ‘Diddy’ just shrugged his shoulders and gave a shit-eating grin.
“What can I say? I’m being up-front with the British people. We have some
tough choices to make over the next few years, and the Conservatives won’t
shrink from them. This might mean we break the country in ways it has never
been broken before, ways that may not be detectable for decades, but will be
profoundly felt by the working classes and their children, but so what?” The
new Prime Minister asserted while leading Sam-Cam away from the journalist
in question who was later fired from his job. “We have absolute power for the
next four years and there is nothing you or any other member of the electorate
can do about it. The people had their chance and we won. The last thing I want
to do is listen to the heartfelt pleas of the less well off. I’m evil, and so’s my
wife.”
The new Prime Minister then threw back his head and emitted a deafening gale
of unearthly laughter, causing shivers to run down the spines of everyone
present as all oxygen was sucked from the room. After the noise died down it was observed that Mr. Cameron had now left the building for a dinner date with Ken Clarke. 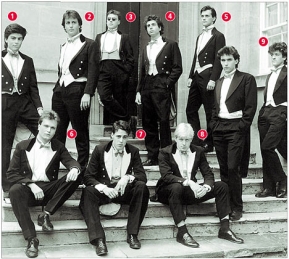 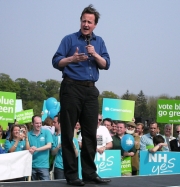