gentlemen’s clubs of Great Britain in 2014, where a growing groundswell of

“What I find most offensive is their refusal to tolerate my intolerance.” Fumed noted Derbyshire bigot Lemmy Ipnas when HDUK met him at the county town hall, a place he chose because the attendees were almost certain to be white. “Not all of them are as outspoken as me, but believe it when I say this nation is home to millions of proud bigots; all nervous and fearful and in need of some outlet to counteract the horror represented by the nameless threats occupying their

“They’re stealing my tax money.” Lemmy (left) went on, lighting a cigar and glowering as a young woman coughed pointedly nearby. “All

those filthy gypsy swine. Why can’t I express myself honestly, either with my mouth or on a computer? Censorship is what it is, pure and

“As a grown man and multiple car owning voter I need someone to stand up for me, whenever I make offensive remarks aimed at those I

don’t like the look of. I also expect the police to be there immediately to protect me from reprisals, not threaten me with arrest if I shout at

‘ethnics’ for having too many kids. That’s the basic human right of every Englishman.”
“And when I use ‘jigaboo’ to describe someone African or black or whatever, I know what I mean, and it’s hardly a
threat to society, just a form of short-hand. Like referring to the man who works in my corner shop and might be
Muslim as ‘exploding Abdul over there’. It’s harmless, utterly harmless.”
Lemmy went on: “That’s why I find it so disgraceful when the PC lobby are upset by hostile Englishmen shouting at
someone for speaking a foreign language in public, or they gang up and delete my Mail Online comments when I refer to
criminals as ‘pikeys’.”
“It’s as if every aspect of my existence is repellent to these namby-pambies.” Ipnas asserted, scrunching up his
fists and turning purple. “Why do they waste time complaining about someone like me who simply flags up relevant
aspects of British lives today? I’m simply relating the day-to-day reality of the prejudiced. Don’t block me from your
site. Bloody behavioural Nazis.”
Mr Ipnas then left with the avowed intent of finding the nearest Mosque and loudly insulting Allah while goose-stepping among the worshippers, a display he characterised as “in defence of my civil liberties”.

On the other side of this idiotic argument are civilized countries, including the UK, who remain proud of their progress toward equal

rights, increased integration, universal suffrage and the acceptance of gay marriage. These nations have all been cited by progressive

thinkers as evidence that the human race is growing more inclusive, at least in the West.

feel left behind by these developments, becoming frightened or insecure when confronted with the realities of a multicultural, 21st

century nation, where women with exotic surnames can present the news, run shops stocked with cuisine from other lands or even

play for their local sports team. These reactionaries have been at loggerheads with an establishment that declares we’ve come too

far to allow cretins to derogate anyone who might be superficially different, a situation that infuriates pricks like Peter Hitchens who

see it as some kind of threat to their freedom of speech.
The most famous example of this is the recent court case of ‘bus-riding anti-semite’ and viral sensation, 27-year old Fenella Dogwinkle. This young woman was filmed by a fellow passenger screaming at an Orthodox Jewish family sitting together on a North London Routemaster. After Miss Dogwinkle appeared on Twitter she was subsequently arrested, polarising the ‘pro’ and ‘anti’ factions of the ‘should bigots be allowed to express their views?’ debate. Earlier this month HDUK caught up with

“If they find me guilty I’m gonna plead to the European Court - Strasbourg, that’s where I’ll go.” Miss Dogwinkle

nodded, giving the fish-eye to fascinated bystanders outside court. “I admit that it happened, course I do, they've got

me bag to rights. That’s definitely me in the footage screaming ‘fucking yid!’ in the face of a small boy with ringlets,

but so what? He deserved it.”

“Them Jews offended me, with their self-possession, non-plussed body language

and strange hats.” Fenella went on. “That’s not how English people ought to
behave. My lawyer says the coppers breached my human rights with their prosecution, so I’m gonna lodge an appeal with the Belgian
Judges. Then maybe folks like me can see about getting justice.”
“If they get away with sending me down for a bit of anti-Jew banter, what comes next?” Fenella (right) asked, wide-eyed. “I’ll have to be
careful what I said in front of roly-poly fat fucks, homo bumboys, spastics… even gingers? I really don’t like gingers.”
“I’m fighting the good fight for every right-thinking Brit out there.” Fenella declared. “One day they’ll make a movie about me.”

“equal and inalienable rights of all members of the human family” in international law. This agreement, brought in after the Second

World War, focusses on freedom of thought and expression, along with the right of every individual to speak as they wish without

being subject to state control. These latter elements have been seized upon by many self-confessed racists, including former UKIP

“If I need to use the tried and tested phraseology of my forefathers; rich, evocative terms

like ‘shirtlifter’, parlour slut, nip, nig-nog, or hairy-legged Lesbian, why shouldn’t I?” Bloom

opined this week before a shocked Question Time audience. “Our ancestors were great
men; part of this country’s rich heritage and in many ways their era was better. They didn’t have to suffer do-gooders sitting
on their backs, squealing each time somebody said something a bit inflammatory about boat people or junglebunnies.”
“Those who would lecture me for supposed racialism are hypocrites.” Bloom (right) concluded, shouting over the boos before
reclining smugly. “Why shouldn’t men like me be permitted to discriminate against the most vulnerable in society, with a
view to alienating them entirely? That’s what this government’s been doing with their policies for the past four years.” 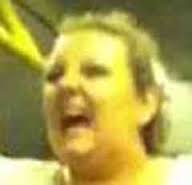 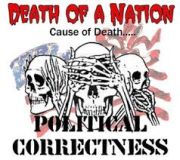 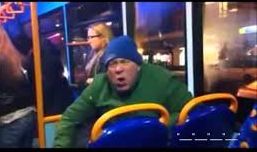 A liberated bigot expresses himself fulsomely in a public space.
Another bigot.