The North of England where, at the close of Autumn 2010, men of a

certain age across Yorkshire and Cumbria are looking on the bright

suffer most as the chill wind of benefits annihilation sweeps across the British Isles.

“This is just like when I were a lad,” Sprague Dawley (left), a middle-aged man in a flat cap clutching a pint of

mild told HDUK when we met him in Wakefield working men’s club. “Blokes rising up and taking to the streets,

strikes everywhere, piles of rotting shit; a government in power after a dodgy pact with the Liberals. Ay, that was

me back then, a young man with the world at his feet. I’d go out and deliver bread at the crack of dawn each

morning, then go down t’pub and convince some local girl to come back to my lodgings.”

Mr. Dawley then reached down to stroke his undernourished whippet, Clive, while nodding to himself. “Great

The original winter of discontent, which many of those who were young at

the time remember fondly as the backdrop to their initial explosion of
freedom and virility, covered the winter of 1978 and on into 1979. This was a time when
ambulance workers, miners, dustmen and gravediggers refused to work for long periods due to
what they maintained were unfair freezes on pay. Soon emergency services were no longer
available and there wasn’t enough electricity to provide light or heat. Meanwhile grieving families
had to improvise; bundling up deceased loved ones in garden sacks and taking them down to
the beach for a homemade burial at sea.
Of course, the context of that first winter of discontent was different. Back then the political
culprits consisted of a Labour government who had no bloody idea what they were doing, presiding over a collapse in sterling whilst placing sanctions on companies who breached archaic wage policies and cutting taxes for big business. Indeed, Labour seemed to lurch from one crisis to another, like a bunch of distracted gibbons who had somehow been given the keys to Downing Street and

allowed to run the country.

historical parallels when they were put to him.

“I think it is far too early to be talking of a ‘Second Winter of Discontent’, that’s just ignorant

scaremongering. British citizens who live in the real world are unlikely to claim there is ‘mounting

chaos’ as you allege.” Mr. Cameron told an outside broadcast unit while, in the background,

servants. “My coalition has a number of innovative solutions to this issue and we will ensure

these extremist troublemakers don’t spoil life for all the nice

Conservative voters out there.”
“First of all, we’re going to look into banning the unions altogether, bring in new laws to prevent
large gatherings, and put anyone who protests in prison.” The P.M. mused as his wife handed over
their new baby Florence and Cameron bounced the adorable moppet in his arms to distract
newsmen from the content of his statement. “It may mean having to build more prisons to take
millions of additional inmates, but with the help of the ever-efficient and inherently superior private
sector, I believe we can remove the need for government to fulfil the function of government in the
end. Thank you very much.”
The Prime Minister then gave a friendly wave and was escorted away before disgruntled groups of
the newly-unemployed could get through the reinforced police cordons and ‘at him’.
A study commissioned by Home Defence confirms that the vast majority of those who were within the 16-25 demographic during that first winter of discontent are “looking forward” to the second one because they find it “reassuring”. Indeed, history repeating itself in this way will give Britons plenty of opportunities to reminisce, often at great length to bored grandchildren or passers-by.

However, this time the disruption is likely to take a different form, as walkouts by train and tube staff

have access to a private jet. Meanwhile the absence of NHS workers could mean all surgical

procedures have to be postponed until the summer of 2011, while industrial action by schoolteachers

across the country unable to occupy their foaming offspring during weekdays, times when said tots

will soon be unexpectedly lurking in the family home.
Ultimately though, it is the ironically named ‘working classes’ who will be most affected by George Osborne’s fiscal eugenics, initiatives that have been likened to a pogrom or ‘social cleansing by stealth’ by such heroes of the common man as Tony Benn, peoples’ princess Cheryl Cole and Boris Johnson.
“What we will see this coming winter is the emergence of an underclass who are less well off,
in real terms, than their Victorian ancestors, many of whom lived in privies and subsisted on
gruel or stolen parsnips.” Social anthropologist Fritz McSporran told HDUK. “As poor people
have their housing and child benefit removed, find themselves ousted from council homes or
shut out of the food sector due to rising prices and the impossibility of finding work, we expect
to see civil uprisings for as long as their body strength holds out. But eventually the
working classes will give up and then we shall step in and forcibly relocate them to bed and
breakfasts in Hastings or Skegness, whereupon we expect them to quietly curl up and die.”
“But if they are fortunate,” McSporran went on, “The nouveau riche could help out as childless actresses and reality TV stars buy any spare babies off the proles. At the same time, those in the lower middle classes who have been lucky enough to retain employment,

often doing the jobs of two or three people for less than they were once paid, are likely to go on

blaming immigrants for their present situation. Finally, the top income percentile will raise their

glasses to a lack of oiks and chavs, all of whom have been relocated far away from their

neighbourhoods, and many of whom will no longer be alive.”

“On the plus side,” Fritz concluded, “[pop band] The Flying Pickets

[left] have just reformed and will be playing their biggest hit, ‘Only

You’, at the reunion shows. What a great song that is.”
Following the end of this second winter of discontent around next April, it is expected all dissent,
strikes and street protests will fizzle out, with three-quarters of the British public once more invoking
that much talked of ‘stiff upper lip’ and meekly accepting a repeated shafting by their rulers on a
continual basis. 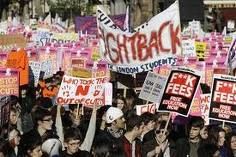 Britain in the late seventies.
Diddy and SamCam seduce the media with cuteness.
Police reason with demonstrators.
1