The town of Penistone, South Yorkshire, where local boy and salad-dodging Secretary of State

for Communities and Local Government, Eric Pickles (right), has chosen to base his

depressed area, teaching unfortunate whites how to prepare and facilitate the authentic Indian

Home Defence travelled to this land known only as ‘the north’ to check out Pickles’ solution to
the “burgeoning lack of talent” in our curry industry. This sector employs 70,000 people in 9,000 restaurants around
Britain, and is said to be worth £3.2 billion in spite of recent crises, with Indian restaurants suffering from a Home
Office ruling that only the top 5% of skilled chefs can migrate to the UK.

On arrival at the multi-million pound complex, which is basically a converted

warehouse on the outskirts of town with a mural of Pickles’ fat head decorating its roof,

we were greeted by tour guide and Public Relations man, Dickson Mumpsimus (left).

tikka masala.” Mr. Mumpsimus advised, leading us into an area of vats, ovens, and exotic smells. “Here the lads get a bit of practical

experience.” He continued, watching teenagers in shell suits try to make poppadums. “And through here is Mr. Pickles’ favourite

We entered a glistening room with a dining table as its centrepiece, ringed by several chairs and a bucket. “Eric drops by whenever

he wants to take a more ‘mouth on’ approach to our students’ progress.” The guide continued. “In fact, whenever he’s in Penistone, Pickles will spend most of his time here, judging the trainees’ Aloo Gobi or Murgh Dansak and giving his opinion whether their food is up to snuff. Sometimes Eric disappears into that side room for days.” Dickson went on, gesturing at a nearby door. “…with an instruction not to disturb him
under any circumstances, aside from regular samples on the hour, every hour. Sometimes we forget all about Eric, and only
remember he’s around from the eructations, blocked toilets, and because we quickly run out of ingredients.”
Teaching upwardly-mobile chavs and laid off white collar types how to rustle up a Keema Naan became Pickles’ responsibility
when the Prime Minister, ‘Diddy’ David Cameron (right), told parliament: “Out of all my cabinet Eric is the best at knowing his
way round an Onion Bhaji. I mean, just look at him.”
Government attempts to turn curry houses into bastions of ‘white power’ are just one part of a wider coalition policy set to overturn
the victories of multiculturalism and cut immigration to the bone. Since coming to power, the Conservatives have made it their crusade to reduce the number of specialised cooks arriving from far off lands like Bangladesh and Pakistan that are dominated by ‘dusky peoples’. Those in power refuse to be swayed by the argument that these migrants are highly-skilled taxpayers with jobs and family members waiting for them, coming over to give drunk Brits the best possible Chicken Korma. It

seems that, for all their positive attributes, these wannabe migrants have the misfortune to be born outside our national boundaries,

and they aren’t white. With key public figures, from historian David Starkey to unrepentant bigot Diane Abbott, queuing up to

oppress our much-victimized Caucasian majority, Pickles is seen as the man to take action and restore Britain’s balance.

Many of those who ‘don’t get on with spicy food’ are in favour of Pickles’ multi-million pound initiative, but Home Defence has heard

a number of dissenting voices across the country, with Wirral-based curry blogger Pharoah Weiner particularly vociferous.

“I’m not sure Pickles cares about the ethnic make-up at restaurants, or the difficulties managers have bringing cooks over.”

Mr. Weiner told us. “No, I think Eric just jumped at the role when he heard it would involve free food. These days Pickles flies out of

London once a week to ‘oversee’ his cookery school at taxpayer expense. I’m not surprised Pickles has privately described this

set-up as his dream job. It combines his two favourite things; foreign food and border control.”
“I mean, I’m sure his chef boys are alright, I wouldn’t mind trying the fruits of their labour at some point myself.” Pharaoah
concluded. “But with nationwide austerity measures in place, surely it makes sense to let qualified chefs into the country
rather than spend a fortune on this scheme?”
HDUK put this to Pickles when he turned up at the end of our tour, riding his trademark ‘belliwheel’. The 59-year old,
self-confessed flag enthusiast hit back at his critics, telling us Middle England was happy to see its taxes filtered into his
curry school, providing the initiative led to a reduction in darkies running local businesses. Indeed, when it comes to his
College of Fine Indian Cuisine, Pickles confirms no expense will be spared.
“We need to placate the shires, not to mention The Daily Mail.” The roly-poly lardbucket chortled. “Our core voters aren’t impressed by floods of new arrivals, however much these new cooks might increase standards at the local Tandoori. My vision is for every Indian restaurant in England to be staffed by slouching, pimply white

men in their early twenties, staff who are otherwise unemployable and can communicate only in a series of grunts.”

“Wouldn’t it be great?” The morbidly obese Member of Parliament mused. “To have Brick Lane run by under-qualified school

leavers and struggling Englishmen by 2015, with no Bangladeshis in sight? With the right training and a shit-pile of public

funding, we can make this dream a reality. Now, if you’ll excuse me, I need to get hold of some Pilau Rice. That biryani’s

The virtually-immobile porker then trundled off to fill his boots. But as HDUK went to press, it was proving difficult to gauge the

first batch of graduates from his college. The main problem came in assessing the grades for their graduation projects since,

after Pickles got hold of the food, all he left behind was dirty plates, soiled towels, and a pile of empty chocolate wrappers. 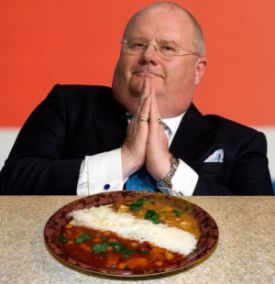 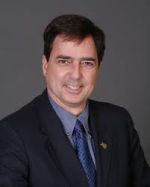 An old-school curry chef prepares 'the usual' for Mr. Pickles.
1