explain himself to the media and a confused public, all gathered outside his house after

past those ‘trust’ and ‘loathing’ issues that proved a big deal with so many.” Cameron went on as the friendly cartoons either side of

him grinned and waved their agreement. “We've identified the two main sources of this problem; Liberal Democrats, and anyone in

the Conservative Party who isn’t me. That’s why I’ve appointed Miss Rabbit here as my new deputy Prime Minister, while Peppa has

received the keys to Georgie O’s old place. Number eleven, just over there.”

“Everyone with children knows that Peppa is a pig of the people. She brings all races, nations and species together with her positive

message and friendly smile.” Cameron went on, voice rising emotionally. “This pig is exactly what our country needs in times of austerity, poverty, starvation and suicide by benefit change. Let no one allege I could be
anti-women, not ever again. Even if these ladies aren’t human, together Peppa, the rabbit and
me, will turn this country around. Thank you, no questions.”
Along with the famous bunny and her sidekick, other cast members from the popular show have been
‘headhunted’ by Cameron, his inner circle now including Zoe Zebra - who takes over from a beleaguered
Iain Duncan Smith at the Department of Work and Pensions - and Tiddles the Tortoise, who is said to
be a shoo-in for Secretary of State for Education, replacing the much-reviled Michael Gove.

Meanwhile Theresa May has seen her leadership ambitions destroyed in an instant, having been relieved of her duties as Home

to come in this morning and find the new incumbent at Business, Innovation and Skills, Simon Squirrel, studying briefs

while secreting nuts around the room.
“I detect the dread hand of Lynton Crosby in all this.” Parliamentary blogger Ephremia Backslide told Home Defence via Twitter, blaming
Cameron’s political strategist and self-styled ‘master of the dark arts’. “Everyone in Westminster knows Lynton diagnosed George
Osborne as Diddy Dave’s biggest problem. I initially thought the reshuffle was just to get rid of him, but Crosby must have decided this
was the perfect opportunity to get rid of all that dead wood holding them back. Which turned out to be pretty much everyone.”
“It’s a clever move, if you ask me.” Miss Backslide (right) continued. “Not only does the government see a positive ‘bacon bounce’ in the
polls, but the threat from Ed Milliband and Nigel ‘not a racist’ Farage has now been nullified. After all, you can’t slag off these much-loved
characters in public. The under eights simply won’t stand for it.”

government.” Ephremia confirmed. “But a great deal of thought has gone into these appointments. Peppa, for example, created

a multi-million pound empire from scratch; one that incorporates branded jewellery, bed linens and bathroom products,

amongst other tat. There’s also the ‘Peppa Pig World’ theme park at Paultons, Hampshire which, by all accounts, is utterly

helicopter pilot, firefighter, ice cream sales-rabbit and car crusher, and all without even going to Eton, what with being a rabbit

and all. Her background should help Miss Rabbit connect with the little people, even if

she does display an unnerving tendency to pop out babies with little or no warning.”
Few now spare a thought for those men left on the scrapheap of history, including Nick Clegg, Francis Maude and Danny Alexander,
while Iain Duncan Smith is due to sign on later today and discover if he’s entitled to Jobseekers Allowance, or will, instead, be forced
to work at Poundland for free. Meanwhile, some see the reshuffle as the last gasp of a desperate, borderline mentally ill P.M.,
something that Young Conservative and Lynton Crosby’s intern, Simeon Blurtneet, was quick to deny.

“Something had to be done about the perception of the Tories. The public sees them as dishonest, sleazy, wildly inept and

essentially unsuitable for office.” Mr Blurtneet told us. “And with Conservative MPs defecting to UKIP every day, noisy backbenchers

challenging Cameron and Nadine Dorries’ return from the dead, it was time to wrestle back the initiative.”

“Diddy Dave prioritises loyalty above all else.” Simeon went on. “Say what you like about putting two-dimensional farm animals in

government, they’re unlikely to start a leadership challenge or betray him over Europe.”
“Cameron and Crosby also have an eye on voters of the future.” Blutneet asserted. “Peppa’s extended family plays well in the
three-to-seven demographic, and her fans can only get older. In a decade or two they’ll be Conservative voters, and we’re already
seeing similarly positive results from this reboot.”
Blurtneet concludes: “Kids won’t let their parents vote for anyone but ‘The Peppa Party’ come election day, and bleeding heart lefties
can’t go against their offspring. They won’t lie to kiddies then head out to vote, not without an attack of conscience. We believe mums
and dads will back whatever policies Robby Rabbit, Chloe Pig, Mrs Cat and the others endorse, if only to keep the ankle-biters happy.”

Indeed, with early polls showing support for the governing ‘Pig-alition’ jumping to 100% among harassed parents everywhere, Cameron and

company expect to gain an overall majority at the general election, which will lead to a record number of non-existent, animated creatures

representing the interests of British constituents, both locally and in the European Parliament, by 2015.

However, reports that London's Mayor, Boris Johnson, was replaced with a cartoon version of himself several years ago, but that nobody

actually noticed until now, could not be confirmed as HDUK went to press. 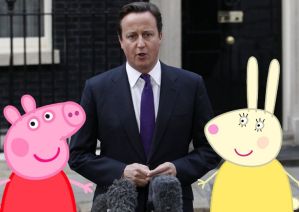 Gove and his replacement at the Department for Education.
1