The seat of government in Westminster where the traditional

climax to Parliament’s Autumn session has today been hit by

scandal and controversy prior to MPs’ month-long Christmas

break. Every December the House of Commons’ six hundred
members set aside their differences to put on what some commentators have
called “the finest production of the gospel story in the United Kingdom!” However,
2009’s event has proved very different, with the legacy of a year’s professional
backbiting and enmity between the major parties taking a severe toll.
“Rehearsals didn’t go all that well, but we were hoping everyone would pull together
on the big day, you know, for the kiddies.” Independent MP and stage manager
Devilled Jamoke told Home Defence. “But there were grumblings beforehand and
I think some of the performers must have had a liquid lunch because backstage it stank of gin.”

“The trouble started when the Three Kings came onstage.” The Member of Parliament for John West

went on. “They were all Cameroonies [members of ‘Diddy’ David Cameron’s Conservative Party] while

David Milliband played the Baby Jesus for the third year running. Well, the Kings refused to defer to him.

The first one, who happened to be played by George Osborne, started muttering how he “wasn’t bowing

down to that jumped-up little twat” and complained; “why does he always get to be Jesus?”
“Well, that riled Milliband right up. Next thing you know he jumps out of his crib, knocks off Osborne’s crown
and challenges him to; 'get swaddled for three hours at a time and see how easy it is!' Then, while the
invited audience gasped in horror, Nick Clegg tried to intercede, telling them both they were “ruining the spirit
of Christmas”. George Osborne [right] didn’t seem to care. Instead he stormed off, yelling something about
'Hillary Clinton' and how 'Milliband’s not getting any of my fucking Myrrh.' The evening didn’t get any better
after that.”

during the Great War for a bit of a kickabout. For the better part of a century now, Members of Parliament

have set aside their political affiliations every year to recreate Mary’s donkey ride, the Virgin birth and the

Three Wise Men arriving at some dung-filled stables behind the back of an inn. As well as reminding

Westminster’s big hitters of the true meaning of Christmas, the performance gives specially-invited

representatives. Unfortunately, this year's occasion didn’t quite go like that.
“I heard all sorts of moaning and rumours from the start.” A glum Vince Cable, who had been due to descend
from heaven on a wire dressed as the Archangel, told Reuters. “The roles are supposed to be assigned at
random, but Gordon Brown and Harriet Harman installed themselves as Mary and Joseph again and that
appalled the Conservatives.” The Lib Dem went on. “It gets my goat, they way they behave. Cameron and
his boys think the next election is all sewn up already, and they’ve started acting like they own the place.
When the Tories found out Labour were determined to keep all the juiciest parts for themselves they
stormed off muttering ‘left-wing conspiracy’ and how ‘things will be very different when we’re in charge’.”

with some of the egos involved, particularly the government’s Business Czar, Alan Sugar. The star of TV’s

'The Apprentice' reportedly ‘bagsied’ the key role of God, then interjected during read-throughs to tell

nervous cast members they were “shite” and “ought to be shot in the head”.

With his party’s star presence frustratingly restricted, Prime Minister in waiting David
Cameron chose to parachute in “some much-needed glamour”, by calling up blonde Tory MP for somewhere up
North she’s never visited, Bombazine Spunkmeyer (right). Spunkmeyer was asked to come in and play the
Innkeeper’s wife, her background in Notting Hill’s leading Amateur Dramatics group expected to stand her in
good stead. But come the day and Bombazine was unable to get her lines across, tears welling in her eyes as the

nativity descended into farce around her.

“It was horrible.” Ms. Spunkmeyer told HDUK. “Right from the start Jacqui Smith was a complete bully. She

said my roots were showing and that the wife of an innkeeper would never wear shoes like mine. Then the

insults started flying when we were supposed to be ‘on-script’. I looked out at the audience and saw my fellow

politicians’ children and grandchildren being shocked and appalled by our pettiness. Little girls were hiding in

their nannies’ skirts to escape the profanities Mr. Sugar was yelling and I had to ask myself; what have we

come to? Thankfully the Speaker called security before things got really nasty. I truly believe someone would

have punched that Alan Johnson in the face if he hadn’t.”

The evening ended with the audience being ushered out by stewards while
shoving and recriminations continued on-stage, scuffles that only ceased after every MP had been
escorted from the house, leaving only Ann Widdecombe who was playing a shepherd. The Honorary
Member for Maidstone and Weald then lost it completely, using her crook to smash up the manger
in a fit of religious pique. The appalling violence went on until a veterinarian who happened to be in
attendance was prevailed upon to shoot her with a tranquilliser dart. Ann’s unconscious body was
then carried from the building while unsuspecting schoolchildren happily sang Christmas Carols in
the distance.
Prior to a formal investigation, the fate of the lower chamber’s traditional Nativity Play, and indeed
the whole concept of festive celebrations for our elected representatives, is now in serious doubt.
Ed Balls mother recently voiced the discontent of much of the public when she
told The Sun: “If they can’t play nicely, they shouldn’t be allowed to play at all.”
NATIONAL NEWS
with Al Likilla
Home Defence UK
A Symptom of a Greater Malaise
Annual House of Commons
Nativity Play Descends Into Accusations, In-Fighting
14/12/09
ALL NATIONAL NEWS:
1 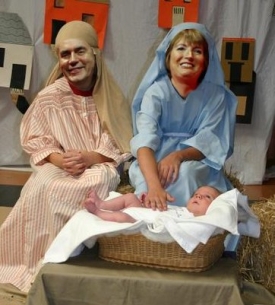 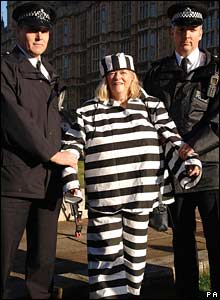 The face of God.
The 1974 production was less controversial.
The lower house - where the worst of it happened.
A recovering Ann Widdecombe is paraded for the cameras as a stark warning to all.
Extras tend to Mr. Milliband.
1