HOBBIES
with Clint Panzerdivision
Home Defence UK
A Symptom of a Greater Malaise
LOAD ""
Video Gaming For The Obsessive
ALL HOBBIES:

Here's a handy tip, gamers – if you live in a studio flat* with a

no longer just an irritation but genuine physical evidence of a

malevolent god who hates you then why not try replacing your

screen with a pair of curtains?  I know, I know, it seems ridiculously extravagant but hey, you're worth it.

For my reflection free gaming enjoyment this week I've been racking up a quite phenomenal body count in Wet,

a delightful slice of stylised ultra-violence from Bethesda Softworks.  Bethesda are, of course, best known for

their magnificent free-roaming RPG epics Oblivion and Fallout 3, and fans should note that this is very much not

in the same vein, but then it doesn't set out to be.  Instead, it seems, they've deliberately gone out of their way

Wet's heroine, Rubi Malone, is a cartoonishly implausible gun-for-hire whose missions inevitably result in her having to kill as many people as possible in an impressively acrobatic way.  There's a storyline that occasionally punctuates the two handed slow motion headshot action, and they've taken the trouble to bring in real actors to do the voices (Eliza Dushku, Malcolm McDowell, Alan Cumming) but it's mainly just a hook for more killing.
Visually, the game – ahem – "borrows" from Hollywood like a kleptomaniacal magpie.  The most obvious
influence is Tarantino in his seventies fetishist hat, but there's considerable debt due to a Mr Woo, and I
spotted shades of Point Break and The Matrix in two of the larger set pieces.  Why not have some fun
drawing your own action movie parallels?  Also worth mentioning are the 'Rage Mode' sequences, in
which Rubi goes all Frank Miller and dishes out extra violence in modish red and monochrome.
The soundtrack's decent too – a pumping selection of "seventies inspired" rock originals that motor
along at the same breakneck pace as the rest of the game, and can be placed (and are genuinely worth playing) independently.
Overall, Wet's unlikely to top anyone's Game of the Year list – it's too short (completion time under a week, or a couple of days serious playing) and ultimately too generic, but as a solid example of what the genre can do it's pretty much faultless.
Well done chaps.  Now make Elder Scrolls V. 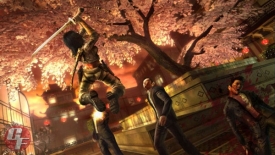