Home Defence UK
A Symptom of a Greater Malaise
HOW I SPEND MY DAYS
with The Reverend Harry Figgis
ALL HOBBIES:
What Would Jesus Do?
02/12/11

Even though next year heralds predictions of poverty, despair and abject misery far worse than

anything Nostradamus could think up or Dante might describe, I still wish a very seasonal “Good

Morrow” to those worshipful souls who read this tripe. As the time of our Lord’s Birthday

approaches, despite being locked in a hopeless, debt-ridden future with little respite, we are, as

ever, busy moralizing over the conduct of others. Be it idiot Clarckson’s union rants, Blatter’s

inappropriate attitudes toward women and “brown people”, or the whimsical, bigoted musings of a
lone nut on a tram, it seems everyone has an opinion, usually extreme or surreal and at odds with the received wisdom.

via social networking sites, the right to reply is about as useful as urinating through one’s own letterbox. Yet every day rants and

anti-rants continue to inform public opinion as quasi-truth, based on the ramblings of a minority of souls with too much time on their

hands. As a protester at Paternoster Square politely pointed out, what would Jesus do?

Much media currency has been gained through this campsite on Saint Paul’s steps, even

church. The original intention to take over the financial district was thwarted, so the church
grounds proved a nearby, if somewhat random, alternative. But this occupation, random or otherwise, opened a schism in the
ranks of the Church of England by inferring the conduct of 'Our Savior' (not Boris Johnson - Jesus) back onto the protesters.
Suggestions of a church prepared to sanction the use of violence to evict its newest, but obviously unwelcome, parishioners, was
deemed a direct contravention of Christian values by the then Canon Giles Fraser. Christ only lobbed out the moneychangers (not
the happy campers) from his Father’s house. Canon Fraser politely took the wind out of the Police’s sails by asking them to vacate his steps and follow a more Christian

Justification for Christ, and no doubt Canon Fraser, acting as unofficial doorman to the church is written in the King James Bible, Exodus 22.25,

and Leviticus 25.36 and 25.37, which some wish to combine with the occupy creed to tackle social and economic injustice: “If thou lend money

to any of my people that is poor by thee, thou shalt not be to him a usurer, neither shalt thou lay upon him usury.”

Usury, a forgotten description for profiteering from the labour of others, seems all too quaint now. It's no longer relevant to the accepted notions

of a world hell-bent on Capitalism. Even the Church appears out of touch with its original meaning. Historically, Ecumenical councils regularly

pondered the complications of usury. In 325 the council of Nicaea “forbade the church” to engage with it, and by 1311 usury was a heresy. Even

Thomas Aquinas came up with the novel notion of usury as a mortal sin, adding the caveat “investment is ok” provided the lender was prepared

to share the risk as well as the profit (a moot point, with banks handing over vast sums of money to European sovereign states).
Today the ill effects of usury can be felt everywhere, with wealth for the few and debt slavery for the many. Look at the average
earning prospects for future generations of Greeks or other members of the GIIP currently forced to pay. Usury is a part of the
fabric of our lives, if not the foundation of them. Whether disguised as fickle banking instruments, designed to sell debt for profit,
or linked to the sinful exploitation of interest on a payday loan, usury nowadays still cannot be defined as anything other than
excessive profit (and therefore greed) without the labour.
So where did we go so wrong?

The minority who control debt are frightened by the prospect that the majority who service it might rebel. Yet the secrecy of the banking

economic ladder. We have been encouraged to accept debt as a way of life, a means to have everything we want now and pay later. In

other words, we help the super-rich stay super-rich by consuming too much ourselves; all this over-indulgence, conspicuous consumption,

lifestyles we can ill afford. We blame the rich for our failings and the financial state we are in, but it is our collective greed that's as much

at fault.
Saint Mervin of BoE has countered the popular Nostradamus predictions of doom and gloom with advice to the banking sector; get
your house in order and save. The problem is, by suggesting banks hoard money to avoid another credit crunch, they starve
businesses of credit and the economy bombs even further. While the 1% continue to possess an income public sector
protect-pensions employees can only dream about, we complain of a government refusing to curtail financial sector greed. We
stand by as the police arm themselves with rubber bullets to take on the country’s youth, only rousing to collective dissent when
Clarckson plays the arse again. It is no wonder Cameron’s recent comments seem comic, about how we should protest standing
up, when in reality most of us face a penitent future, down on our knees thanks to Capitalism’s failure as well as our own. While
George Osborne’s economics continue to do more harm than good, the majority stand by as silent witnesses. Maybe Saint
Mervin’s comments of accountability should be extended to one and all.

As a footnote, it is ironic that Michael Gove intends to send out copies of the King James Bible to every school in

England with a new introduction.

Michael, perhaps the forward could read as follows:

What would Jesus do?

He would probably pray for a fucking miracle, just like the rest of us. 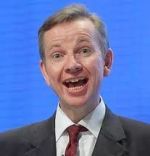 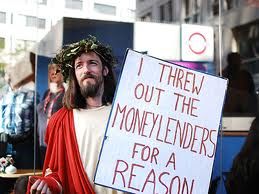