Welcome Pop Pickers, to the HDUK charts. As our country teeters on the brink of moral and

fiscal bankruptcy, greedy traders fix the price of everything from bank rates to oil and gas, as

the nation’s Halloween mascot, what’s going up the topical charts, and what’s sliding down,

here at the end of 2012?
A popular new entry, climbing the chart, sees the Oxford English Dictionary adding ‘Omnishambles’ to its musical lexicon, expecting to jump in at number six any

And just outside the top thirty, the BBC no longer enjoying a position of moral authority, with its fresh remix of Edith Piaf’s ‘No

At twenty-two, TOWIE’s Amy Childs thrusts her version of a vagazled ‘boutique’ romper suit on an unsuspecting fashion world to

accompany her beauty range with Paul Gadd’s ‘Hello, Hello, I’m Back Again’.
But despite these worthy contenders, our newfound collective obsession with outing a paedo at every opportunity is racing up the charts, even spreading as far as Australia. In at twenty; it’s ‘Two Little Boys’ by the Melbourne Catholic Boys’ Choir.
New arrivals come between fifteen and eleven, with future suspects for child molestation The Scoutmasters, swiftly followed by the
Lollypop Ladies.
Santa holds at nine, but could see a slide, considering his penchant for climbing into the bedrooms of children in the middle of the
night. He shares a chart position with the slightest whiff of inappropriate behavior resulting in arrest (unless dead), followed by
‘claims for compensation based on accusation’.
And are eight department stores wondering if a claim is on the way, thanks to an all-but-forgotten 1970s grotto?
At seven, when did we get so selective about child abuse? With the proposed 2013 benefit cuts buggering up the lives of more children than all these Saville revelations ever could?
Let’s look on the bright side. At six; Tory rhetoric shares the charts with Clegg playing ‘Patrick’ to Cameron’s ‘Sponge Bob’ as Boggis, Bunce and Bean provide the backing section. Hunt on Health now, with GPs raking in millions that should be going to support the NHS. Gove’s there with Education by rote while selling off playing fields, and IDS has the bastards claiming unemployment benefit responsible for the mess we’re in today. As this country slowly slips down the pan, the usual suspects continue to sing their same old bollocks. No change here for the foreseeable future.
Still, it’s nearly Christmas, so let’s leave the politics of hate aside for once and, in best festive TOTP fashion, look at the top five chart placings for 2012 (cue the ‘Whole Lotta Love’ music).

Coming in at number 5 is Emma Harrison with ‘I Will Survive’!

Diva Ems’ October Sunday Times article was swiftly followed by an appearance on Channel 4 News; a performance to behold. Apart from

repeatedly claiming the “figures” detailing those souls helped by A4E were wrong, while providing no evidence to back her claim, she

pulled a trump card in true operatic fashion by playing her victim card. Poor old Ems looked and sounded quite irrational, bordering on a

meltdown, going on to say she was bullied. This sentiment was no doubt shared by those unemployed she coerced to attend her ‘Back to Work’ program. Perhaps Ems thought she could somehow redeem herself with the taxpayers by going for the populist vote.
Unfortunately that turned out to be as appropriate as a jaunt round the BBC car park in Jimmy Savile’s motorhome. Ems, the
professional entrepreneur and businesswoman, managed to endear herself to the nation by acting akin to the spoilt brat in ‘Just
William’, claiming: “I’ll scweam and scweam ‘till I’m sick!” It is rumored that Diva Ems will soon be doing a duet with Adele to
follow the latter’s recent chart single ‘Skyfall’. Initial word on the grapevine claims “it’s awful”.
Da da da da dum de dum de dum de dum de dum de dum de dum….

In at number 4, there’s a joint entry for Chas and Dave’s ‘Rabbit Rabbit’ with Rebbeka Brooks’ ‘The Crying Game’.

Dave’s texts, something to do with him and a bloke called Charlie sharing rides on an unpredictable chestnut mare, are the

inspiration for this single. I too cried twice, only with laughter. Apart from the obvious damage limitation, perhaps Dave thinks all this

malarkey somehow endears him to the plebian masses, making him appear as just another ordinary working bloke; a peoples’

Prime Minister. More textual revelations are bound to follow, and just you wait for this young filly’s court case – that should leave

And new in at number 2, it’s Nadine Dorries with ‘The Lion Sleeps Tonight’!

Plucky Nads, the defrocked Tory, when not caught with testicles in her mouth will be using IACGOOH as a platform to re-issue her

single on abortion. Sadly, the worlds’ press seem to have missed Nads’ point, more interested in her lying in a crate of cockroaches

(although Nadine actually denies this ever happened, suggesting 70% was fiction and, according to her blog, she was elsewhere).

asparagus? Just say NO Nads - just say NO…! A duet with Hugo seems unlikely, although Nads’ self-serving tendency to prostitute

herself for media attention doesn’t rule this out. Just say NO Hugo - just say NO….!
Da da da da dum de dum de dum de dum de dum de dum de dum (followed by a maniacal screaming cat guitar noise...).
And finally, the moment you’ve all been waiting for, the HDUK number one TOTP chart winner for 2012…
‘It’s Fucking Christmaaaaaaaas’ by John Lewis, Sainsburys, Tescos, M&S, Morrisons, Asda, and anyone else cashing in on the
spirit of sweet baby Jesus.
Forget Noddy Holder and the carbon footprint of bright red cola trucks appearing over the festive horizon in a neverending
train, delivering their satanic load of toxic brown tooth decay, Christmas adverts have arrived as the new number one.

Yes, you guessed it, our self-appointed retailers of style have decided cultural sentimentality is the way to flog us more shit we don’t

need. Now everyone can marvel at Holly Willoughby’s mission to get the nations’ women dressed down, like Eastern European

hookers on Mufti day. Wonder, as Holly and Fern’s very.co.uk ads accost Santa like a Jimmy Savile revenge attack. And let’s not

forget the patronizing Morrisons and Asda commercials; cliches presumably dreamt up by a weird sect of 1950s Mad Men. “Behind

every Christmas there’s a Mum”, a sad sexist rehash of; “behind every successful man there’s a woman”. I, for one, can’t wait for

future Christmas adverts to declare; ‘inside every straight man there’s a gay guy trying to get out’. How many personal grooming

products could that sell?
M&S are still contenders, despite dropping their chart-topping X-factor line up, although less for reasons of taste and more due to their
downward slide, with increased competition from the likes of Primark, who have become the nation’s preferred knickers outlet. Anyway,
they’ve got a disabled kid, and that’s a sure-fire winner, making them contenders for next year’s top slot. That’s if they can get enough
poor people wearing the clothes.

Then comes B&Q, with some kind of ongoing abstract morality play, even if the family’s kid is clearly adopted.

And pipping them to the post is the John Lewis snowman contribution. That’s John Lewis, who previously gave us

some kind of necrophilia between a 1920s shop assistant and an everyday Nuts reader; now pulling out all the

stops to offer up their Peter Sutcliffe-style travelling snowman.  And last but not least, the Waitrose entry, with its sparse charity angle.

They’ve surely missed a golden opportunity by failing to have Heston and Delia slug it out to a Gangnam beat. And Argos sadly fail to get in

chart contention, with their David Bowie remix of alien life forms wondering what a weird fucked-up place we live in, before having sex with a

Still, who really cares? With the prospect of a fiscal future as bleak as ours, anything goes. To quote the wonderful Roy Wood; “I wish it could

be Christmas every day”. If only to forget the shit we’re in.

Amen
Home Defence UK
A Symptom of a Greater Malaise
HOW I SPEND MY DAYS
with The Reverend Harry Figgis
ALL HOBBIES:
Now Then, Now Then, As It ‘appens, Guys and Gals...
15/11/12 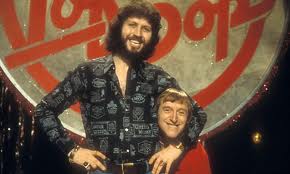