Home Defence UK
A Symptom of a Greater Malaise
HOW I SPEND MY DAYS
with The Reverend Harry Figgis
ALL HOBBIES:
All Englishmen Are Equal Under God, But Some Are More Equal Than Others
04/02/11

Good morrow my flock. This week’s sermon looks at the

roots of Englishness, of tea and cake, snorkers and mash,
heritage and class. The history of this green, pleasant and soon to be tree-less
land is full of Kings, Queens and posh types who many look up to as their betters. The Tories tell us we are all in this situation together but, in truth, class and hierarchy are firmly back in fashion.
The Church of England has always colluded in a ‘right thinking’ English tradition of knowing one’s place, for their chief on earth is not God but whoever sits on the throne. A crafty sleight of hand by Henry VIII for off-loading a wife or two and increasing his revenue pot has made our Queen next in line to God, and the rest of us are way down the guest list. The church is run by the monarch, who has always decided how history would be recorded, often skipping any tidbits that didn’t show their regal majesties in full pomp and

circumstance.  But politics, stupidity, and even the madness of some royals has slowly eroded

their majestic power to write the past, revealing them as fallible after all. Jump forward a few

hundred years and class has become an anachronism, while history is a revisionist tool to right

social wrongs. The golden age for re-writing the past without regard for King, class or

circumstance prevails. Until now that is.

We are about to see the cultural map rewritten, what constitutes Englishness returning to 18th

century values wherein the few own the land and the rest are serfs or oppressed. The Tories are

annotating history to suit themselves, and reintroducing the worst elements of the class system

simultaneously.
There was a time when one could recognise a King as the one without shit on his personage. Today this figure is a touchy-feely version of the old snob elite, reinvented for a sap audience eager to embrace stability in a difficult time.  Take 'The Kings Speech' for instance. This is not simply a precursor to everything we are about to receive, but a parallel world in which there exists a threat to tradition, a class system in turmoil and a country on the brink of destruction. Sound familiar?
The film’s plot plods along as follows: Nazi-loving royal playboy dandy gives up right to run firm to
run off with ‘common as muck’ divorcee on holiday in Germany. Several photos of goose-stepping
dandy giving Hitler salutes bring fear of possible plan to get old job back if new-found friend Adolf
finds work for him in takeover bid. Enter dandy’s shy brother who has two kids, a Stepford wife
and a speech impediment. Shy brother unwillingly takes on role as CEO of firm with help from
antipodean therapist who lacks respect. Stuttering dandy stand-in gives rousing speech,
antipodean therapist learns respect.
Takeover bid is thus aborted, leaving firm intact and any memories of nasty associations with Mr. Hitler swiftly forgotten. Order, pomp and class are returned, stand-in is human but regal, just one of us who are all like them. God save the King, blah blah blah, rousing music (available on CD or download), and everybody is proud to be British. Oh, and there’s some bloke called Churchill in a minor role who praises the royal dandy at first, but is saved from the historical dustbin by rousing war-time speeches and a cunning ability to flog car insurance (even though he claims the biggest threat to civilization is not Hitler but some bloke called Gandhi).

A nice story, maybe even an allegorical one, but absolute fiction. The movie dresses up a

wherein even the disrespectful therapist and his missus get to have tea with the Queen Mum,

who then proceeds to “be Mum” and pour them a cuppa. None of this is either true or possible.

In reality Chamberlain appeased Hitler, leaving other parts of Europe out on their own. The

stand-in King backed this idea so hard, he had Chamberlain appear on the balcony of the

palace before attending the lower house, the gravest constitutional insult of the century.

Being English was a different concept back then. Posh people praised appeasement and

possessed a foolproof system to keep the poor out. If you were posh and your parents had

money they sent you to public school, you went to a top university, into the army or church or business where you met other posh people. You got a top job, married a posh person, had posh kids, sent them to posh public school and so on. You despised poor people, made sure they never got their hands on your posh money or grasped the opportunity to improve their lot. Social mobility was governed by your background and privileges, not your ability. Most were deemed inferior; a foreigner, servant, or just poor. Jump forward seventy years and a few Labour governments and suddenly toffs are the enemy, all property is theft, and no one dares to lord it over one another, until now. Until the return of the Tory party to power, until The Kings Speech.
For a long time class and privilege were something quaint but thankfully past, briefly revisited in the
eighties with Brideshead Revisited, Tim Nice-But-Dim, and pressed blazers. Like a Tory party
conference, it was there only for amusement, an anachronism thankfully powerless. But the tide has
turned, toffs are on the rise again and unafraid to show it. Yes, being an upper class twit is
fashionable once more.
A growing number of formerly closeted public school types now feel safe coming out of the tall boy
and announcing to the world: “Look, I’m posh!”. Indeed, a recent photo published in the press had
the Camerons hiking with Tim Burton and his wife, the Queen Mum.
So what I hear you cry, Teflon Tony would often court pop stars and arty types to give his

slippery presence some kudos. This is what politicians do, toady up to celebs in the hope some

of their glamour rubs off like fairy dust. But the celebs in question are not looking to find a

political voice, or angling for a trendy endorsement. These are poshos hanging out with other

poshos, keeping their distance from commoners and making sure the lower classes are not part

There is a growing list of artists, musicians and actor types all happy to claim their silver-spoon heritage, who see themselves as better than the rest of us because of it. This may seem harmless, a few chinless wonders poncing about because of their parents’ dosh and the fact they got buggered at school, where's the problem?
Well, The Kings Speech and toff-speak in general have not only skewed the past but they are fast
distorting the present. There is another movie on release that has not received the topical acclaim it
deserves. This movie is not about the wealthy or showing a rose-tinted view of some England that
never existed, of Kings and Queens who drop in for tea, or family Nazis conveniently airbrushed
aside. It is a movie about working class people, about oiks, chavs, the scum of the earth. The film
is called Neds and it tells us far more about what it is to be English than any plum-toned
Oscar-bait currently on offer.
So remember, behind the privilege and fagging lies a darker side, of haves and have nots, of those with money and those without, of those who write history and those who make it up. The buggered are fast becoming the buggerers, and it is the less than privileged who will take it up the Mark Ronson. The wholesale transfer of public ownership to private hands through a fire sale of the nation’s culture is just the start. Kiss goodbye to your forests, canals, libraries and disability benefit. And there’s a good chance some Eastern European gangster will soon own the park your dog craps in. However you look at it, a nation collectively curtseying before dribble like The Kings Speech while this goes on is truly lacking in class.
Amen. 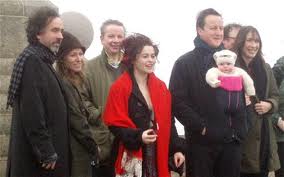 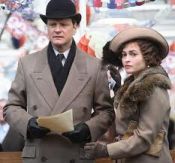