HOW I SPEND MY DAYS
with The Reverend Harry Figgis
Home Defence UK
A Symptom of a Greater Malaise
Biblical Plagues, Swimwear, & The Danny Craig Fitness Plan
10/02/07
ALL HOBBIES:

This sermon is a warning to all of a Biblical plague about to be unleashed upon an unsuspecting public. Come

summer, on beaches and in back gardens around the nation, small children will wonder, women will laugh out

loud, and grown men will make fools of themselves. We have been visited by this imminent infestation once before, back in the 70s, but this time not even God can stem the tide. More deadly than a plague of locusts, even the four horsemen would not attire themselves in this manner. I speak, of course, of the devil’s own love pouches: Speedos. One would have thought only the weak-minded could avail themselves of such a Satanic temptation, risking shame and ridicule in order to look like a prat on

the beach. But even back when Baywatch was a byword for Saturday night viewing and the reason video recorder

repairs were at their peak, few would press pause to see the Hoff's love nuts in Speedos rather than Pam’s bouncy

And yet we are about to depart on a journey into the depths of hell. What is to blame for these coming monstrosities

I hear you ask. Who is responsible for this incipient damnation? Daniel Craig, that's who.
I have long admired Mr Craig, I particularly enjoyed his work bringing home Francis Bacon in ‘Love is the Devil’. But this time the devil is not Bacon-related, in fact it’s more akin to small sausages. Many of my female congregation have
expressed the view that Daniel is fit, hot, sexy, "cor… I would" and "what a body!" they say. He is seen as an
icon of fashion, the world's best dressed man, the new and greatest James Bond. But look closely at Casino
Royale and one can see a Satanic fashion trend in its early gestation.
The gorgeous Dan is seen dipping and striding in and out of the sea, his bronzed torso an example to couch
potatoes everywhere, a star illustrating that exercise and a fit body always pulls the birds. And what does he wear
to shield his love trumpet from those sandy crabs? Speedos. Badly dressed Brazilian gigolos, triathlon athletes,
even iron men, have the balls to wear them, but to the likes of you and me, what looks good on Dan is far removed
from how we conduct ourselves on a family beach, boasting only a single chipolata beneath the overhang of a beer belly for public display.
It is fair to assume that Mr Craig's seaside antics have caught the sexual imagination of the nation's women and, as a result, many

men will assume that what women want at the seaside is a man in Satan’s skimpy Lycra sausage pants. Even

I have been tempted by the dark side, have ordered my own pair and begun burning the beach baggies as we

speak. I’ve enrolled at a gym, gone on a diet, and in my mind’s eye I’m almost there with Dan in the surf. This

summer’s beaches will be awash with fat blokes in Speedos looking more like Frank Bough than the Hoff, and I

will sell my soul to join them.
Yes, I have publicly espoused my intention of purchasing said garments to parade up and down the seafront this
coming season like some strutting peacock. I’m serious, if Daniel Craig can do it then so can I. Unfortunately I have
to get in shape or end up looking like an oversexed Greek waiter on heat. Obviously my motivation is not so much
to emulate Daniel and become a homosexual role model, instead I simply intend to get some female attention, the
best motivation of all. The knock-on effect is that I am fast becoming the person I never thought I would be. No, not
fit, healthy and sexy, but vacuous, vain and narcissistic.
There are several diets and exercise programmes available to help me in my quest for the body of an Adonis. The ‘C’ plan was a non-starter; too expensive, and the side effects (transforming me into an estate agent wanker, eager for the nearest wine bar), were not part of my grand plan. No, the goal was to exchange my podgy stomach for a mini-mountain range the ladies would pay good money to hike. How could I achieve such a playground for the fairer sex? The Red Hot Silly Buggers claimed that copious amounts of sex would make a popping abdomen out of a pudding gut, but I needed to put the horse before the cart as it were. Mishima got fit

late in life, but he had other issues going on that make the wine bar wanker look almost normal, not least

cult-leader mass suicide tendencies and a fascination with ritual seppuku.

It is my intention to get fit and become a better man, but I’m not a lard-arse right now, I just need to tone

up what God has graciously bestowed upon me. And so I have embarked upon Mr Craig’s rigorous

exercise programme in combination with a healthy diet. No more kebabs, beer, or Chinese take-outs for

me. I am four weeks in and can already feel the burn. I’ve lost over thirty pounds and feel like a fitness Nazi. If I were to take off the fake Omega watch I’d almost make my ideal weight.
You know, I used to mock those super-fit men who dedicated their lives to the vacuous pursuit of beach dandyism or those pathological health club fitness freaks. But now I am addicted. I want more than heroin chic, I want a six-pack to turn heads rather than stomachs. My diet is still 75% fluids, but now I’ve switched from wine and spirits to fruit juices, smoothies, and protein drinks. Rarely will a solid pass my lips and I exercise every day, achieving 150 ab crunches, not to mention the reps for my upper torso undertaken with ‘Argos York’ weights. I swim, run, and eat a balance of protein with carbs that would
make a waif-like supermodel jealous. I can even stand in front of the mirror admiring how good I look,
whereas a few weeks ago I would have wondered who that fat bloke was staring back at me hungrily.
I am truly on the road to recovery, but at what cost? This fascination with myself, a sudden
self-absorption, has raised my expectations for the female sex. No more staring through beer goggles
looking for an also-ran, now I want more and am looking to aim higher than Kathy Burke or Bella
Emberg. Surely I will reap what I sow, finding a partner who will quickly become obsessed with the
Danny Craig-lookalike me. A new world of beauticians, hairdressers, make up counter assistants
and pole dancers beckons, for they are good looking women who like men with flat stomachs and
big arms, Rohypnol or no Rohypnol. Life is as sweet as Castlemaine XXXX, and yet still I suffer from
self-doubt.
Then I think; my motivation for getting into shape may well be spurious, but ask any woman her opinion of athletic men and one will always get the same reply. Being fit is good, and exercising several muscles solely to get the chance to exercise another one may

not be such a bad idea after all.

So there you have it, 2007 finds me reinventing Harry Figgis from some also-ran local Vicar to a nubile sex God

(forgive me father, not meant as a criticism but I have to model myself on someone). I look forward to the

Spring, to sunny days by the seaside, to Speedos hugging my butt and the adoration of desperate housewives.

What more could a man of God ask for, apart from maybe forgiveness? Oh well, forgive me Father for I am 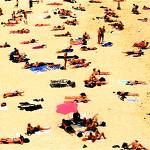