Home Defence UK
A Symptom of a Greater Malaise
HOW I SPEND MY DAYS
with The Reverend Harry Figgis
ALL HOBBIES:
The Padawan Menace
04/05/12

Somewhere in a Galaxy far far away, and completely out of touch with the ordinary folk,

young Padawan Cameron masters his Jedi mind tricks:
.
“This is not the culture secretary you are looking for.”
(not without a ministerial standards investigation)
Impressive stuff. But where did Dave hone these galactic mind-bending skills? The PM would have us think he was born with it, along with the ability to lead the Rebel Alliance and Princess Osborne, sorting out the economy on the way. However, the truth is stranger than fiction. Even with the lack-lustre help of Solo Clegg and his

ever-so slightly Rebel faction, this is a tall order. It is said Dave discovered he possessed the Force as a boy, back on his home planet of

Tofftooine, while watching repeats of the movie Star Wars.

Over in the real world, if TV or the Conservative party are anything to go by, when times get tough, what better way to forget our troubles

than retreat into the past? To a time when everything was better, bigger; more quaint and innocent. You knew who the good guys were,

because they were better than you, and everyone knew their place.

So far this year we’ve had a diet of posho drama, the upper classes lording it up in Downton Abbey, drowning
on the Titanic, beating up the poor with Dickens or buggering the economy for everyone else. What better way to combat the stark reality of
how broke we are than to stick our heads in the sand of a seventies revival? Back then toffs were honest and upstanding, and it seems Dave
has taken this retro idea a step too far by reverting to his childhood, convinced he’s some kind of Jedi knight. While the nation may be content
to roll out the platform soles, Oxford bags, Tank Tops, bad hair, terrible dancing, and fashionable retro chic, Dave’s busy mastering the Force.
But the stark reality is that the halcyon days of Tiger Feet and Saturday Night Fever are now seen by many as sowing the seeds for today’s
destruction. Who dare argue, in light of the precarious fiscal event horizon we teeter on, that those were happier times? Back then people

passed away the winter hours with their senses dulled by Burt Bacharach and Val Doonican, huddled

round a candle, watching Bruce Forsyth humiliate members of the public; teasing them with cheap

trinkets on a cheap conveyer belt and cheaper jokes. Meanwhile the Dark Side was making plans for world domination. Good

game, good game, or just good grief, good grief, who really cared at the time? We were all oblivious to the Evil Sith; Lord

Murdoch’s dark plan. Today Dave’s future as a Sith Lord running his Death Star is near complete, and he’s not the first

politician to have been drawn to the charms of the Evil Empire.

As the seventies generation watched disco dancing on Top of the Pops without a care in the world, Darth Thatcher was busy

snatching their children’s milk. The young, dandified, gender-bending hipsters were blissfully unaware this hedonistic greed helped to ferment the dark side. They had no idea their pensions would be worth bugger all thirty years on, and the chances of attending London 2012 without a Willy Wonka Golden Ticket were pretty damn remote.
In spite of such dire prospects, we all need a form of cheap nostalgia (in-between Royal fawning and Britain’s impending absence from the Olympic medal podium). What else can boost our collective morale in times of need? Dave knows this. While the seventies gave us the winter of discontent,
these days we feel a more catastrophic chill. How better to avoid our impending financial ruin than by pretending it’s not
there, seeing everything through a blast helmet while beating up the less fortunate? Feel the Force Dave, feel the Force.
To be honest, through a blast helmet is the only way to look back on the seventies. If any era is defined by its appearance, with
the twenties in black and white, the forties in technicolour and so on, then the seventies were a dank shade of brown, witnessed
through a shit-covered filter. If you harbour any doubts about this, just watch the neverending repeats of Carry On Abroad on Dave.
The sheer shitness of that decade comes seeping back like a leaking toilet on a package tour. The seventies were definitely a
shade of brown, and for some the Dark Side’s rise started with the loss of Shillings, Sixpences and Thrupenny Bits; the beginning
of the end for our colonial heritage, all of it happening when Dave was just a Padawan. Ok, an arrogant posh Padawan who didn’t
know the price of milk, but when your sights are set on the glory of the Death Star, who needs such trivia?

First our coinage, then our independence from Europe, both sacrificed to join the alliance. It was as if we won the war then lost the

peace. These days if you mention ‘the war’ children of the seventies envisage Iraq or Afghanistan. But back then WWII was a

national fixation, trumping the Royals in popularity because it was the last thing we were any good at. Britain had yet to waste North

Sea oil or enjoy the political incompetence of Darth Heath and Darth Thatcher, neatly disguising a country on the skids with one

Indeed, the seventies may well have sown the seeds for the mess we’re in today; Conservative

rule, the Common Market, Bank deregulation, the rise of the Evil Sith Murdoch, greed and
avarice as a lifestyle choice. But despite the abject crassness of the decade, Dave knows where we’re headed and it’s “still the
fault of those pesky Europeans, unions or poor people”; as good a defence now as it was back then.
The decade was one of political turmoil, mass immigration, unemployment and increasing fuel costs. Sound familiar? All that’s
missing today is high inflation but don’t despair; that’s coming to a galaxy near you very soon. The decade ended with another
memorable quote: “Where there is discord may we bring harmony, where there is despair may we bring hope, may the Economic Market Force be with you”’. How quaint Darth Thatcher’s words seem today, almost like we’re all in it together. Well, some of us are at least.

Today our precious government of fragile millionaires seems hell-bent on reenacting the past, basing a predicted recovery on flawed

political and fiscal religion, as sane as believing the Force exists and everything can be blamed on Labour (two years down the

Brooks continue to improve their Leveson truth-bending skills. No doubt more examples of the Dark Side’s temptations will be

revealed by those true Jedi Masters in the fiasco; Jedi Lord Leveson and Jedi Jay. Apprentice Hunt may have to fall on his light

sabre and follow the example of his apprentice. Either way, his political career now has a tinge of seventies colour to it. Will

Padawan Dave fall like Coulson and Brooks? The Leveson inquiry has fast become a saga of incompetence of galactic proportions,

and truths are still to come out? Who would have believed people might suggest that Lord Sith and Darth James were not

competent to command a Death Star?
In these dark times all we can do is hope that Dave’s imaginary Jedi skills can mind-warp the economy into thinking austerity is working, and that the banks will give us back the money to which they helped themselves. Honestly, that’s about as believable as “I did not discuss the BSkyB bid
with Rupert and Rebecca at that Xmas party, go about your business - there is nothing to see here.”
That bit of mind-bending doesn’t cut the mustard any more, even if it did work on a police horse. As I write, a darker more
sinister figure is emerging from the shadows to challenge Dave’s Jedi skills; the deposed Sith Lord Ian Dumping-Smith. IDS
dares suggest the poor have just about had enough. Isn’t it always the quiet ones? What better way to watch the Tory Death
Star implode?
Amen and may the… well, you know the drill. 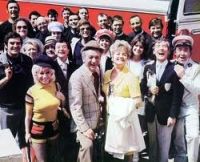 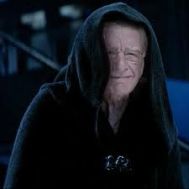