HOW I SPEND MY DAYS
with The Reverend Harry Figgis
Home Defence UK
A Symptom of a Greater Malaise
APCO & Co. - Purveyors of Fine Water Cannons Since 2014
23/05/14
ALL HOBBIES:

Good Morrow, One and All.

Is it me, or does there seem to be a fly-on-the-wall Police documentary on every

channel, every hour; even the Lord’s day. Obviously there’s a market for this kind

of entertainment; it’s cheap to make and acts as a handy advertisement for the
boys (and girls) in blue, all doing what they’re paid to do by us, the tax payers.

But what we have now is a long way from the likes of The Blue Lamp, Dixon of Dock Green or Z Cars. Jack Warner would be spinning in his

grave if he could see what’s become of his beloved Police force. In PC Dixon’s world you knew who the bad guys were, even as the coppers

were all friendly, honest blokes. There was no ACPO or militant Police federation, let alone bent filth. Those were times when a police box was

fit only for frozen coppers, not Peter Capaldi.

APCO, if you’re unfamiliar with the acronym, is the Association of Chief Police Officers. They’re a sort of

or spying on anyone who doesn’t share their political / corporate outlook. Yet ACPO are also a kind of tactical

oversight team for the police forces of England and Wales. This despite being caught in numerous scandals

provocateurs within protest groups. They promote the tactic of ‘kettling’ (mass detention without trial) in order to

without mention of the unlawful hoarding of DNA records on a million innocent people, or the use of £1.6 million in anti-terrorist funds to rent eighty central London apartments, the majority of which remain empty for most of the time. Yes, that APCO.
Back in the day, British televisual policing was peculiarly quaint; all tea, biscuits, Morse and “it’s a fair cop guv’nor!”. In those days we had to look to America for the action, car chases, SWAT teams and gratuitous violence. British coppers were a cut above all those Johnny foreigner types; our Constables had dignity, charm and nothing but a truncheon with which to uphold the law (unless you lived in Northern Ireland, where you could generally expect a baton round rather than a caution).
How far away those halcyon days seem now. Judging by what’s on TV these days, you might expect the local plod to turn up in full body
armour, ready to tazer for some minor infraction. And if they suspect any form of resistance look out; they’ll send in the armed response

team unannounced. All of which brings me to the point of this week’s sermon.

Today I want to talk to you of Mrs Theresa May. You know the one - she of the fuck-me footwear and Tory

own buffoon and Prime Minister-in-waiting, was there to add his fourpenneth, claiming it wouldn’t have made "a blind bit of difference"

during the Tottenham riots but might have helped with Croydon. You can trust Boris to have his finger on the political pulse, in spite of the

deputy chair of the London Assembly's policing committee, Jenny Jones, warning Mrs May that allowing water cannons to be used would

"further damage trust in the police".

prevent "more brutal alternatives" such as baton strikes or teargas. That’s it Bernard, stick the boot in. And

let's not forget your boys tazering a blind man armed only with a white stick, because some

poorly-sighted copper thought he had a Samurai sword. Or maybe spare a thought for Dietrich Wagner,

Although there’s no recorded information on the use of water cannons in Northern Ireland since 2008 (the only part of the UK where they’re currently allowed), according to a Metropolitan police report "no injuries were reported, directly as a result of [their] use". However, falls to hard surfaces have caused broken bones, direct blasts to the ears have damaged victims' long-term balance and a 2013 report by the British government's
Defence Science and Technology Laboratory found "good evidence to indicate that serious injuries have been sustained by people
subjected to the force of water cannons".
Bernard obviously missed that memo. Meanwhile, in an ominous move, the Association of Chief Police Officers' lead in national conflict
management, Chief Constable David Shaw, has warned commanders they would need to be aware of their duties under the Human
Rights Act, specifically those articles on right to life and prohibition of torture. In the UK water cannons are classified as "less lethal"
weapons. They are not "non-lethal" because the police acknowledge they can, on rare occasions, cause serious injury, or even kill.

So, would their use have helped in the 2011 riots, and why do we need them now? Sir Hugh Orde, the APCO president, in his evidence to the

London assembly, said water cannons "buy you space", and would "fill a gap in the armoury" of the Met. Conversely the civil liberties

campaigners at Liberty point out that water cannons are "militaristic and brutal". There’s no doubt the presence of these huge vehicles would

inflame the peaceful nature of public protest in Britain. After all, how can you protest effectively against a non-negotiable power when that power

could take your eye out at any moment?

streets of England and Wales. The main advocates for using water cannons against British protesters were Boris
Johnson (who is not a policeman) and ACPO (yep, them again). It’s worth remembering this when the press report that the police ‘want
water cannons’. These claims are based on a document produced by ACPO, which is a private company and not ‘the police’. APCO’s
position as an independent advisory body is further complicated by its funding from the Home Office, something that leads to a direct
conflict of political interest. It's interesting to note that ACPO’s report acknowledges there are a number of deeply concerning issues
here, including the ‘smoking gun’ admission that use of water cannons would have been almost totally ineffective in halting the "fast, agile disorder" and "dynamic
looting" that took place during the August 2011 riots.

effective manner were the Countryside Alliance protest of 2004, the demonstration against the Israeli military assault on Gaza in 2008-09

and the student protests of 2010. All of these were largely peaceful but had been infiltrated by a tiny minority of troublemakers. So,

approximate use: four times in ten years. And that at a million quid a cannon. Essentially then, said devices would get less use than

a snowplough at Heathrow. The aforementioned report also contains another telling prediction from ACPO, namely: "it would be fair to

assume that the ongoing and potential future austerity measures are likely to lead to continued protest". Are ACPO justifying the use of

cannons based on an expectation the Tories’ ideological experiment will cause further unrest? They certainly appear to be.
Excuse me if I’m a tad dumb on this one, but let’s run through that again. We apparently need water cannons to prevent criminal behaviour
like the 2011 riots, even though said cannons would have been no real use in that particular situation. Then again, they might come in
handy when crushing dissent. For example, those pesky tree-hugging anti-frackers in Balcome, or anyone wanting to march up and down
their street in protest against the Bedroom Tax. The mere presence of water cannons can have a deterrent effect against people
considering whether to exercise their lawful right to a peaceful protest. And don’t forget APCO’s remaining rationale: "in the absence of
the availability of water cannon tactics, it is likely that police commanders would have to authorise alternative tactics (involving significant
force) which may include baton rounds, mounted officers, vehicle tactics, police dogs or even firearms".
So, forget your pointless local Police Commissioner, forget the shenanigans of the Police Federation as they fit up members of the government and, most of all, forget

Mrs May’s threats of police reform. Next time you watch one of those fly-on-the-wall TV programmes, ask yourself this: does it really take

ten burly coppers dressed head to toe in riot gear to batter down one addict’s door for the lost flakings of his weed grinder? Or muse over

the justification for tazering some Geordie drunk who’s had one too many. Or consider why PC Plod needs to drive an EVO 10 at

break-neck speed, risking pedestrian life and limb, to bust some white van man with out of date tax and insurance. Then perhaps spare

a thought for what’s flowing down the pipeline to a protest near you, very soon. 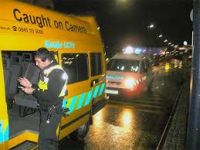