HOBBIES
with Clint Panzerdivision
Home Defence UK
A Symptom of a Greater Malaise
LOAD ""
Video Gaming For The Obsessive
ALL HOBBIES:

correspondence. Regrettably, the sheer volume of this makes it impossible

to read every letter and email individually, so instead I have them forwarded

with a statistical breakdown of key trends in a monthly report.

Increasingly, what many of you are telling me is this: "Clint,

while we find you comedic take on football journalism to be:

reading a column about console gaming*.

Never let it be said that Clint Panzerdivision was a man who stood in the way of popular opinion.
Video games, unlike – say, the inexplicably popular sport of Association Football, are both fun and not
shit. However, there are aspects of Overlord II (Triumph Studios) I found almost as irksome as England
qualifying for a major international championship**, which is a shame, since it's not without potential.

The game casts the player in the role of the Overlord, a fiery-eyed despot who

presides over a cackling gang of evil minions – like the late Lady Thatcher in the mid-Eighties (ho ho). The

Asterix and Obelix style caricature of Imperial Rome***.
In tone it's a mildly juvenile but not unlikeable parody of the usual sword and sorcery staples, and the
gameplay is a reasonably comfortable mix of strategy and third person action. While the Overlord has a
small range of upgradeable weapons, armour and magic at his disposal, progression primarily revolves
around the minions, a cheerful bunch of cartoonish gremlins who come in four flavours with varying degrees
of usefulness to particular missions. They can, for example, be commanded to attack enemies, fetch loot,
scale walls, row boats or round up fleeing villagers, and in a visually pleasing touch they'll also use items
picked up on the battlefield, be it swords or silly hats.
Throughout the game the player has the option to choose the path of domination or destruction, either slaughtering luckless victims for instant bonuses or enslaving them to provide a cautious by steady investment plan for the future. I chose the domination route since, y'know, I'm over thirty now, and fiscal security is more of a concern, though in all honesty it's not a vastly consequential decision.
So far, so groovy. It's a neat enough concept with a certain degree of intrinsic charm. Sadly, however, beneath its new generation console trappings the structure of Overlord II is notably dated, and manages to successfully recreate some of my least favourite gaming irritations. To wit:
1. While there is some choice in the order of missions, once the selection is made players will find themselves on a resolutely linear path to the end, with no mid-level save option and often frustratingly vague instructions****. This is, of course, much like real life, but

as is almost universally recognised, real life is deeply unsatisfactory.
2. Much of the layout is heavily maze-based.  Admittedly, as Big Al can testify, I'm quite capable of getting lost

on the way to a pub I've been to before, so perhaps it's just me, but I hate mazes. The only way I can navigate

an in-game maze is by following the trail of stuff to kill, and when everything's dead and I still can't work out

Asperger kid's trick from The Curious Incident of the Dog in the Night-time. And the map's bloody useless.
3. 350 lbs of war-hewn muscle wielding an axe the size of a fridge freezer: a drystone wall. It shouldn't be an impenetrable barrier. Perhaps it's a magic wall. Or perhaps it's a badly conceived construct designed to keep me on the unalterable path of a bloody sodding bastard maze. 'Nuff said.
In conclusion, Overlord II just about works as a sort of latter day Black & White with a half nod to
Lemmings, but if you're a 48 hour stint total immersion behind closed curtains only stopping to eat when
the pain in your eyeball becomes unbearable type of gamer*****, it's not going to do the business.  Where
are you, Shepard?

*** Asterix and Obelesque?  No?  Please yourself.
**** Incidentally, the most frustratingly vague game instructions of all time – to the point of being psychopathically arcane – can be found in the long-forgotten Spectrum game 'Teenage Emergency' (© A. Likilla).
***** The proper kind. 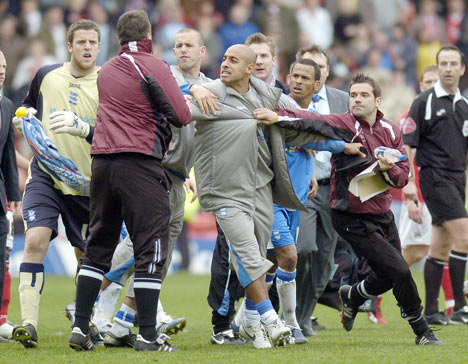 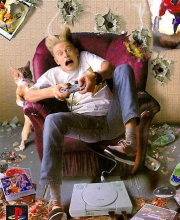