We file this report from the headquarters of the UK Independence Party, where

elections, a UKIP spokesman described the party's blueprint for success to our

man on the scene, depicting an act of geographical alteration so fantastic, it

initially sounds like the preserve of futuristic cartoons and Michael Crichton.
"Our plan is three-pronged." Explained party chairman, Girtstaple Chum, in a press conference
yesterday afternoon. "First we gain the necessary support in a national referendum. This won't
be a problem, since more than half of the British public are pathologically terrified of the E.U. as it is.
We've learned that, with Max Clifford's help, we can pretty much convince people of anything. Once this vote proves positive, then we'll bring about the change in land mass."
At this point the spokesman pointed to an ethnically obscure reporter who was there to represent one of the broadsheets, inquiring as to whether he was born in the UK. Following an answer in the affirmative Chum continued.
"Next comes the technical aspect. We have to engineer a major continental shift and this won't be easy, but with the donations flooding in I believe we can put the machinery in place to propel this green and pleasant land far away from mainland Europe." At this point Girtstaple began chuckling to himself, and when he spoke again it was in a melodramatic hiss. "I'd like to see Johnny Foreigner enter our country clinging to the underside of a Eurostar then! Listen to me all you asylum seekers, workshy immigrants and French tourists - we at the UK independence party are one step ahead of you, make no mistake!"

After a short pause, during which Chum wiped rivulets of grey sweat from his

heaving jowls, the briefing ended with assurances to those present that Britain

would be navigated around the North Sea by trained professionals, the chairman

in the field of continental drift, Mary Shoop, to ask her if what UKIP proposed was

"Normally I'd say no, not a chance. It takes millions of years for a land mass

to continue it's gradual dissolution and move away from a nearby continent." Mary

told us. "But Kilroy-Silk's behind this isn't he? I wouldn't put it past him to shift the

U.K. by sheer force of will alone. I mean, they'd need millions of levers and pulleys

to unmoor this country from its foundations, but rich Caucasian males don't let

physical realities stand in the way of their ambitions."

Indeed no. The oleaginous, perma-tanned Kilroy-Silk (62), initially made much of

his fortune coaxing tears from the recently traumatised on daytime TV, but

following overt expressions of racism in the British press this self-proclaimed "man of the people" who, as a child, once wrote a poem in praise of himself, turned his leathery hands to politics. Within months of calling all Arabs "despotic, barbarous, suicide bombers" and lambasting the Irish as "peasants, priests and pixies" the Silkman had installed himself and other likeminded bigots in the European Parliament with the avowed aim of exposing corruption and bureaucracy along with a more general intent - "fucking shit up".
"I don't want my grandchildren to grow up in a country called Europe." Ranted the deranged millionaire on GMTV recently when asked to explain why one of his MEPs had said businesses should never employ women because they could get knocked up at any moment. "My colleague was simply expressing what the majority of ordinary people in this country believe." Silk continued. "They know everyone in Brussels is incompetent and within a few years all of Britain's power will be transferred over to a gaggle of smelly Belgians. These days the British public thinks there's an Arab waiting down every back alley to ravish their daughters, and that's mainly thanks to me."
On the subject of his proposal to shift 'the homeland' several hundred miles up the map and into the North Sea, Kilroy-Silk was more forthcoming. "It's a dream, one in which all my subjects can share." Confirmed Robert, reclining smugly to stare out a horrified Eamonn Holmes. "I know what you members of the Metropolitan Cultural Elite are going to say, you'll say we can't just put an enormous outboard motor on East Anglia and propel a country of this size away from the French. Well, we can and we are."
Following the movement of Great Britain to its new, as-yet-unspecified location, the mooted next step among hardline members of UKIP is to blast the British Isles off Planet Earth altogether. This plan would leave the United Kingdom to orbit our solar system by itself, waving goodbye to all foreigners and achieving true independence for the first time. Unfortunately this utopian ideal has its opponents inside the party, not least Kilroy-Silk himself, who doesn't want to give up his two million pound holiday home on the Costa Del Sol.

Kilroy-Silk on his recent "fear-spreading" tour.
A sketch discovered at UKIP HQ depicts an early version of the plan 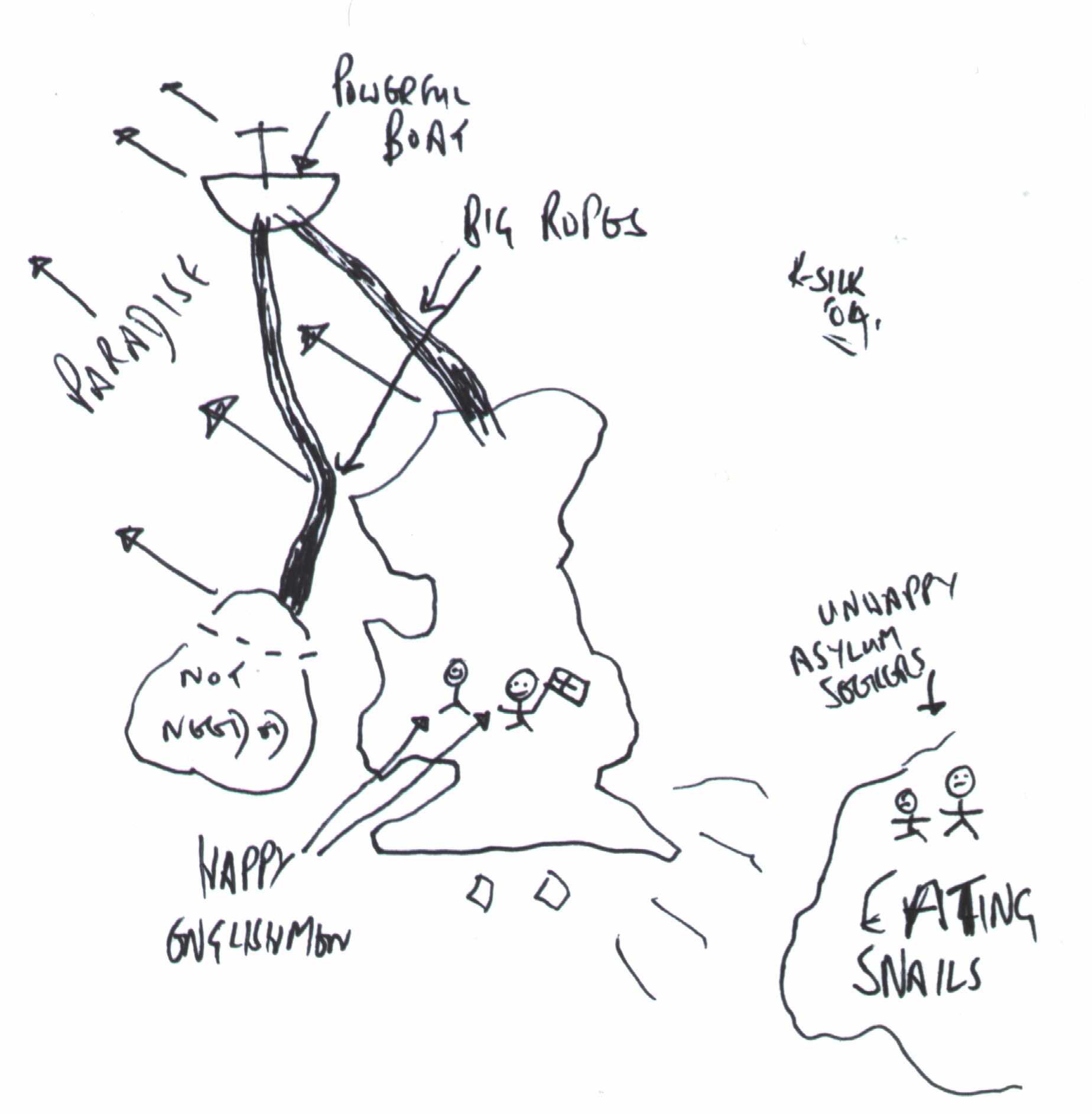