An emergency session of Parliament at Westminster, where ‘Diddy’ David Cameron has

today gathered his cabinet, Conservative acolytes and sympathetic pressmen to outline a

surprising course of action that will decide who runs the United Kingdom in a couple of years.

“I’ve checked the timescales and 2015 is simply too soon to have another one.” The Prime

Minister intoned, his swollen head all bloated and clammy after another sleepless night.

“Everyone agrees with me when I say that this country is getting back to its best. We just need a little longer for the true benefits of austerity, cuts and workfare to kick in.”

Diddy goes on: “There’s a pattern to the polls putting us somewhere between eight and fourteen points behind Labour and this

is, I believe, the result of my party being stopped from going far enough by our LibDem partners.” Here Mr Cameron gave a

pointed glance in the direction of Nick Clegg, who was silently staring into the middle distance. “There’s a real risk we could

lose power before our policies have a chance to reap dividends in terms of prosperity and happiness, something that is almost

certainly just round the corner, although possibly not before 2016. Or maybe 2018.”

“Sometimes the British public doesn’t know what’s good for it.” Cameron asserted, putting on his sternest puffin-face. “That

being the case, and with more to do in terms of modernising our many out of date institutions, travelling the world on

peacekeeping missions, helping the arms industry and arguing over the minutiae of EU budgets, all I’m asking is for a bit

longer, just a little bit.”
“The electorate may have to do without a general election for a little while, but it’ll be three or four years, max.” The Prime Minister concluded. “It’s not like this country is going to turn into some kind of military dictatorship in the temporary absence of democracy. Although I will be forced to use whatever’s left of the army to crack down on any protesting. Consider yourselves warned.”
Cameron’s announcement comes in the wake of a tricky few years for the PM. Since taking power and forming a
coalition, he has managed to cede the centre ground by focussing on benefit claimants and ‘the undeserving
poor’ while failing to halt the growing popularity of UKIP’s trademark ‘middle aged white men foaming at the mouth
about imaginary immigrants’. The rise of Farage continues, despite repeated attempts to position the
Conservatives against the European Union, and thereby prove they possess sufficient xenophobe credentials.
Meanwhile Diddy Dave has also contrived to alienate the right-wingers in the party with his latest ‘hug and marry
a gay’ initiative.
“At the present time, over halfway into the parliamentary term, Mr Cameron is, to coin a phrase, completely
bejiggered.” Westminster watcher and electoral analyst Shuggy Gitter told Home Defence. “Dave has managed to
upset the middle classes, centrists, parents, bleeding heart lefties, prejudiced idiots, women, ethnic minorities and a load of nannies who are now being made to look after six two year olds at once, like some kind of superhuman octopi. Meanwhile, those who value honesty, competence and the NHS have become ever more disillusioned. You’re talking about four-fifths of the electorate, at least.”

“While Cameron will no doubt pin the blame on others in his cabinet, citing George Osbourne’s utter failure on

the economy, Gove’s e-bacc u-turning and the ongoing court issues of Iain Duncan Smith, the truth is, were an

election to be held in May 2015 as scheduled, his party wouldn’t stand a chance.”

outright majority, not unless the global financial climate alters massively, or Dave gets really good at his job,

and what are the chances of that?” Mr Gitter goes on. “Cameron can’t just keep repeating ‘Labour spent too

much’ another thousand times and expect the public to swallow it. A postponement is the only course of

action left open to the PM, and he wouldn’t be without precedents for this decision.”
While this is true, the only times previously when an act made it through parliament to extend the incumbents’ term
to eight years or more came against a backdrop of war. In this instance, Cameron is expected to cite similarly
extenuating circumstances to bolster his case for cancelling the election, including the triple-dip recession, awful
flooding, the situation in Syria and a need to keep an eye on Boris Johnson, all of which gives Dave little time for
campaigning “until at least 2017”.
In fact, as Home Defence was going to press, it appeared the political establishment had accepted Diddy’s
argument that, just as a Prime Minister can call for MPs to be elected to the nation’s legislature more frequently
than twice a decade, he should also be granted the ability to make his own term an eensy-weensy smidge longer,
if there’s a really convincing case.
The ‘Everything Will Be Great Soon Act’ is expected to pass with only a bit of grumbling from the opposition and a
few fulminating Ukippers. Mr Cameron is also expected to cancel the next hundred sessions of Prime Minister’s

questions, as well as a scheduled appearance on ‘Daybreak’. Instead he will put out a press release to advise us there’s

no point in answering queries just now, and that the masses should instead accept “everything is well on the way to being

Meanwhile, much of the public were nonplussed by this announcement, with many muttering “this is exactly what you'd

expect from the likes of them” or claiming “I'm not surprised - politicians will do anything to cling to power”. Others were

uninterested in this looming abuse of ministerial privilege when we vox-popped them outside the bookies, with voters more

focussed on how they can pay the electricity bill, get new shoes for their children, or make it to the food bank before all the

groceries and other horsemeaty comestibles were gone. 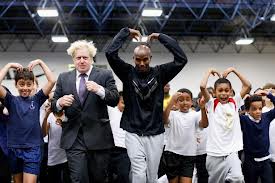 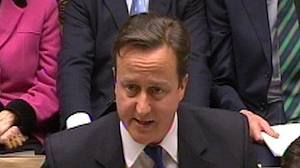 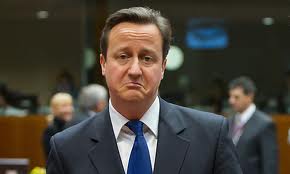 What won't be happening anytime soon.
A few of those in the running to be our next PM.
1