The chimneys and sitting rooms of a wintry Britain where, all across the land, children count

the sleeps until a jolly fat man comes in their chimney bearing radio-controlled cars, lumps
of coal and his nuts. But this year Santa has unexpected help in this spreading of festive cheer, with the junior
partners in our coalition government giving the electorate a special treat by spreading a little materialist joy of

“This is a variation on a very simple idea Nick Clegg posited earlier in the year, namely bribery.” Political analyst Bunkum Whitesox (left)

told Home Defence. “Back in June Cleggy suggested shares in each publically-owned bank should be given away to voters. If that worked

out everyone would then receive a stake in those organisations to be privatised over the next few years, including the post office, schools

and the NHS.”
“However, Nick’s freaking brilliant idea was nixed when his office discovered they couldn’t actually afford the administration side, and the shares to be given away were basically worthless anyway. Most importantly, they came up against opposition from their senior coalition partners. The Conservatives
were against this misguided scheme because ‘it didn’t benefit the rich’ so little Nicky had to go away with his tail between his knees
and come up with a better idea. This appears to be it.”
The Liberal Democrat party has long known a high-minded, self-destructive gesture was now called for, ever since the polls started
showing their support had fallen to -1% (within the usual 2% margin of error). The deluded mood at this autumn’s party
conference (right) was particularly galling to the public with Nick Clegg was celebrated as the new messiah. The party leader received
a series of standing ovations derided by the popular press as “turkeys applauding Christmas” and “a bunch of wankers noshing each
other off”. In the meantime, the only idea Clegg's party could come up with to improve Britain’s lot was suggesting some of our

Bunkum Whitesox goes on: “Basically the LibDems need to win back that support they lost on becoming the Tories’ lapdogs. They can

only achieve this by using their personal fortunes to buy a bunch of stuff and deliver it to the homes of constituents, disaffected party

members and the psephologically apathetic, in the run up to Christmas. How that’s supposed to help the unemployed pay their mortgages

I’m not sure, but in the absence of anything else Clegg’s definitely going ahead with this, and Vince Cable [The Business and Reindeer

Secretary - left] has also signed up.”

“Personally, I think they’re heading off down the wrong path. The only thing that can redeem this party now is a very public act of

repentance from their leader. The casting off of possessions is all very well, but they’d get more publicity if Cleggy stood up in parliament,

rent the clothing from his body and flagellated himself with a bushel of twigs. Either that or pin himself up on a crucifix outside St. Paul’s.”

But the never-ending quest to prove they’re really, really sorry for endorsing a never-ending

series of fuck-ups continues, errors that include a flatlining economy, the loss of libraries, cuts
to local services and Eric Pickles. Earlier today Clegg and Cable put a call in to LibDem MPs, asking them to sell off everything
they owned to raise money for the cause, even as the leaders undertook final checks to their specially-designed Liberal party
sleigh. This contraption, a cross between a helicopter, gypsy caravan and fighter jet, was built with proceeds from the recent
sell-off of the LibDem Party Headquarters, and it has been granted special permission to fly through British airspace during
December, depositing it’s cargo in the stockings of delighted Liberals such as former supporter Mavis Beaglehole (71).

frocks and gaudy jewellery has made me a lot less angry about the state of the country, although I still wouldn’t vote for that lot.

scheme. These include a hundredweight of leftover Oddbins vouchers from Charles Kennedy, the Spitting Image puppets of

Davids Owen and Steel, a number of rare Bosnian artefacts out of Paddy Ashdown’s private collection and Sir Menzies

Campbell’s pension book. But it is Cable who has led the way this yuletide. As of press-time Vince had
sold two of his houses, a small piece of land with an outhouse on it near Eastleigh and a number of nudie suits he used to wear back in the
seventies.
“This is a turning point for us.” Cable announced yesterday in a statement on the party website. “This year Father Christmas won’t be wearing
red with white trim, oh no. Instead he’ll be dressed in an all-yellow jumpsuit adorned, on the breast pocket, with our proud party logo: a shitbird.”

“As well as selling their valuables and giving every penny to the poor voters.” Mr. Cable goes on. “I have asked the few hundred party members

we have left to give their remaining stuff to charities set up in the proud tradition of the Big Society. These will pay for those essential

services our income taxes used to cover, like Solicitors For All who dispense legal aid to the needy, The SureStart Trust, various childcare

initiatives and, of course, Shelter, an organisation that has removed the need for politicians to do anything about the homeless for decades.

Merry Christmas everybody. Oh, and if anyone knows of any pilots willing to work for free get in touch. Nick reckons he can fly our sleigh

himself but I’m not convinced.”
Yet not all of the coalition has been convinced by these generous acts, with Conservative MP Louise ‘Uber’ Mensch (left)
calling the LibDem idea “something only a bunch of douchebags could dream up” and George Osborne publicly condemning
any help for the less fortunate as “communist”. The official Conservative line remains firmly against giving, that is unless it
involves spending money and thereby helps kick-start the economy. Yet some of the harshest criticism has come from Nick
Clegg’s own party with his deputy leader, the increasingly bitter Simon Hughes (right), refusing to get involved with the scheme
and telling anybody who will listen: “How these turncoats choose to absolve their consciences is no business of mine. This is
a private matter between Nick and his maker.” 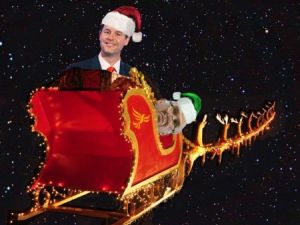 The Great LibDem Christmas Gift Giveaway!
Clegg and Cable Take To The Skies With Freebies For All In A Last, Flagrant Bid To Save Their Party
04/12/11
1