Yet recent months have seen a negative reaction from the

and the decimation of services among the needy and vulnerable.

This resistance has coalesced into a series of high-profile

protests, most recently last month when half a million

demonstrators shuffled through the streets of London calling for increased investment, libraries to remain open, and Vince

Cable’s head on a stick.

Although scores of different groups have come together under the banner of protest, it is the young folk and in particular

students, hit as they are with tuition fees and the promise of one job between twenty upon graduating, who have blazed the

clearest trail. During this ‘second winter of discontent’ the revolutionaries have gained attention and admiring headlines through illegal initiatives like breaking windows, vandalising Camilla Parker-Bowles, lobbing fire extinguishers off buildings and being
related to the bloke out of Pink Floyd. But as the warm weather arrives, and inspiration from uprisings across the Middle East as part
of the so-called ‘Arab Spring’ becomes increasingly obvious, a more drastic form of political dissent Is being adopted by these true
believers from higher education.
“We’ve lived under this terrible dictatorship for, um, must be nearly nine months now.” Unofficial student leader Ritzy Stagflation (right)
told us while making a ‘rollie’ in his Student Union bar. “Me and my comrades in revolution have smashed all this shit up, but the
government didn’t seem to take any notice. So some of us decided to take a lead from our Arabic and African brothers, men and
women whose courage brought about regime change earlier in the year.”
“We need to rise up and overthrow this hated coalition.” Mr. Stagflation continued, in-between asking nearby individuals for a light.“My
mates can’t remember a time before Cameron and his cronies were ruining our lives, although that might be because we were out
of it on cheap cider. That’s why I admire what Tarq and Rupe did. It’s all very well loitering around Fortnum and Mason, blocking the aisles and waiting to be arrested, but

if we really want to send a message to those tossers in power and inspire our contemporaries to make the ultimate sacrifice, we

have to lead by example.”

“Not me of course,” Ritzy continued. “They need me to stick around and write the press releases. You got any filters?”

The duo he mentions; Rupert Payback and Tarquin Burgundy, were students at Warwick University and both said to be fascinated

with the fate of Mohamed Boyazizi (left), the street vendor who committed public suicide in protest against corruption when his

goods were confiscated by the Tunisian authorities.  This act, filmed and uploaded to YouTube, resulted in mass demonstrations,

the overthrow of the Tunisian government and a chain of unrest that spread across Algeria, Jordan and Egypt. Rupert and Tarquin

were keen to bring this level of militancy and the so-called ‘Werther Effect’ to Britain, but the official response to their threats from

Nick Clegg was a statement telling the nineteen year olds they: “don’t have the courage to immolate yourselves by fire”, and “if you

think it’ll make any difference then bring it on!” The pair subsequently decided to visit B&Q, followed by a trip to the all-night garage.
“As best we can ascertain,” Warwickshire’s fire investigator told the inquest into their deaths. “It was the announcement that further lecturers would be laid off of their campus that pitched these young men over the edge. One afternoon they stood outside the Dean’s office with a large, grammatically incorrect, banner and doused each other in gasoline and paint thinner. Tarquin and Rupert then set themselves alight while cheering undergraduates yelled their
support from a safe distance. The two students expired in a welter of anti-war chants and burnt flesh. Apparently it was quite
a thing to see.”
Since their deaths other young men studying across England have opted to die by self-inflicted fire as all other tactics fail to
be heard by those in power. This trend continues a movement of ritualistic sacrifice thought to have originated in the Buddhist
tradition centuries ago. However, self-immolation didn’t gain widespread popularity until the 1960s, when monks in South
Vietnam adopted this method of self-cessation to protest the American invasion.  Since then there have been six hundred
politically inspired ‘auto-torchings’ but, until this year, the practice hadn’t spread to the western world, and certainly not as
far as those representatives of ‘the squeezed middle’ who grew up in picturesque market towns.

“The great thing about self-immolation, from a publicity point of view, is the visual and visceral nature of the process. It’s one

hell of a testament.” Political commentator Sanskrit Price told Home Defence. “Not only do these deaths further the collective

cause through the altruistic means of maximising pain and personal suffering, but they also lead to a pretty intense photo op

when the bereaved parents confront David Cameron during one of his ‘walkabouts’. We know political leaders end up with a

body count on their consciences, but rarely is it so clear as when someone is consumed by flames in front of you yelling;
Diddy Dave, Nick Clegg, George Osborne – this one’s for you!”

“In fact, I predict this practice will only increase as the cuts bite and millions start to suffer on a day to day basis.” Mr. Price

concluded. “By 2015 we hope to possess a litany of heroic middle class martyrs.

Although the possibility, as some have suggested, that their crispy corpses will be

nominated for the Nobel Peace Prize, is probably wishful thinking.”
The counter argument, as evinced by roly-poly Communities Secretary Eric Pickles (right) earlier today when he was
doorstepped by reporters, runs as follows:
“Don’t pay any attention to those dead fools,” Pickles was heard to mutter as he trundled away for another day of
destroying peoples’ livelihoods and confiscating the children of the poor. “It only encourages them.”
Home Defence UK
A Symptom of a Greater Malaise
NATIONAL NEWS
with Al Likilla
ALL NATIONAL NEWS:
UK Student Protestors Adopting
Tactic of Self-Immolation To Make
Their Point
18/04/11 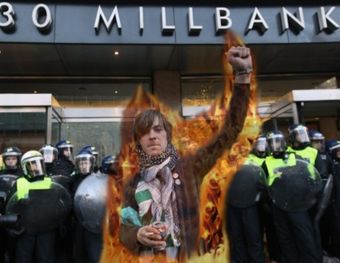 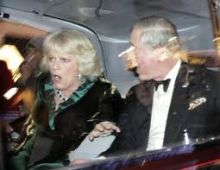 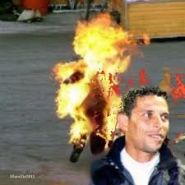 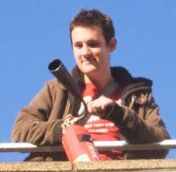 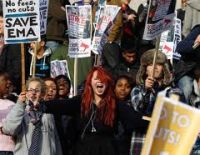