Home Defence UK
A Symptom of a Greater Malaise
NATIONAL NEWS
with Al Likilla
ALL NATIONAL NEWS:
All Of Prime Minster’s Closest Friends
To Be Imprisoned Within Two Years
05/07/12

To the seat of government in Westminster, where Prime Minister ‘Diddy’ David Cameron is

investigation into bribery, backhanders, corruption and cosy ‘country suppers’ between

they do to commoners” while sneering at Barrister Robert Jay with barely-concealed loathing. George (left) proceeded to

answer all the questions with “I went to Eton, I couldn’t possibly be wrong” in what pundits are calling a bravura performance of

arrogance and distaste for the law.

Those same pundits expressed surprise Cameron’s performance wasn’t as accomplished as his erstwhile chancellor, with the

P.M. forced to admit he made disgraced ex-News of the World editor Andy Coulson the party’s spin doctor when Rupert

Murdoch told him to (Coulson having taken the rap for News International’s phone hacking conspiracy, back when the ‘one-man

corruption' story still convinced people).
Lord Leveson called for quiet before asking a visibly emotional Cameron (right) whether he was aware of the seriousness of the crimes
committed by his close friends and old acquaintances, most of whom were furiously texting Dave a variety of emoticons, trying to get him
to shut up. At this point the Prime Minister broke down and began to cry, resulting in a cross-party vote of no confidence in the House of
Commons the following day. Here Labour leader Ed Milliband gained the support of MPs, 80% of whom signed up to a declaration that
asserts Cameron “is not a fit and proper person to run a large coalition government”.
However it’s not just pal Coulson’s crimes against humanity that are on Diddy Dave’s mind, even though the bespectacled scapegoat for
the wrongs of the Murdoch empire is expected to go down for perjury in Scotland very soon, thanks to a little white lie he told about
corruption on the witness stand (meaning we await conclusive evidence leading Coulson to be prosecuted for his real crimes). No,
Cameron’s bigger concerns surround flame-haired ex-editrix Rebekah Brooks and her hubby Charlie, who has been one of Diddy Dave’s
chums since his Eton days. This pair are right in the brown stuff, expected to be sent down for spending years covering up reprehensible
activity, as well as obtaining a used horse without filling in the necessary forms.

These and other members of the influential ‘Chipping Norton set’, a clique of privileged ne’er-do-wells who have come into money

through opaque means and bought expensive houses in the picturesque Oxfordshire hamlet for euphemistic ‘country suppers’, are

expected to soon become intimate with life behind bars. Their days will be filled with the ‘mucking out’ of slop buckets for tattooed

career criminals nicknamed ‘Bruiser’ or ‘Tank’, being forced to behave as sex toys whenever butch, lesbian warders visit their

Home Defence travelled to this locality (left), a beautiful market town in the Cotswold Hills where many of these villains have been

living openly for years, only to find a climate of fear pervading the residential streets and quaint tea shoppes. Most Chipping Norton residents would only speak on condition of anonymity, although local haberdasher, Duck Sorbet (right), broke the omerta when we
faked an interest in her tin buttons.
“I’ve never seen anything it.” Mrs. Sorbet whispered. “Who knows how far the Prime Ministerial web of intrigue goes? I was only
saying to old Mrs. Baker the other day, she comes in here for her thread you know, we had no idea horrible things were going on
until that nice Mr. Cameron started weeping on live TV. I feel bad for him, but he must have known what they were up to; hacking
the phones of dead girls, bribing the police, trying to cover their tracks by illegal means. He was at the Brooks’ house every
weekend you know. He said it was to give their gardeners advice on composting, but I know better.”
“It’s worse for those of us who've lived here all our lives.” Duck went on. “This tars everyone with the same brush. Nowadays
Chipping Nortoners aren’t willing to admit they’ve ever met Mr. Cameron. These are fine, upstanding members of the community
who’ve done nothing wrong; polo players, hedge fund managers, Internet entrepreneurs. You know, average folk. When the reporters come round they claimed not to know David or SamCam and there’s been a lot of ‘tidying away’ of anything that could connect locals to the family, if you know what I mean.”

deletion, and weekends spent shredding Christmas cards sent by the Camerons, with public figures unwilling to take any chances

for fear possession of these documents could lead the authorities to link them with the Prime Minister. On recent form, that would be

enough to see them up in court charged with anything from criminal conspiracy to misuse of public office.

Meanwhile the pressure is beginning to tell on Diddy Dave, with senior Tories turning on him

following a series of u-turns around rushed, poorly-written or simply incomprehensible policy,

and an incident at last week’s Prime Minister’s Question Time when Cameron was goaded
into calling Ed Balls a ‘bloody wally’ then proceeded to faint, having to be revived with smelling salts like some kind of prissy fop.
One Tory backbencher has since claimed that, when the PM came to, he was delirious, babbling: “I knew this would happen
the moment we let the police do their jobs. Where do these people get off, arresting their betters? Get me Rupert on the phone!”

But Murdoch (right) is one of many who no longer takes the calls of the puffin-faced chancer,

for fear of being the next victim of the so-called ‘Curse of Cameron’. No amount of persuasion,

intimidation or change in the law can save Dave’s network of nefarious crims now, no matter how defiant some remain. Most recently

it was the pal of political leaders Bob ‘Diamond Bob’ Diamond, who had to step down from his Barclays post to face the peelers and

a public baying for his bonus. Then, earlier this morning, Cameron’s mate and his lovely ‘Lady MacBeth’ Rebekah called a press

conference (left) to bully the Crown Prosecution Service into dropping the charges against them.

after successful figures: “simply because all available evidence indicates an overwhelming pattern

of illegality, and a good chance of conviction”, the former Mrs. Ross Kemp adding: “It’s a disgrace.

Why not go after benefit cheats, asylum seekers and paediatricians instead? Don’t you know

who I am?”
Such grasping at straws is unlikely to hold water with experienced judges, and it now seems inevitable Cameron will have to pull
himself together to cope with a future that involves spending his free time meeting pals and chums, not at some swish cocktail
party discussing the BskyB bid, but behind a plastic screen in the visiting rooms of HM Wandsworth and Parkhurst. 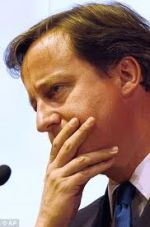 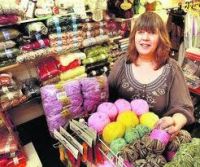 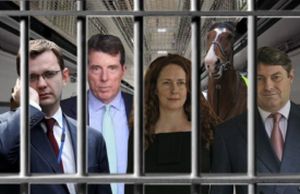 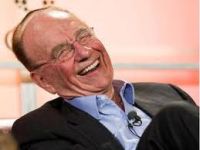 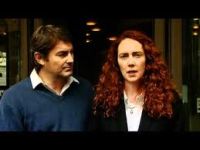 The new home is made ready.
1