Home Defence UK
A Symptom of a Greater Malaise
LIFESTYLE
with Archibald Scamp
ALL LIFESTYLE:
The Politician's Lifestyle
03/12/11

Civilised Nation? Bollocks are we.

The jeering starts as soon as the speaker’s mouth opens.  Abuse pours forth from the crowd;

mocking, teasing, heckling.  Ideas are shouted down as soon as they enter the realm of

consideration, attacked without courtesy.  At this stage I wonder if I should switch off Jeremy

Kyle, but then I realise I’m watching parliament in session.
Crap.

So this is how politicians, leaders, those allegedly guiding our country, do it.

With this example being set, it does explain rather a lot.

They abuse each other in the workplace, holler across the Commons at the opposition, barking like deranged dogs.  They lie and

deny, doing everything possible to avoid responsibility for whatever act of stupidity might threaten their prospects. They are so quick

to hang some fellow politician out to dry should a sordid tale become public knowledge, that any sense of loyalty, even to their own party, instantly evaporates.  Beyond that, there is the willingness to piss public money away on duck houses, and a desire to flip
properties for a quick buck (or whatever currency sits best in some bank account beyond the realm of the income tax inspector).
They’ll take whatever they can from anyone who doesn’t happen to run a bank.
Every time a referee gets barracked during a high profile football match, politicians line up to complain about the lack of respect.
That is, assuming they can get a word in before someone from the opposition party starts hurling more abuse.  Every time
someone is accused of theft there’s a politician waiting to lecture them on the morals of our society, ignoring the fact that
claiming money for a flat which doesn’t exist is, without a doubt, stealing.
Bunch of hypocritical motherfuckers.

But are all politicians like that?  Don’t know, probably not.  I suspect there are some

people with good hearts lurking out there on the fringes. Some place where they can’t make any impact whatsoever

on the knobheads who have more power than any individual so blinkered, so ignorant and corrupt, should ever possess.

The colour of the political party doesn’t matter, nor whether the party leader has any sort

of chin, or whether the entire party snuck into power on the back of sneaky backroom deal,

or whether each and every member of the party is a dick. Because at the end of the day,

all the politicians who claim to know what’s best for our ailing country, need to realise it
would be ever so nice if, instead of arguing and heckling, everyone could just pool their ideas and do what's in the best interests of
that country they’re supposed to represent.
That would be lovely.
Until then, I suspect everything will remain the same.  The government continues to fuck over the public sector because that’s the only part of industry they can control. Politicians haven’t any real power (or inclination) to do much about the excesses of the private sector. And realistically, these excesses only seem to impact on those who make donations to political parties, so best not upset them…

Occasionally people might go on strike for a day, but this never seems to achieve much beyond upsetting Daily Mail readers. On this we

could take some advice from the French.  They don’t fuck around.  It ain’t over ‘til the merde gets sorted, s’il vous plait...  Until that day

the poor will remain poor and downtrodden, the rich will remain rich and aloof, the middle class will get screwed for taxes, and equality of

opportunity will sound good but mean nothing. 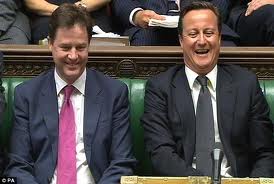