HEALTH & UNWELLNESS
with Archibald Scamp
Home Defence UK
A Symptom of a Greater Malaise
ALL HEALTH AND FOOD:
The Birth of the Wellness Guru - A Home Defence
Guide
20/11/15
How are you feeling?
If the answer is tired, sore, itchy, achy, creaky, grumpy, hugely constipated or any synonyms of these options, worry not: there are
people who want to help you. And when I say help, I mean they want to encourage you to get a kale juice enema. Or eat broccoli bread.
Throughout civilisation, there has come endless advice about how to stay healthy, given by governments and experts and government experts (absolutely nothing by ‘expert governments’,
curiously). Here in Great Britain they focus on how we can stay alive (ironic, considering governments encourage us to buy cars, which are dangerous), go live in London (which is dangerous
and a target) then undergo DWP tests to find out if you’re fit for work (which means you’re fucked). Gillian McKeith has been there to tell us to eat more fibre
and Mr Motivator showed us that, if you exercised daily, your dick could look as terrifying as his did in Lycra.
Back then, whoever was saying all this was sort of, monitored; filtered by social agreement. No one really listened to Gillian McKeith because her obsession with
how quickly a person could get faeces to leave their body was a bit disturbing, to say the least. Everyone kind of agreed that it was a taboo too far. Mr Motivator only
got the chance to nag people who were slumped in front of the television at stupid o'clock in the morning. Essentially, he screamed at anyone enjoying their tea and toast with a hangover (and
the inevitable self-loathing associated with it). That was because all the people with get-up-and-go had, indeed, already got-up-and-gone, leaving Mr M's audience a load of slobs to annoy with his
chirpiness. Meanwhile, any advice given out by the government was usually buried in a Daily Mail fluff piece and instantly filed as advice for others by the entire
UK population. That’s because Daily Mail readers don't need advice; their opinions are already fully-formed and entirely correct, regardless of any contradictory
facts or underlying racism.
These days things are very different in the world of the wellness guru. Thanks to the freedom of the internet, many people now have the opportunity to share their wellness wisdom with the
world. And this would be great, if any of them had the training, experience or sense required when giving out their apparently random advice on nutrition, exercise and the like.
Your typical wellness blogger is generally the photogenic type; the sort of person you assume is a model. That’s until they turn up grinning a brilliant white
smile, holding a plate of green crap for us to behold in their latest smug selfie. They’ll be painfully thin and keen to perpetuate the myth that thin equals
healthy. They’ll drag everyone whimpering toward a diet that leaves you listless, melancholy and shitting constantly. They may well be blonde and will probably be wearing sports gear
for some obscure reason. They will, most likely, take a multitude of supplements to offset the absence of important vitamins and minerals in the stuff they eat, so focussed will they be
on avoiding calories. They will probably feel at home at a gym. They are, in short, the kind of pricks you really don’t want to listen to. And yet, many do.
If it’s true that, come Friday night, these people restrict themselves to fruit and macro-biotic yoghurt before meditating, you have to question if they are indeed human, or just lying.
Why aren’t they drinking to wash away the filth of another week brimming with disappointment and horror, just like the rest of us? Perhaps they are indeed drinking, some kind of
homemade kale wine, far away from the camera (they are British, after all).
That being the case, how are they dealing with the resultant hangover? Muesli is only of limited use the morning after a prolonged bender for your post-boozing unwellness, HDUK
recommends fried products in excessive proportions. Half a grapefruit is never going to display the same restorative effects as a tub of leftover Chinese. If they aren’t doing drugs,
why aren’t they doing drugs? Shouldn’t they understand the physiological effects of controlled substances, to be a fully rounded wellness peddler? Can they really be engaged with
the real world? It’s a madness that such people are listened to online when, face-to-face, you’d scoff at their deathly pallor, the constant running to the toilet and, on their return,
the sadness evident behind their eyes, masked with perhaps a little soft-focus sanctimony.
Most people are dubious but begrudgingly accepting when a doctor gives them health advice, even if they fail to do anything about it and just go straight back on the Special Brew
and kebabs. They respect such guidance, it’s information from the mouth of someone who has trained for perhaps 10 to 14 years in the field, becoming an expert in keeping people
alive. A wellness blogger just needs to be able to afford an internet connection, hide the fact they’re malnourished, adopt an authoritative tone and keep the bullshit coming (in more
ways than one). Don’t be fooled everyone – heed the words of Archibald Scamp, HDUK’s long-running lifestyle expert and fully qualified unwellness guru, and have a fucking cake.
It’ll make you feel better.
Twitter: @unwellnessguru 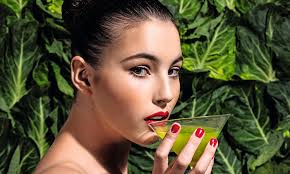