OBITUARIES
with AJ Kirby
Home Defence UK
A Symptom of a Greater Malaise
Rest In Peace Chris Moyles!
Self-Proclaimed Saviour Of Radio 1 Now Resides With Actual Lord And Saviour Following Horrible Death
ALL LIFESTYLE:
Roly-poly Chris Moyles, the self-styled loudmouth from Leeds, has died in suspicious
circumstances, aged 43. The bloated body of the disk-jockey, who once proclaimed himself
'the Saviour of Radio One', was discovered in the bed chamber of his floating palace. He
appears to have died from asphyxiation, possibly as a result of a large chain being dragged
around his neck. The chain, which some commentators have speculated was used to keep his dancing monkey Comedy Dave on a

tight leash, may have lacerated the Moylester's vocal chords prior to choking him to death. Moyles

especially would have enjoyed the irony.

Chris Moyles' path to the top of the radio tree had been a steep one. Stepping up from Dj-ing at local

clothes store 'The Hutt', his honeyed voice quickly took him through the ranks at the nation's second

daughter, Michael, becoming, in effect, master of all he surveyed.

He built an impressive team of lackeys around him, including bald newshound
Dom, dubious comic Comedy Dave, and the Bounty Hunter Boba Fett. Yet it was Fett's inclusion in the
team which caused the first real controversy in Moyles' career, after Fett was accused of freezing Moyles'
breakfast rival, Terry Wogan in carbon. Moyles always strongly denied the sculpture on his wall was
Wogan, however.

Moyles and miles out of touch

As Moyles became more and more bloated with power, he began to think of himself as

untouchable. And his methods grew increasingly bizarre. One day, he devoted a whole show to

moaning about not being paid, something which was seen as completely out of touch with his

audience, who at the time were in the midst of the century's first great depression.

One Radio One colleague, Gerrymander Kidslobber, said: “His rise was dramatic. He added

billions to the listening figures, and to his bank account. But what goes up must come down,

it's an elemental law of physics.”
Indeed, and Moyles was accused of becoming increasingly desperate in his attempts to hike
up his own listening figures (including hiring and installing a number of so-called Sarlacc Pits
in the desert surrounding his floating palace for those who refused to tune to the Radio One
dial).
Another illustration of his Lear-like madness came with his ill-advised attempt to dangle
Comedy Dave (right), who was dressed only in a blanket, off the balcony of his floating palace,
an event which was captured by the world's media and leapt upon by Civil Rights groups.
The 'Tragedy Dave Incident' may now come to be seen as the straw which broke this fat
camel's back. Moyles was put on indefinite hiatus by the Radio One powers that be, Anthony Downwiddakids, 78, and Meryl Streep, 143.
Like that other media mogul, Citizen Kane, Moyles stepped out of the limelight and was to become a virtual hermit, served only by Comedy / Tragedy Dave. Celebrity pal Davina McCall growled, “It were like he disappeared offof tut face of tut earth. Even though we

knew where he were, we couldn't get to him. Six while ten every day – the very times he used to be on tut

radio – I'd wait outside the gates of his palace and try and get in, but even when I employed the translator

droid, C3PO, we couldn't get past tut security.”

Colleague Jo Whiley (left) did get in, and she described the scene of chaos which awaited her inside. “It

was truly horrible. I was expecting him to have at least laid on some goat's cheese because he knew I

was coming, but he hadn't. He just had all these dusty-bin style robots going about with big-massive

barbecues attached to their heads. And his music choice bordered on the obscene. A big blue elephant

on keyboards for Christ's sake.”

Here Whiley had to take a moment to compose herself before continuing.

“And then there was Moyles himself. He'd installed his body on
this huge psychiatrist-style couch right on the edge of his dance floor and was wallowing on
it like a grounded hippo. He was also chonging on something which looked suspiciously like
a bong. Every few minutes he'd clap his little T-Rex hands together, so hard his flesh would
rumble, and the blue elephant would start up with a new tune. And then Comedy / Tragedy

Dave would be wheeled out on his chain, dressed only in a nice

But not as sad as the fate which awaited Moyles' dancing girls should they arouse his displeasure.

Whiley explained: “The dance floor wasn't a dance floor at all. Sometimes when the boogiers didn't move

as effectively as Chris wanted them to, he'd press this big red button on the edge of his psychiatrist's

throne and the whole floor would just disappear. Like it was a trapdoor or something. And when I was

growing up, the common wisdom was, Don't you open that trap door, 'cos there's something down there.”

Something down there there certainly was. And it was the dreaded Rancor, who

was discovered by investigating officers because of the unholy smell which
wafted up from under the tiles. The Rancor, approximately thirty feet tall and bad-ass with it, was in a very
bad condition and may have led to animal cruelty charges had Moyles not been killed by his own chain,
or power.
Moyles is survived by Comedy / Tragedy Dave, his erstwhile son, who remains on the run. The funeral will
take place on Thursday week. Terry Wogan, recently defrosted from his carbon case, is expected to
speak, along with former Leeds United footballer Lee Bowyer. 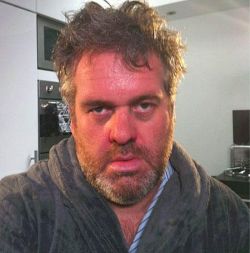 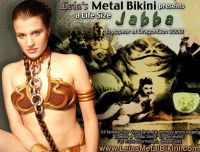