Home Defence UK
A Symptom of a Greater Malaise
LIFESTYLE
with Archibald Scamp
ALL LIFESTYLE:
The 2011 Lib Dem Party Conference Top Ten Things To Do
18/09/11

The Lib Dem conference for 2011 began at 10:00am on Saturday 17th September, promising

to highlight the political achievements of the party.

The conference lasts for five days.
That’s a long time to sit in embarrassed silence.

There will, inevitably, be some ’macho’ posturing.  Macho isn’t really the correct word (referring to Nick Clegg as ‘macho’ would be absurd and

wrong in a whole host of ways) but I’m going to draw attention to the inevitable claim: that the Liberal Democrat party hasn’t spent all their time

since the election doing the political equivalent of opening up every collective orifice to all and sundry, like the most desperate prostitute might

do for the promise of a sullied one-pence coin.  No, lines will be drawn in the sand, only to be scrubbed out in a few weeks time (if that long.

Might be days, or even minutes…), with claims of surrendering to what little opposition is offered.
Such blustering will come from the top and rain down upon party members like a golden shower.  But what can your rank-and-file member do while being urinated on? (only in a metaphorical sense; if this was a Conservative party conference that comment would be entirely literal and I would have to add something about autoerotic asphyxiation and felching)
Here is the Home Defence list of ten helpful suggestions for things the LibDems, or anyone who finds themselves at this party conference through some kind of horrible mistake, could spend their time doing:
1. Go home.  Obviously. If anyone at a political party conference has the sense to do this then the rest of the list becomes pointless.  However, that would involve making a choice and sticking to it.  Zing!
2. Dare to suggest your party show some backbone and maybe stick to those ideals that made it so ineffective in the first place.
A totally futile action, but at least you won’t feel quite so pathetic afterwards.
3. Doodle.  This is a common activity that takes place in any meeting when at least one of the people sat listening becomes
very bored.  Masterworks have been created then sadly lost as people, ashamed at their lack of interest, thrown in the bin what
should have been an agenda but turned into a panoramic view of Paris with the Eiffel Tower at its centre, styled in blue biro ink.
Many nude caricatures of co-workers have been lost in a similar fashion.  Such moments of creation should instead be
heralded as proud achievements.  Wouldn’t it be wonderful to hear someone interrupt Nick Clegg mid-bullshit and present him
with a portrait of himself done in Sharpies on the back of a press release?

4. Imagine you’re watching The Muppet Show.  The presence of Danny Alexander should make this easier.

5. Consider what life would have been like with David Cameron there too.  It’s a great way to relax.

6. Throw faeces at the speakers. Any faeces will do.

7. Weep for the future of our world.
8. Call a fellow party member ‘yellow’ and see if they take it as an insult, compliment, or just a perceptive statement of fact.
9. Decide which proper political party the Liberal Democrats are most like.  This is actually quite challenging.
10. Try to work out what happened to your soul. 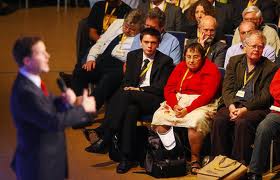 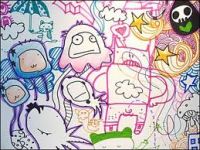