Home Defence UK
A Symptom of a Greater Malaise
ROYAL LIFESTYLES
with Al Likilla
ALL LIFESTYLE:
The Home Defence Guide To The Queen’s Diamond Jubilee!
May 2012

Next month the whole of Great Britain, that most magnificent country there is, will throng the streets;

conscience). Royal watchers, peasants and alcoholics will all take part in violent revelry over a four-day
weekend, getting messed up to celebrate six decades of being ruled over by our Octogenarian Queen; the she-wolf possessor
of intense charisma, secret magical powers and a racist husband.

Generously and sanctimoniously, the unwashed masses have an extra day off work, to think about

monarchy, wizards, elves, dragon-slaying and unicorns. Many events will keep us simple-minded

plebs entertained. So whether you’re a little Englander looking to celebrate this once-in-a-lifetime occasion, or visiting British shores to witness

our quaint and faintly retarded ways first-hand, you’ll be needing the exclusive HDUK guide to all the horseguards, horseplay and horseshit that

are to legally separate before filing for divorce, admitting they “rushed into” last year’s wedding, and the whole event

was basically ill-thought out and should never have happened.

tugged at least twice an hour.

of Luton. Sellers should be aware there is a twenty pound pitch charge, cash only.

only in creating an international incident and have to be flown back the following day, covered in a blanket and hiding from the media like

bet on the gee-gees when no one’s looking.

flowers on Peckham Ice Rink in memory of the latest victims of ice skating-related gang violence.

it all fucking meant something.

protestors from the grounds of St Paul’s cathedral.

Jubilee Tour 2012’ stencilled on the back in an exclusive Royal Family font (designed by Stella McCartney). This highly collectible item of clothing

is available at just £25 a pop, from her new website – findqueenie.com.

rather than ‘holiday’ or ‘doss’.

So much to look forward to there! Your time ruling over us has just flown by ma’am! Gawd bless yer Mrs. Queen, and here’s to the 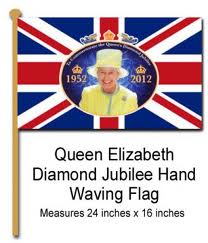