LOCAL NEWS
with Al Likilla
Home Defence UK
A Symptom of a Greater Malaise
Sheepdog Union Up in Paws Over Proposed Replacement by Robots
10/10/14
ALL LOCAL NEWS:
To Swansea University in Wales, where scientists are today celebrating a landmark discovery that promises to demystify the ancient art of canine
sheep-assemblage in an instant. The successful experiments have revealed this act of livestock-herding to be a straightforward process, involving a duo of
mathematical rules, easily duplicated by any automaton. Such machines would then be able to direct and alter the path of up to a hundred wool-bearing
ovines, accomplishing tasks that have previously been the preserve of ‘man’s best friend’ faster and with unprecedented efficiency to revolutionize many
aspects of the farming industry. But not all of those affected by the breakthrough see it as the most positive of developments.
“Times are tough enough for working dogs everywhere as it is” Grumbled Butch Lorry, head of the National Farming Animals’ Union (NFAU). “So when suggestions such as those
appearing in the press raise their heads its particularly unwelcome. The reports seem to be inspired by a new bit of science, and then journalists go on to claim working
sheepdogs across England and Wales will instantly be replaced by some kind of weird, scary robots. Let me tell you now; any such developments will be
resisted by our members at every turn. We shall not hesitate to act, be it through mass action, bark-to-rule, pack rallies or even sheep-napping if things
get really hairy.”
Mr Lorry (left) went on: “I’m no luddite, far from it – I use a number of dairy-based apps every day to monitor cheese prices, milk outputs and the like. But my organisation cannot stand by
and watch unproven technology puts honest, hardworking sheepdogs out of work.”
“I simply don’t see the sense in it.” He mused. “The robots cost a fortune to maintain, they rely on costly ‘experts’ for reprogramming and they can’t go out in the snow or rain in case they go on the fritz. Most importantly, mechanical beings won’t be there to accompany you home, lick your hand and curl up in your lap after a long day working the pens.”
“And what about tradition?” Butch cried. “‘Consider ‘One Man and His Dog’ on the television. This show clearly depicts the indefinable link between master and hound that
distinguishes our profession. Do we, as a nation, really want to lose such a storied history of almost telepathic cooperation, inspired by nothing more than the occasional whistle?
We’ll only end up with another noble profession going the way of the pigeon post or dancing bears. Let the machines take over and what’s next? Robot Guide Dogs for the Blind?
Robot Crufts? Who’s going to pay to watch that? Only other robots. That’s no way to run a dog show.”
Yet many in the wider agricultural community, across the Welsh valleys and beyond, are keen to embrace the onward march of progress, including vacuum cleaner behemoth
Dyson who have applied for EU funding and are looking to manufacture a prototype sheep-dog-robot that isn’t completely terrifying to look at. One of the researchers behind
this coming breakthrough, Dyson tech-head Dr. Cheezus Warbonnet (left), responded to criticisms earlier this week, decrying the sceptics in an
email to HDUK.
“It doesn’t surprise me some would claim there’s a faux-mystical basis to sheepdoggery, a communion of man and beast like none we’ve seen.” Dr Warbonnet’s message begins.
“Actually, my team have discovered that even the most sophisticated dog, while herding, simply closes any gaps in a group of sheep when they’ve dispersed and then drives the flock on
once all gaps have closed. Nothing mysterious about that; such tactics are easily replicated by a non-flesh dog. It isn’t like those canines hand some mystical secret down from one
generation to the next, and if it was a family business well, tough Bonios old chum. That genie’s well and truly out of the bottle.”
“Just imagine,” The techie continued. “We could utilise robots which never lose livestock, can deal with groups of sheep double the
capability of any dog; won’t grow old, deaf or tired. Simply flick a switch and you can store the machine in the barn at the end of a hard day’s dipping. This robot will serve
your family for hundreds of lambing seasons to come – maybe thousands. It truly is the way of the future.”
But as Home Defence was going to press reports were starting to come in of fresh scare stories in the media, apparently
originating from NFAU headquarters, whereby union supporters were claiming to be in possession of proof that the robots
were “prone to malfunction”. They go on to state that the subsequent risk of metal dogs turning against the human race
and “staging a coup against their masters – the farmers” was too high to permit the experiment to continue.
While some have accused the press of scaremongering, this negative view was apparently backed by the dogs’ representative on the Union board. When asked to comment
on the latest developments he gave a highly emotional statement as follows:
“Woof woof – Woof Woof WOOF!” 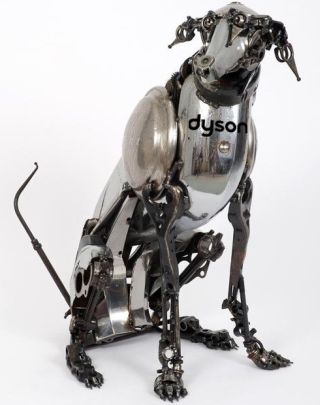