To the leafy suburb of Reigate in Surrey, base of European operations

for the Royal Bank of Hebrew, a multinational that is pioneering a

new method for staff to fulfil their ongoing obligations to the

organisation. Obligations, it now seems, that extend far beyond the moment of departure from this mortal coil.

“We’ve been looking at helping employees balance their work-life time for many years, through innovations

Annunziata Kip told Home Defence when we visited her glass-fronted office on Reigate High Street. “But

too little attention is paid to what I like to call ‘the work-death balance’. For example, one of our Account

Executives recently became deceased at the age of fifty-seven. That’s just selfish. We expect everyone to

toil until sixty-five as an absolute minimum.”
“That bloke still owes this company, big-time.” Mrs. Kip went on threateningly. “That is, if he wants to get a pension for his hysterical widow and newly-fatherless kids. Luckily, here at the Bank of Hebrew, we’re devout and God-fearing and well aware that death is not the end, so we’ve decided cessation of life will be no bar to making this corporation a success. After all, these are difficult times. We need every pair of hands we can get hold of. Even if they aren’t actual, physical, hands anymore.”
Following discussions at the highest levels of management, the RBoH is trialling a system which works
under recognised Christian theology. Within this process, once a human being dies their virtuous soul will
ascend to heaven and be converted into an angelic form, whereupon they spend the rest of eternity at the
right hand of God, occasionally strumming a lyre and generally feeling smug.
Unfortunately this ‘disambiguation’ and subsequent lolling around in paradise, failing to contribute to the
corporate machine, goes directly against the tenets of our post-Credit Crunch society. Here employees
must accept additional duties for no extra remuneration, hear about pay cuts and pension wipe-outs with
a forced smile, and generally just eat shit.
To get around this the RBoH have invested in a special ‘Spirit Link’ to the hereafter, giving former
employees of the bank; those people who may have suffered some kind of fatal accident or
horrendous illness, the ability to ‘log in’ to the corporate network from whatever cloud they’ve been assigned in God’s kingdom. Once connected, they can continue with the work their days used to entail, be that asset management, illicit trading in the financial markets or simply catching up on emails.

“Of course we’ve limited this system to office-related procedures.” The Bank’s Director of Human and Spirit

Resources, Sandra Chod, told a sceptical news media when the plan was announced. “If we allow these

tasks and jabber on at loved ones all day long. The last thing we want is for valuable time to be frittered

away writing: “Death’s not so bad my love, kiss the kids for me and tell them daddy’s doing okay, he’s in

heaven with the angels now… blah blah frigging blah. That crap doesn’t give our shareholders a decent

dividend at the end of the year.”
“Obviously the spirit link isn’t foolproof, and it can be difficult to contact some of our heaven-residing staff at
short notice.” Ms. Chod continued. “There aren’t any mobile phones in heaven for one thing, while our
Lord really ought to upgrade his ADSL line if he wants to be a part of the modern world. I’m trying to set up
a fortnightly séance in one of our meeting rooms to look at ongoing issues with the facilities up there, and
we’re working hard with Saint Peter to ensure our heavenly workers have the same comforts the living
expect in our Reigate office. Still, health and safety within God’s domain really needs to be brought
up to the legislated standard. Someone ought to step in.”
Sandra goes on:

“But the benefits are legion. Staff who've passed away never call in sick, and they have so much more time to toil. I reckon most of them would have got bored and asked to go back to work at some point after they died anyway.”

Indeed, other corporations now intend to copy this scheme with minor tweaks according to the tenets of

their faith. This means the dead could soon find themselves working from other planes of existence

such as Purgatory. Sandra Chod was asked if her bank had ever considered making a pact with Satan in

order to increase productivity still further, but this notion was given short shrift by the Company Director.
“None of our employees are going to hell.” She replied.
But whatever the official line, not everyone is excited about this scheme. Channel 5’s Derek Acorah (right) has
recently picked up on messages from a company Administrator called Clive who had been mauled to death
by a bear while on a recent ice skating holiday in Russia. Acorah reports Clive as saying: “What kind of

Elysian Fields are these? I have to do forty hours a week on the freaking databases even after I’ve popped my

Meanwhile the Archbishop of Canterbury (left) recently quoted from the good book in a sermon, saying; The

shine like the sun in the kingdom of their Father. However, as Rowan Williams noted, that can be hard to

achieve when everyone’s worrying about six-monthly appraisals and meeting their targets.

“The dead are only supposed to hear the Son of God.” The Archbishop told his

congregation. “Not some line manager telling them to ‘up their game’ constantly.”
As of press time, various Archangels were ‘considering their options’ in relation to the scheme, although
privately God was said to be somewhat peeved. Indeed, at one point the deity was overheard to mutter to
himself: “I wish I’d never bloody invented Capitalism in the first place.” 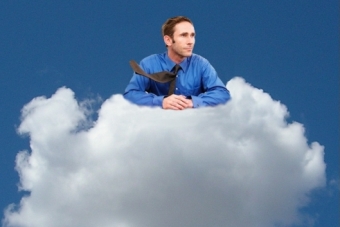 The living touch-base with the hereafter for a special brainstorming session.
Employees ascend to another realm.
That new workplace (Internet connection intermittent).
1