To Bridgend, a county borough in the bleakest part of Wales,

midway between Cardiff and Swansea. Here councillors and

social services have today announced a state of emergency.

Home Defence visited this grey outpost, a township set against the inhospitable Welsh landscape, where we

of her birth last year when she was accepted into a Scottish university and was returning to visit her family.

teenagers, told us. “Bussing the 'at risk' out to places where the suicide rate is below the

national average and they can be watched constantly. The government has been trying to
work out why this is happening ever since it started. I’ve heard all the theories; breakdown of society, lack of
job opportunities, evil social networking sites. That last one’s usually suggested by people who have no idea
what a social networking site is by the way.”
Miss Solendon continued. “Those of us who have lived here for a while are certain it’s a load of rubbish. Quite
simply, Bridgend is the most depressing place on earth. I know, I spent eighteen years here looking for something to do. It rains constantly, everyone’s ugly and miserable and horrible, and there’s simply nothing around. They even shut down the Spar because kids used to hang about outside and frighten the old ladies. Death can’t be any worse than Bridgend, I truly believe that. Those kids I went to school with who committed suicide actually made a rational, informed choice. It’s those who live here for eighty years I can’t understand.”

“In my street we’ve even known the household pets to top themselves.” She

first individuals began to kill themselves back in 2006. Before this crisis the

only notable events in the history of this market town, which has a population of

40,000 and decreasing all the time, was when the River Ogmore occasionally

burst its banks. But that was before the fashion for taking one’s life began to

spread among the district’s younger residents.

‘Bebo’, South Wales Police thought they had a lead at last. Tabloids ran

Town’, ‘Death Valley’, ‘Web of Death’ and ‘Evil Internet Death Fad’. These reports often contained plenty of detail as to how the teenagers and twenty-somethings died, meaning their approach could be easily replicated by others. Then the authorities discovered their whole investigation was a dead end because half of those who died over the two years didn’t even understand computers. However, Wales has continued to block Bebo for precautionary reasons.
The investigation was widened as the death count grew, and soon police found South Wales to be plagued
by mental health problems, an influx of cheap amphetamines that drove the young folk mental, and a 95%
drop-out rate in the area’s schools due to disinterest or ‘terminal listlessness’.
Despite all this, one pioneering social worker decided the solution lay elsewhere.
“We’ve been putting on special coaches to take teenagers out of here every weekend and it seems to
be working.” Head of County Social Services Boaz Okonokos told Home Defence. “We’re part-funded by
‘Bridgend Alternative’, a charity set up to give kids access to nearby towns such as Neath or Barry Island, places where the youngsters can find unfamiliar stimulation such as ‘scenery’, ‘night clubs’ and ‘culture’ to bring them out of their rut. These places provide a respite from the oppressive atmosphere of Bridgend, and they encourage teenagers to participate in activities generally

thought of as ‘fun’. Like going somewhere music is played and having a bit of a dance.”

“But we still need to keep them closely supervised at all times, just in case one drifts away from the

group and jumps under a train, or hangs himself in the pub toilets when it’s time to go back.”

Okonokos continued. “Obviously the administration is very costly, and it’s not a long-term solution.

continue to see clusters of young men and women trying death, in the words of one suicide note,

‘just to see what happens’.”
As Home Defence went to press the Welsh Assembly was due to publish a report listing improvements to the
ambience and consumer potential of Bridgend, citing the recent opening of a new industrial estate, Asda
superstore and three more pound shops on the high street to illustrate their point. This document also defends
the council record, noting that the town contains many first-rate attractions, including the country’s only private
prison and Wales’ Finest Kebab House as voted for by the readers of ‘What Takeaway?’ magazine. They go on
to claim that, once the traffic and parking problems in the centre of Bridgend are fixed, future generations will
enjoy living there much more and likely want to stay alive.

happened upon in the aisles of a really big Tesco on the outskirts of town. When we asked Dai if these

initiatives were going to make a difference to people his age, he told us:

“I have nightmares, it’s horrible. He was my best friend. Only lived three doors away and I found the body.

When I close my eyes I can still see his face. Some days I don’t even get out of bed. Then I think; maybe he

was the lucky one. He got out.”

Dai then left our presence and proceeded towards the checkout. 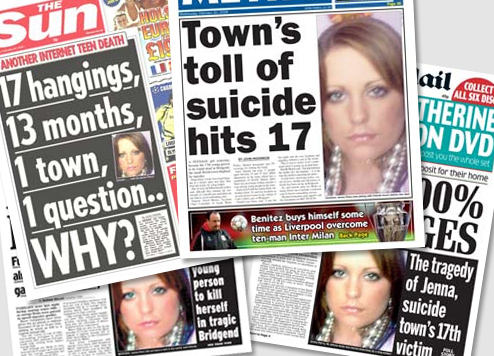 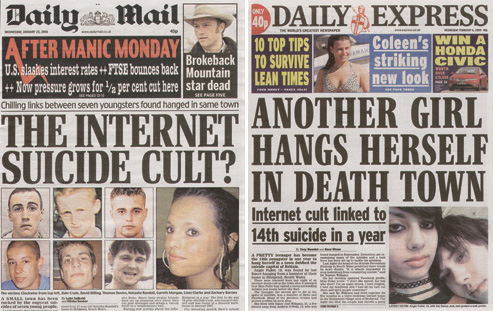 Some of the more balanced reporting on this phenomenon.
Can the good times return?
Some of the many dead.
1