LOCAL NEWS
with Al Likilla
Home Defence UK
A Symptom of a Greater Malaise
Boris Johnson to Make Sure London is “Well and Truly Fracked”
19/08/13
ALL LOCAL NEWS:

The picturesque countryside of rural Britain, from idyllic West Sussex protest camps to the operations

setting up every day in the “desolate” North East. Here, companies involved in hydraulic fracturing, or

grants and alpha male encouragement from those who live a long way away, looking into the extraction

of previously-inaccessible hydrocarbons from deep in the ground.

Meanwhile, demonstrations by locals who don’t like the idea of pollution and tremors spoiling nearby
areas of outstanding natural beauty have been eased by the Prime Minister. Earlier this month ‘Diddy’ David Cameron (left) told

them condescendingly: “if you really understood this process you’d be in favour of it,

you silly billies”. The P.M. then went on to assert that “if we frack like we’ve never

fracked before, your energy bills might get close to where they’d be if the industry

weren’t privatised. Although I can’t guarantee anything”.

Earlier this week, critics claimed the government were only interested in ‘fracking with’

Norton). However, this argument was dealt a blow by the intervention of author,

Johnson. Indeed, Bojo came out with the following statement, apropos of nothing, during a visit to Streatham Ice Rink in the wake of a recent gang shooting.
“I think we need to widen the scope to include the entirety of this great city of ours. After all, everyone loves a good frack!” The fun-loving
Mayor joshed in a winning non sequitur as, all around him, the families of victims of violence looked perplexed. “To cope with Britain’s
forthcoming energy crisis, I’ve suddenly decided that extracting shale gas from the earth is a much better solution than unsightly wind
turbines, or the environmentalist solution of burning rubbish, which isn’t going to make any money for anyone, and can only generate
an unsightly pong or ‘whiff-whaff’.”

confirming my unqualified support for any company that wants to frack this city blind.

My office will hand over all our roads, residential areas and parks to any multinational that

“I don’t know what all the fuss is about, really I don’t.” Johnson clarified later at the Groucho Club, after Londoners

expressed shock and outrage at his plans. “They won’t be doing it near my home, or the mansions of anyone I know, so

what’s the problem? It’s only poor people in council accommodation I’m encouraging to get totally fracked.”
This process of ‘hydraulic fracturing’ involves splitting rocks from deep in the earth by pumping in pressurized water mixed with
sand and chemicals. Once the concoction has been injected into areas of sediment it releases sweet, sweet gas and gorgeous
petrol worth many pounds. Such forms of non-renewable energy can then be spunked up the wall in a big polluting orgasm,
like all the other hydrocarbons human beings have ever enjoyed.
“We’re simply not going to stand for this.” Audacity Traipse, founder of London’s Angry Female Parents Against Fracking
(LAFPAF) told HDUK when we found her, glued to a drilling rig near Battersea Park. “We can see through the Conservatives
and their urge to frack everyone up. There’s an energy meltdown coming so they’ve started to panic, which is why they’re

turning to big piles of frack like this one.”

At this point, self-styled ‘bad motherfracker’ Mrs Traipse gestured at the surrounding site before continuing. “Aside from the soaring bills that

come with energy companies operating privatised monopolies like cartels, we now face rationed electricity use and blackouts for years to

come. Rather than ensure the likes of British Gas and Scottish Power work together to invest in nationwide infrastructure and counteract such

shortages, the coalition and Boris have started a ‘frack-rush’ instead, letting organisations profiteer in the short-term by digging up our

“Frack, frack, frack – that’s all I ever hear from politicians nowadays.” Mrs Traipse asserted as the police moved in to arrest her. “Won’t

someone think of my children?”

In spite of the oft-reported downsides, which include the migration of chemicals into the water supply, a
reduction in air quality and the possibility that buildings above the fracking site will collapse into a sinkhole, City Hall has already
put the wheels in motion, with compulsory purchase orders for thousands of houses rendered unliveable by the process.
Additionally, several green areas of the inner city, including Clapham Common and Regents’ Park, have been turned into
construction sites overnight.
“What’s a little earthquake or two compared with getting Londoners’ gas bills down by as much as a few pence annually?” An
unrepentant Johnson maintained at Mayor’s Question Time earlier, after being warmed up with questions about his ‘Bikram Bus’
and plans for a new ‘hub’ airport which would reduce noise pollution for rich people near Heathrow. “Everyone needs to grow up.
Get real and grow up. But mostly grow up. If these lovely frackers accidentally render a few tower blocks unstable, we can always house the residents in tents or a

disused prison until the earth’s crust settles down.”

“What do I care anyway?” Boris asked rhetorically, shortly before walking out. “I’m not running for a third term. I can do whatever

Later, Mr Johnson would qualify his comments by confirming that he actually loved poor people, and would do whatever he

could to protect them from induced seismic activity. The Mayor then announced that any funding shortfall in the fracking of

London’s inner city boroughs would be met by the Catholic Church, who will be supporting this business enterprise as part 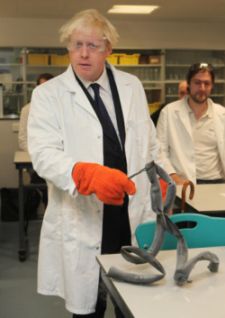 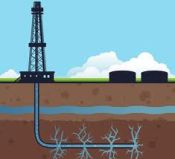 The Mayor of London investigates the truth in the science around fracking.
1