LOCAL NEWS
with AL Likilla
Home Defence UK
A Symptom of a Greater Malaise
ALL LOCAL NEWS:
Black Cab Drivers Protest Against 21st Century
08/04/16
To a gridlocked central London where, earlier this afternoon, eight thousand taxi drivers once again
brought Piccadilly Circus and the surrounding area to a standstill. These men of integrity and honour
succeeded in clogging the city streets while honking their horns, hoping to draw attention to the latest
threat to their livelihoods, a development that has come through the ongoing process of technological
evolution.
“This kind of progress is a threat to our income.” Gruff East Ender Newsie Wanger (left), a working cabbie for more than thirty years, told Home Defence. “These so-called ‘Apps’ are
stealing our fares. I’m not saying we should receive special treatment, but clearly we should. Me and them other blokes are a big part of London’s economy and the tourists love us.
There’s nothing better than getting splashed by rain when you try to hail a black cab, then sitting behind a driver who screams obscenities at rickshaw operators for the first part of your
journey. After that you’ll be subject to an aggressive stream of invective about traffic light sequencing, roadworks, bloody ‘Cycle SuperHighways’ and Crossrail. Visitors to this great
city love our eccentric ways, even if some of them don’t speak English too well or understand my accent. It’s an authentically uncomfortable
experience.”
“What the government has to do to keep us happy is very simple,” Mr Wanger yelled, manoeuvring his cab to block off an ambulance that
was trying to get through to someone who had fallen in Trafalgar Square. “Simply turn back the Uber tide and remove any kind of
competition from the streets and we’ll be happy. These proud men you see around me emitting guttural noise or shouting unintelligibly, they
aren’t Luddites. We just want all technological advances from the last decade to be reversed. Is that too much to ask?”
This ‘go-slow’ turned out to be the largest protest to hit central London since last month. Back then the roads were also blocked by thousands of cabs; protesting against
Transport for London’s willingness to grant licences for Private Hire cars. That was very much about fearless vigilantes taking a stand for feminism when they heard a sexual
assault was committed in a minicab once, and definitely nothing to do with broad smears and derogatory generalisations to help maintain their monopoly.
Today’s blockade was very different, with members of trade unions DIS-UNITE and the UCNG (United Cabbies Nostalgia Group) ringing in to Nick Ferrari’s LBC Breakfast
Show to talk up their proud tradition of dissent. Many told the listeners their forefathers had blockaded London Bridge with horses and carts, protesting against the Internal
Combustion Engine as long ago as the 1890s. Others went on to decry taxi-finding phone application Uber, that innovation which has led to a fall in their profits of around
30% recently. The semen complained Uber was the biggest threat to their way of life since “them EU regulations what stopped us spewing pollution everywhere” and
pointed out that the App’s proliferation meant learning ‘The Knowledge’, a series of exams to prove there is a complete mental map of London in your head, was “fucking
pointless”.
Ferrari (left) then cut in on one sweary caller to ask whether it was sensible to oppose a ‘game-changer’ such as this, one the
public clearly loves. To howls of protest on the line, the host said it seemed to him that Uber had changed the relationship between
user and ‘service provider’ for the better. In response the taxi driver spluttered and began shouting. He said it was ridiculous for drivers and fares to review each other like
‘common sex workers’, rather than the passengers simply putting up with outlandish opinions then shamefacedly paying before shuffling off in embarrassment “like it’s always
been”.
After today’s ‘stay still’ caused maximum disruption to vital services and businesses throughout central London, HDUK caught up with cabbie Newsie Wanger to find out about
future protests.
“After we put that damn stupid Uber back in its box once and for all, me and these other lads are going to take a vote among ourselves.” Wanger asserted. “If that goes well I think
we’ll move on to other things we don’t like about the times. Blu-Ray for instance, because let’s be honest, it isn’t any different to DVD and I prefer video tapes because they’re
easier to rewind. Then there’s bloody social media, digital radio, hippy crack…. Something needs to be done about gentrification and the free movement of people too, and we’re just
the kind of middle-aged throwbacks what can get results!”
As Home Defence was going to press unconfirmed reports were coming in that the cabbies had continued their crusade against the future, with groups of gruff, pock-marked men
wielding placards outside Downing Street, firebombing a Cheshire factory said to be developing jetpacks for personal use and occupying Manchester University. Here a tip-load of
cabbies have ousted research scientists from the campus laboratory, a place widely believed to lead the world in developing teleportation technology. They are currently staging a
sit-in while singing: “We shall never, never, never…. accept the way the world is going. 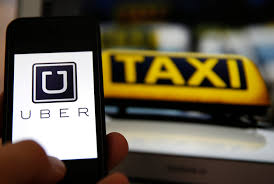 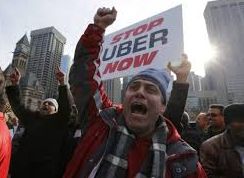 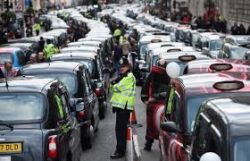