The latest round of cost-cutting measures were today

unleashed by Diddy David Cameron and his golem

Cleggy from Last of the Summer Wine, at a hastily

Puffin-faced Cameron could scarcely have looked more pleased with himself as he waffled through a cream cake, leaving Cleggy, from his on-stage bathtub, to explain the measures in full to the five people who hold the fate of the country in their hands, Duncan Bannatyne, James Caan, Theo Paphitis, Peter Jones, and an actual dragon, the snarling Deborah Meaden.

Cleggy started his pitch confidently, but soon the pressure in the Den started to tell. What

started as a lone bead of sweat trickling down his traitor forehead soon became a waterfall. His

after Diddy David had spoken.

“What we are announcing today,” snivelled Cleggy, careful not to rile the assembled Dragons, “is

force to be reckoned with, somewhere around 2121. And because we're masking these swathing

cuts under our banner of Big Society, we might just get away with it.”

Duncan Bannatyne was heard to mutter: “ridiculous.”
Theo Paphitis interrupted everyone else by shouting something about his “kid's inheritance.”
James Caan calmly steepled his fingers.
Peter Jones pulled up his trouser leg a little, to reveal Wassily Kandinsky designed socks.
Deborah Meaden belched fire, and then ordered poor Cleggy to get on with it.

To a chorus of sniggers from the other Dragons, Clegg went on to drill down into the finances of the
UK Plc. “The first of my measures will be to further cut funding to the councils,” he began. “These
black holes have for too long sucked money from our pockets, effectively stealing from us, and so,
now we've sacked each and every council worker, we propose to turn the council buildings – the town
halls and such – into massive grain silos for when the real hard times come.”
Peter Jones leaned forward in his seat. “Tell me more,” he smarmed.

Deborah Meaden picked at one of her jagged teeth with a sharp claw.  A previous contestant's

flesh appeared to be stuck there, bothering her.

“If you'll let me continue,” said Cleggy, evidently getting into his stride, relaxing into the

presentation, “I'd like to move on to the second part of our proposition. The one with real teeth.”

He grinned, showing those student-tricking white plates of his. “You'll like this one.”
“Ridiculous,” gurned Bannatyne.
Cleggy manfully ignored the drunken gym-mogul and pressed on. Relentlessly. “You may have
noted that as well as all council staff, we have cost-cutted police, hospital workers, and security
agents out of the equation too. This has not been an oversight on our part. Far from it, in fact. You
see, we have a ready made replacement waiting in the wings. A highly-trained special force which
will act as a kind of makeshift security / defence / medical team. Kinda like the army would in a
martial rule situation.”
“Ridiculous,” sneered Bannatyne.
Someone else told him to get on with it, but your reporter Evan Davis couldn't tell who because
his lazy eye was playing up.

Cleggy continued, breathlessly now, his face an ocean of sweat: “The Boy Scouts,” he

whispered. “The Boy Scouts will ride to our rescue. They have cooking and first aid badges.

Diddy David had seen enough. He finished his cream cake, licked each and every one of his

chubby fingers, and then climbed back to his feet. Someone brought him a stool so he could

reach the microphone.
“The figures work,” he said. “Look into my eyes... When I produced the movies Titanic and
Avatar, people thought the figures wouldn't work, but I have proved myself time and time again.
These are the highest grossing movies in the world ever, and they are all round family fun to
boot. And I have this to say to critics who say the Scouts aren't experienced, or savvy enough,
to cope with the new responsibilities...” He cleared his throat, put on a newer, even more
conniving voice: “This is the dawn of a new age. But we are carrying forward the lessons from
an older age. In Silence of the Lambs, they sent in Jodie Foster, a trainee, to carry out the
extensive interviews with the serial killster Hannibal Lecter. And she got results, didn't she?”
He raised himself up to his full four-foot height and prepared to finish the hapless Cleggy's speech for him. But Deborah Meaden had other ideas. She began to emit a haunting, rumbling sound from deep within her belly. It was as though she were cooking-up some snarling put-down from deep within the bowels of hell. Her reptilian yellow eyes were fiery with rage. Cleggy pushed his bathtub off

the stage. It was revealed to have wheels, so he trundled down the central aisle and away from Diddy

David. Diddy David however, had seen nothing.

“I'M OUT!” bellowed Meaden, her roar accompanied by a Guy

Fawkes night of flame which engulfed the stage.

“Unfortunately... regretfully, I'm out too,” said James Caan, ever

so politely.
“Ridiculous,” muttered Bannatyne, as flames started to lick the roof, as beams started to cave in,
as the collection of stores the Con-Dems had been ferreting away for when the emergency really
started to kick in, started to cook in their tins.
UK Plc hadn't even managed to get to the third part of their proposal. 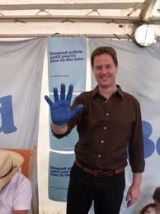 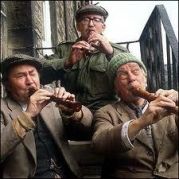 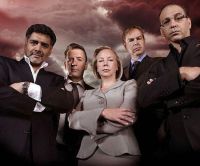 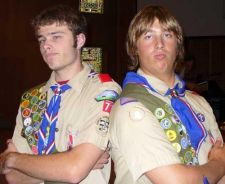 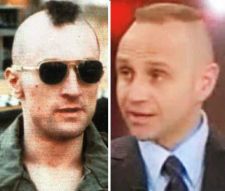 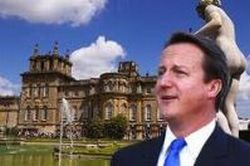