To the capital city of England, one of the world’s most important financial centres

where, through a series of implausible events, a man who has been on the telly a

few times and is most easily recognized by his absurd, strawlike hair, recently

influential in the country, almost entirely by mistake.

new Mayor to wear. “Who expected this? Not me, um… four years, blimey. You know, I only ran because

Dykey [Greg Dyke] said no. Next thing, I’m responsible for a multi-billion pound budget and expected to

sort out the 2012 Olympics. I mean, cripes.”
Later the man with silly hair sent a follow up email to qualify his comments.

“Having spoken to my people, I would like to categorically state how much I look forward to the hard work coming in my term. Even the bits where I get shot down by hostile members of the London Assembly, and they don’t laugh when my only response to the big issues is to make an unfunny quip, usually in Latin. That said, the amount of
pussy throwing itself my way since I’ve become Mayor is incredible. I’m even more
of a poon-magnet than before, but don’t quote me on that.”
The man riding a bicycle is married to his long-suffering second wife, Marina
Wheeler, and the pair have four children; Milo Arthur, Theodore Apollo, Cassia
Peaches and Lara Lettice, some of whom also have silly hair. The man lists his
likes as “food, bicycles, Routemaster buses, Old Etonians and ‘the ladies’”
while dislikes include combs, bendy buses, "people who confuse me", trade
unions, and boiled eggs. In the past the man with silly hair has been dismissed
as a bigoted idiot for likening gay marriage to exchanging vows with a dog,
claiming Papua New Guinea is a hotbed of cannibalism, and forgetting the
name of his own book while he was writing it.
Such a figure could only be elected through a sometimes incredible series of related flukes and, in this case, they included an unpopular Labour government impacting on the incumbent, the tendency of the British public to vote for celebrities because they’ve seen them on TV, and a general sense that his post is a bit comedy. After he took office in May many political commentators held their breath to see what the silly-haired individual would do next, and they weren’t to be disappointed.

unworkable, cancelled the cheap oil deal with Venezuela which subsidized bus travel for eighty thousand of the

is likely to set a pattern for the next forty-seven months of ineptitude and hopelessness, a situation that is only

to be expected if you pick a random bloke who has no real understanding of politics, London, or the modern

world in general, for high office.”
“But perhaps the most striking illustration of the new Mayor’s arbitrary antics came
with the banning of alcohol on public transport during his first days.” Archie continued.
“Anyone in touch with London’s booze-sodden reality would know this could only
open the door for final night piss-up antics that were likely to endanger the transport
staff on duty. Not this man. When we tried to ask him about the drunken carnage
he’d unwittingly initiated the Mayor just got on his bike and cycled off.”
Indeed, the night of 31st May 2008 saw out of control revelry across the network,
as a final evening of drinking was embraced by thousands on a ‘tube crawl’ around
the Circle Line, travellers armed only with the contents of several Off Licences and
a funnel. Before the evening was out this scene had come to be one of almost terrorist
level devastation with multiple fights, assaults on employees, hospitalizations, various
stations having to be closed, and commuters caught up in the party forced to swim home through an ocean of vomit.

When asked about his apparent failure to comprehend the consequences of this, his

first major policy, the man with silly hair muttered under his breath.

“Er, well… to be fair to me, it can be very, very difficult… we have the best

people here and you could, um… I’ll have to go and check. I mean, crikey… for my,

for my, for my… sorry. My office is fantastic you know.”

The man with silly hair then shrugged his shoulders and walked out, leaving political commentators to
wonder if his appointment will be seen as a harbinger for times when memorable-looking men known through
television will regularly be elected to positions of prominence. Indeed, some experts predict that before this
decade is out, comedian Bill Bailey could be installed as Prime Minister, with boogie-woogie piano maestro
Jools Holland bowing to public demand as he is crowned the next King of England. 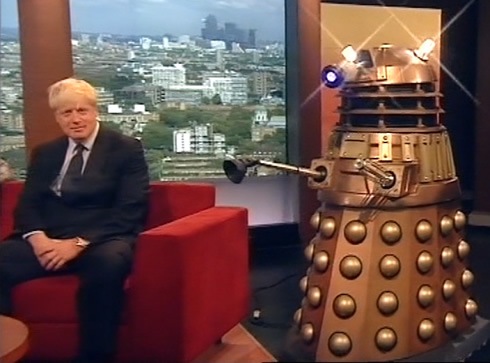 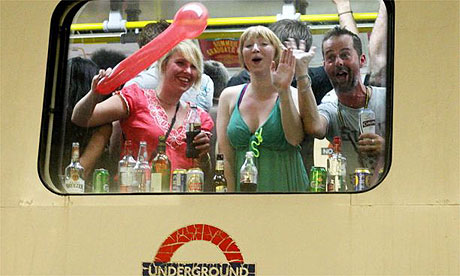 The man with silly hair meets one of his new constituents.
Revellers on the Circle Line wave an inflatable penis in celebration.
The Mayor, a veritable "poon-magnet."
1