AROUND THE ELECTORAL LANDSCAPE - LOCAL NEWS
with Al Likilla
Home Defence UK
A Symptom of a Greater Malaise
ALL LOCAL NEWS:
UKIP Announce Raft of Progressive Pre-Election
Policies
25/04/15
To the UKIP manifesto launch in the shopping centre town of Thurrock, Essex. Home Defence arrived in this hotbed of unrestrained bigotry to
report on the much-delayed United Kingdom Independence Party's policy document, one that has surprised many onlookers with its progressive
nature.
“We’re a 21st century party, don’t look so shocked.” Party leader and human mouthflap Nigel Farage told a gathering of Daily Express reporters
and their senescent supporters, 30% of whom suffered from severe joint pain on the day. “I’ll hold my hands up - our previous manifesto was written during an evening
when I consumed a furlong of ale then scribbled the first thing that came into my head on a load of beermats. That’s why it was mainly about taxi drivers’ clothes and Eastern Europeans. Since then I’ve learned loads of                                                     stuff, about the economy and environment and all that, so I’ll hand you over to Suzanne who will take everyone through this, step by step, while I go and smoke a fag.”
Deputy chairman and extremely sober lady Suzanne Evans (left with Nige) then proceeded to lay out the key elements of the manifesto which, much to the surprise of the assembled
gathering, didn’t focus on ‘Bulgarians in limousines’ or ending life-saving aid to ‘bongo-bongo land’. In fact, the UKIP policy document sets out four ‘pillars’ to make Britain great
again. For the economy, a Keynesian approach to stimulus and deficit reduction; regarding energy, funding for innovative
renewables; thirdly an emphasis on nationalising everything from railways to the NHS and finally ‘the future’. This last strand
comprises a whole raft of ventures to assist the under-40s, from training programmes to a Childcare fund to the abolition of
tuition fees across higher education.
When the announcement was over and Farage, who once got so blackout drunk he was hit by a car in Orpington and almost had
to have a leg amputated, returned looking ‘refreshed’ he was confronted by stony faces and much muttering. UKIP supporters and even some of their candidates for
parliament were wondering at the absence of prejudice or nostalgia in the party manifesto. Where was the unlimited defence spending to make Britain the world’s
leading military power once more? What about lower taxes? Or ending globalisation for goodness sakes?
“I can’t find the bit about the European Union being responsible for traffic snarl-ups. Where are the anti-gay beliefs? What about negroids?” Shocked UKIP candidate
for Basildon, Albert Racialslur, asked HDUK as the event was wrapping up. “I expected a section that explains how we’ll prevent foreigners getting medical treatment for
hay fever or gout. Instead there’s reams on running the country responsibly and within a limited budget. I don’t like it – I’m confused and frightened, even more so than
usual. That’s the modern world for you”.
Indeed, this hall of blue-rinsed, xenophobic retirees were left too agog even to boo as the party leadership left on the campaign bus, heading for an inner city Primary School and
a succession of multicultural photo ops. The dissension continued to spread as the announcement sank in and the hard of hearing had the key
elements shouted repeatedly into their lugholes until they understood.
“He didn’t once blame migrants for Caucasian kids playing indoors, or the long queues at cashpoints.” Grandmother of several Joyce Grundies
grumbled. “I expected them to guarantee a bobby on every street corner to stop teenage ethnics ‘hanging about’ now the evenings are lighter, but
there was nothing. I might as well be supporting the bloody Liberal Democrats.”
Luckily UKIP MEP Roger Helmer (right) was on hand to reassure these distressed elderly gentlefolk, telling his party faithful: “I don’t know what that is or where they got it from, but this
document isn’t our manifesto, I hadn’t heard a word of it until now. This must be some kind of clerical error.” Helmer adding, by way of mitigation: “It’s difficult to get a coherent manifesto
signed off when your party leader’s permanently pissed.” 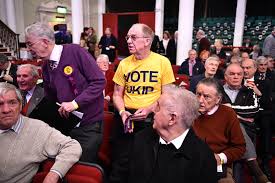 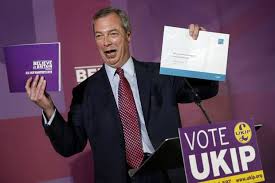