INTERNET EXPLORATION
with Bert Infiltration
Home Defence UK
A Symptom of a Greater Malaise
Web Digest
26/01/04
Our journey through the Interweb begins, appropriately, in America, where most of the 'strange but oddly compelling' sites originate. Found Magazine is an impressive collection of photos, notes and audio clips 'found' by the contributors (presumably in the street as they don't go into this in too much detail, I'm sure it's not theft). Content includes "1973 Tijuana" and "The War on Terror" below, which neatly summarise the site's overall content, brief glimpses into people's lives with more than a hint of voyeurism...

The internet has grown ridiculously rapidly over the past few years, and much of this is due to its three main subjects, comedy, porn and chat. Although Found Magazine is amusing (possibly only for half an hour or so), try visiting the homepage of Michael Moore for something a little more weighty. It's a good dose of political satire from the man who brought you the sublime 'Bowling For Columbine', as well as the bestselling 'Dude, Where's My Country?' and 'Stupid White Men'. Although Moore focuses on the American political system, which makes our own scene look like a democratic utopia, his regular blog entries and e-mail newsletters should make for essential reading throughout 2004 as the US hurtles towards another Presidential election. I just hope they manage to count the votes properly this time.
Flitting back to the weird and wonderful, no dedicated webcrawler's life is complete without a good source of odd news stories. The best I've found is on Ananova which dedicates much of the site to searching out the best of the world's bizarre happenings. Broken down by genre ('Eccentrics', 'Quirky Gaffes' and 'Strange Crime' amongst others) it's well worth a gander. On the day I wrote this piece, the Pope was hosting a breakdancing display at the Vatican (see right), a Russian orthodox church rejected a plea from one of its members to call Chess "the work of the devil" (depends who you play I suppose), and a poor Canadian web freak was forced to surrender his eponymous domain name (www.mikerowsoft.com) by the gigantic meanies in Silicon Valley who cited infringement of copyright. 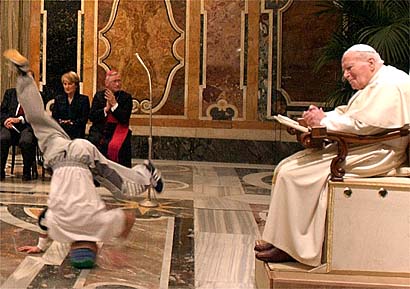 Finally, fresh sightings of obviously-dead 'King of Rock 'n Roll' Elvis Presley continue apace. Pop along to Dead Elvis for regular updates, such as the following:
Place: Stanton, Kentucky
Name: Anna Marie Rogers
When: 4/03/03
Circumstance: He lives in the handicap apartments. He was riding on his motorized scooter singing "you ain't nothing but a hound dog". He got ahead of himself and came close to running out in front of the senior citizens van. My mother screamed, "Please don't hit my king!" He still thanks her, to this day.
Place: Surrey, England
Name: arbuthnought
When: 24/3/03
Circumstance: we was at the supermarket when we noticed a cadillac parked in the disabled slot and when wes was picking out potatoes we saw elvis with a trolley of fish fingers, everyone knew it was him.
And who could argue with that? Until next time, this is Bert Infiltration urging you to surf safe.
ALL LINKS:
1