THE ELECTORAL SWEATS
with Zeus Maode
Home Defence UK
A Symptom of a Greater Malaise
ALL LINKS:
Britain's Got Blair Hands - A Culture Sweats 2015 Election Special
04/05/15
Hipolitics is the reboot. Not a Brand, not a beard in sight - not in this game. Just lecterns, big fancy lecterns with LEDs, to like, stand behind
and debate. Lots of them, seven even. How many? Seven. That’s four more people debating than normal. The league got bigger. TV deals.
Thanks TV.
So, this, the first episode of Game of Lecterns, was, it seems a lifetime ago. A long, painful, lifetime ago. At first glance, we see that the
daytime TV quiz show design team has finally got some evening work. It’s ‘Britain’s Got Blair Hands’. This is the one we’ve been waiting for.
Peter Dickson should be barking this at us. Why didn’t we get Dickson?
I joined the rest of the country that evening, at home. Perched myself
on my upcycled, hirsute recliner. Grabbed my pipe, slippers and lounge
jacket. Sat back and watched for sixteen straight minutes.
Fortitude was on Atlantic in a bit you see - priorities.
Let’s skip through, like slam poets.
Oh, be done.
Register to Vo-Teh.
Then don’t bother
To Vo-Teh
In the end.
Forget? Gamble? Drink?
Whatever.
Move on.
So...
From the left:
The Walking Clegg. SDLP
Anamatron, Nicola Sturgeon. SNP
Nicola Samwise Gangee of Hobbiton. Green Party
Nick Park’s Ed Milliband. Labour
The visitor: Nigel Farage. UKIP
A lady from Wales. Plaid Cymru
The Dark Angel of Baphomet. Conservative
Julie Etchingham presides.
Everyone is white.
Question: 1: Can you confirm Fortitude is on the other side at 9pm?
The Baphomet screeches first. Black wings extending upward behind him. He eyes The Walking Clegg and then the audience, then The Walking Clegg again. He seems to be
asking himself ‘Why?’. His tongues make political noises.
The Walking Clegg mumbles something about never doing the bloody washing up and eyes the Baphomet back, wounded.
The Blair Hands on these two are pretty solid. I’ve been watching them instead of listening. Which, presumably, is the point.
Sturgeon butts in rudely: “heh Buck. Mini mini mini, mini mini”. It leans forward and pulls a funny face, like it’s evacuating itself. It seems to think it’s in ‘bullish and arrogant’ mode.
Farage opens his mouth. Noise comes out. Then it stops.
Ed Milliband, a difficult man to look at, attempts to say ‘sufferin' succotash’; fails. Some dribble falls off the eastern edge of his face.
Sturgeon butts in rudely once more: “heh Buck, mini mini. Mini mini”. It points at the lectern top this time while making the funny face.
Nicola Sam-wise Gangee says she can carry the country, even if Mr Frodo can’t. No one believes her.
The Welsh woman stands nearby.
Farage says “Aids migrants”, very loudly. Everyone hears the words and it’s all over for him. Nigel heads off down the tunnel.
We’ve lost Ethingham, lost her to dreams of Paxman in a hot bath.
The Dark Angel circles the audience, up among the rafters and lights of the studio ceiling. In its talons, a small child’s limp body is briefly visible.
The Walking Clegg appears to be weeping. He’s in the audience now, looking for his mum.
Milliband’s face has finally realized none of its constituent parts belong together, let alone badly-placed across the incongruous surface of his head. They leave now, piece by
piece. Just a gurning champion remains.
Sturgeon and the Hobbit are chatting among themselves. Bless.
It’s all gone very Gotham, very quickly.
That’s your sixteen minutes.
Now go vote. 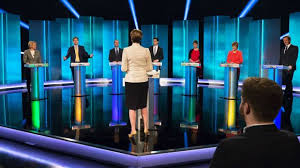 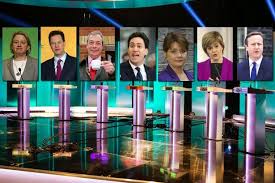