HDUK GUEST COLUMNISTS
as told to Al Likilla
Home Defence UK
A Symptom of a Greater Malaise
How I Brought Hope to Syria’s Suffering by BASHAR ASSAD
ALL LINKS:

Hello my many, many friends out there, Bashar here once again, your much-loved Syrian leader, notable online

personality and friend of the stars. I hope you all feel chirpy like I fucking do now summer is finally arrived. As

everything she own “out of style”.

That woman need putting in her place, and good! Sadly she too strong to slap and besides, I am in the good

fucking mood for once! You may not have heard my friends, but the country I rule with stern glove in clenched

fist has finally done it! The rebel action is no more! And I do not care what those thicko glory boys at the

Hezbollah say. They are cruising for the bruising!

So many victories have there been, too many to list here. Most notable are that we take rebel stronghold on

Lebanese border, capture my ancestral hometown of Qardaha (you must all visit; it is beautiful and we have cleared up much of the war crime) and

also cut off coastal supply line of arch enemy Jabhat Al-Nusra (*spit*). Now my eldest – Safiz - can go out with his friends to play ‘hunt the Jihadi’

with no risk of kidnapping or sniper taking potshot at first Al-Assad heir. I only wish Safiz would stop killing random transients and bearded family

men by mistake, leaving me with a big mess to clean up afterwards. They have such an imagination at that age.

So there is no rebelliousness left in the proud Syrian nation, but neither is there room for complacency. Old colleague Hassan Nasrallah

think we are all done now and can relax forever. Not so my big-head, hat-wearing fuck of a friend. It will not be ‘mission accomplished’ for

Vladimir hold the attention of the world with his attempt to oust idiots from the Ukraine, letting me off the

hook. Honestly, what do those neo-Nazis expect? Everybody love Puta - Russians, Crimeans,

bodybuilders. They weren’t even the right kind of neo-Nazis.
I digress. Despite brave armed services taking Bashar as inspiration to put things right, we have been through a lot, my people and I.
Sometimes you simply have to build damaged morale and celebrate together victory of brave-hearted Syrian nation. With that in mind,

earlier in Spring I travel to newly-peaceful town of Adra to inspect shelter for people displaced by fighting. My heart go out to them, it really do.

Sometime I wish fragrant wife would pay more attention to business of husband, pretending to care when I visit dangerous place like this for

good of nation. Rather than begging me not to leave, Asma mumble goodbye, say something disparaging about maid then go back to swapping

make-up tips on Middle Eastern ‘Ladies Who Lunch’ website. Honestly, if Asma will not appreciate me sometimes I think I should find woman

who will. Then I remember what father-in-law look like when angry and reconsider.

I was not fazed by her though, and so my private plane, undamaged by mortar fire, take Bashar plus

modest security detail direct to Adra where, on touching down in Godforsaken wasteland, I am surrounded

by middle-aged ladies in headscarves who have never before seen a man of my magnitude.

They were impressed, I could tell. In spite of what has been said on disreputable Internet sites (all blogs
now taken down and naughty culprits removed from families, imprisoned, then hurt) none of the sheltered peoples ask “who is that?”
or “where is his chin?” No, I tolerate friendly fishwife clucks all the way up until I reach children of shelter, when little faces light up
in gratitude, beaming from ear to ear. They clearly know Bashar responsible for temporary, sort-of-protective roof above their pretty
heads and they are so grateful, every fucking time. Little boys and girls can be so cute before they become politically aware.

Check out more photos on official Al-Assad Instagram or Facebook page. You can see me swallowing revulsion to get within feet of

filthy peasant. See me point at poor, deprived urchin and do serious face, as though I could care less. Those penniless bastards

lapped it up. They were truly inspired and round of applause come after I give personal guarantee no more loyal subjects will be

malnourished or gunshot. That kind of thing all down to those pesky rebels, now vanquished.

Yes, Bashar walkabout certainly spread joy among locals; not all of them uneducated plebeian

scum as you might expect. I could feel their morale rise as the hubbub grew and burly security

detail have to push clamour away from noble Bashar visage. But then I find myself interrupted by

silly ringtone. It is ‘important call’ regarding cousin Hilal who has been killed in rocket attack!
Those damn jihadis have one last sting in the tale! Luckily I hate that bastard. Hilal was always smug about his war service and ‘brave’
goings-on, looking down massive nose at Bashar for failing to get hands dirty and joining ‘National Defence Front’ when he do. The only reason I not have Hilal

executed already is because his ‘ma-ma’ wet-nurse me when kiddie, or so Al-Assad family legend state.

Never mind. Impending funeral give Bashar excuse to escape commoners, although I am fearful it will be sombre affair and dampen

good mood. To prevent this I brighten up service with impromptu speech, showing all I learn from studying the Comedy Roadshow of

your best stand-up comedian; Michael McIntyre. I hardly mention dead cousin at all, and have balloons delivered to graveside before

letting off party poppers when coffin is lowered. This really brighten up dull event, although extended family believe we are under

attack for a moment or two (everyone laugh about this later).

So that is what I have been up to my chums. Sadly there is no time to continue such fun and

game, even as the days lengthen and outdoors remain free of artillery fire. No, I must oversee
‘destruction’ of ‘chemical stockpiles’ by UN busybodies, arrange to paint Syrian flag on every shop front before forthcoming ‘election’,
ensure final rebels are found, brought before me and flayed alive and then, last but not least, work out what to get fragrant wife for
her birthday. What do you buy woman who has everything? Literally, everything (I can show you round the warehouses). It is big
fucking poser my friends, particularly with coffers depleted by noble war effort. I may have to contact high society Damascus friends
and forcibly claim their wealth, exchanging it for diamond encrusted tiara or solid gold carriage or whatever. But do not worry my
loyal readers, everything will be fine in the end. The Al-Assads will be here for a long, long, long time to come.
Next time, Bashar oversees fully democratic Syrian parliamentary elections – lol! 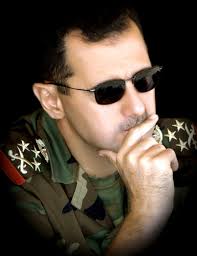