ELECTION REPORT
with Al Likilla
Home Defence UK
A Symptom of a Greater Malaise
ALL SPECIAL REPORTS:
“We’ll Get In The Coalition Bed With Anyone”
Maintains Clegg
01/05/15
To the Liberal Democrats’ yellow-bellied ‘battle bus’, which is currently parked in motorway services off the M20 so Danny Alexander can
enjoy a Ginsters Pasty. Home Defence arrives here on learning that an increasingly desperate Nick Clegg has ordered a refit of his official
electoral transport, to bring the vehicle in line with his party’s newly inclusive stance.
“The gaffer told me to bung a load of facilities in here, take out the existing accommodation and replace it with some Emperor-size
mattresses.” One of the builders clustered around this increasingly egg-stained coach explained. “Cleggy says this is to take care of the extra people he wants sleeping in the LibDems’ bed after May 7th.”
“I’m just doing me job.” The labourer went on. “Each to his own I say. If some bigshot want communal sleeping arrangements where anything untoward could happen to his person, or worse,
everyone ends up accidentally supporting the Liberal Democrats, who am I to judge?”
Indeed, this battle bus rebuild comes after a switch in policy from the manic and flailing Clegg who stands to lose his seat on May 7th in what many TV watchers are hoping is this year’s
‘Portillo Moment’ – the point where a once-popular politician gets his arse handed to him for revealing too much of himself. Couple this with the leaching away of Liberal Democrat support
by more than 50% over the past half-decade, as it became apparent the leadership would support anything for a taste of power, and the crisis enveloping the once-principled Liberal
movement is immense. Something had to be done.
“Never again will the British electorate believe the LibDems actually stand for anything. They learned that lesson on being regrettably credulous when
approaching the ballot box, back in 2010.” Electoral analyst Weeb Dithyramb confirmed to HDUK. “But even with the many betrayals of Clegg, from
tuition fees to the post office sell-off to his continued backing for austerity, there remains a chance the Liberals could retain a few seats later this
month.”
“I know it sounds unlikely, in light of what’s happened, but Clegg is gambling on a modicum of success. He’s desperate to retain a position of
power, however miniscule - his party has developed quite the taste for it.” Mr Dithyramb noted. “That’s why he’s casting around, pleading with the
voters to see how much Tory ‘evil’ the LibDems have prevented, which isn’t much, let’s be honest. Then Clegg started imploring the electorate to vote ‘tactically’, because
obviously putting your ‘X’ by the Liberal Democrat candidate, knowing their manifesto will never come true, is a time-honoured route to electoral satisfaction.”
“Now comes Clegg’s final ploy – fluttering his eyelashes at every major party in contention. Coquettish glances are already being cast the way of ‘Diddy’ David Cameron’s Conservatives, even as Nick writes admiring notes to Nigel Farage, Nicola Sturgeon and Leanne Wood behind the PM’s back, claiming he’s interested in ‘a good, thorough coalitioning’ with any of them, or even all at once.”
“Honestly,” Weeb sighed. “The man can hardly keep it [a written offer of governing] in his trousers.”
Indeed, with Clegg’s public announcement last night that his party “would essentially get into bed with anyone” if it means another shot at governing, the tabloid press this
morning has led with mocked up bedrooms on their front pages; images of of Liberal Democrat MPs beckoning other politicians into an enormous four-poster inside their
collective boudoir, located deep in party headquarters. And as spin doctors and apparatchiks rush around, looking to contain the fall-out with damage limitation exercises,
their leader is only making it worse, like a man with nothing left to lose.
“You could see this as slatternly behaviour, but I think it’s natural for an open-minded 21st century guy to make advances to every female leader he meets, or to tell Ed
Milliband to ‘come and get me big boy’ while on the campaign trail.” An ‘out and proud’ Clegg told bystanders near the service station pumps. “Everyone knows how I slept
with ‘up to 30 women’ before Miriam tamed me, literally tamed me. Now I’ve shifted those promiscuous instincts into the political sphere,
which will result in a better country for us all.”
“This doesn’t represent the casting off of core Liberal Democrat values – I mentioned we were willing to shack up with anyone before our campaign even got underway.” Clegg
asserted. “Everyone, from the anti-immigration little Englander to the Welsh language-empowering obscuro, is fair game for an intimate partnership. We’d only have hooked up with
whoever was keenest after the result came in anyway. Better to lay our cards on the table and say: have me now! I’m ready to hitch the Cleggwagon to any of your trailers!”
Members of the press were left wondering at the language employed by a faltering party, trying to retain some hold over the future of Britain,
and were soon questioning the flexibility of policies that can swing from right to left before occupying the centre ground like some kind of
schizophrenic metronome. But Clegg remained unrepentant and, in a leaked letter to the Greens released this evening, calls their leader
Natalie Bennett “a right fancy piece” before asking if she would be willing “to get up-close and environmental” with him in Westminster.
As HDUK was going to press, none of the major parties had taken the Liberal leader up on his plea for “a platonic lover of every political hue”, despite a moving statement from
Clegg on Nick Ferrari’s radio show earlier. Here he described LibDem MPs as “available for your personal use – whether it’s policy launches, votes in Parliament or just male
escort duties at dinner”. Nick then went on to describe Business Secretary Vince Cable as “built for comfort, if you know what I mean” and “a proper little slut”. 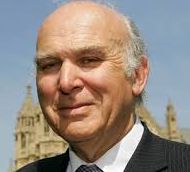 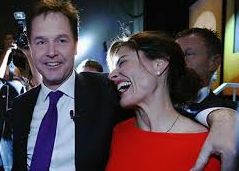 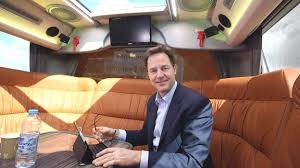