HEALTH
with Archibald Scamp
Home Defence UK
A Symptom of a Greater Malaise
The First Step to a Happy and Prosperous New Year - Stop Being a Dick
12/01/14
ALL HEALTH:

Or if that’s too much to ask, be less of a dick.

Even just try to be less of a dick.

Anything would, indeed, be progress, as there appears to be a lot of people in the world who spend an

inordinate amount of time behaving like dicks.
What does it mean to behave like a dick?  Well, generally being selfish and thoughtless, as that’s pretty much how a dick behaves.
Dicks don’t consider whether they should respond to whatever stimulus is available, they just point at whatever they want and
demand it, regardless.  Even if the brain says no, the dick will be ready and waiting.  For the rest of the time, dicks hang limp
and flaccid, waiting to dribble their piss.
Unfortunately for humanity, dicks have been responsible for a huge amount of fuck-ups (e.g. deaths, destruction, formation of boy bands). This is due to the high proportion of world power throughout history possessed by males, with everyone positioned under social conventions made by men, making sure they were in

charge through force (rather than because they showed sense or sensitivity or intelligence).

Bush.  Dick.  Massive, massive dick.
Imagine if the politicians leading the UK government stopped being dicks?  Even just a little bit.  Less money would be spent on
wrangling expenses to pay for the new duck house (indeed, the politician wouldn’t even have built a duck house in the first place,
because ducks live outside on lakes then migrate when it gets cold.  Much like politicians, or Simon Cowell).  No more signing in at
the House of Lords to claim £300 daily expenses while contributing nothing to the important, vital debates that shape our nation (because said Lord would have realised they were greatly privileged and be glad to give their attention to our great nation for free).  No more slashing billions from those who can’t afford it, while giving

millionaires a tax break.  Maybe a certain politician wouldn’t have suggested cutting the NHS budget when, you know, a lack

the middle management fat would be a good idea, purely in the interests of sanity).

Maybe, instead of following the examples of the dickish judges on the endless parade of arse-burningly painful talent shows,

people would be polite and thoughtful in their criticism, instead of essentially calling someone a useless fucktard on national

television just because they dared to dream of success (admittedly, there’s a lot of shit performers, but give them a break -

they haven’t had the training, the stylists, the plastic surgery, the opportunity to perform

oral sex on famous producers in return for a brief, soul-selling moment in the spotlight,

something manufactured pop stars receive as a matter of course. And still they fail to

deliver much beyond mediocrity).
It's the dicks in this world who start making a call on their mobile from the driver’s seat, slowing everyone up, and then have a
shit-fit when somebody makes a complaint.  Dicks don’t let cars out at busy junctions.  Dicks give waiters a hard time for a meal
that isn’t exactly as they imagined it would be, but haven’t got the stones to face up to a chef who might decide to use those
knives they have access to.
It is not good to be a dick.
Stop being a dick. 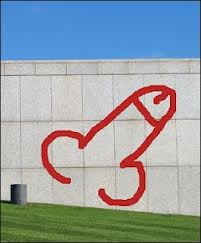