THE HOT LUNCH
with Botham Squab
Home Defence UK
A Symptom of a Greater Malaise
The Hot Lunch - Game of Crohns
18/08/14
ALL HEALTH:

Winter is coming… And my days have been long and laden with gloom of late.

the A-List clientele using my private service destroyed (most are now serving, appealing, or awaiting prison sentences for historic

sex crimes) I have become rudderless and alone. The loss of the routine and structure a life ‘at the pass’ offers has been

catastrophic for an ego such as mine.
Mind-calm and meditative self-exploration remain illusive. I keep busy in the week with engagements, Internet shopping and the occasional personal
appearance. But I’ll be honest; most of it’s dried up. Last Sunday I found myself consuming alfalfa sprouts and chocolate-covered rice cakes, assuming that healthy eating would help.

Every Friday I receive a text message from DirectGolf, offering me 10% off a putter. But the happiness doesn’t last. It can never last, not really.

But James Martin came back, why can’t I?

I did have the pleasure of meeting Peter Dinklage. It was last summer, at the wrap party for 2013’s Celebrity Goose Step-tember. This was a month long,

nationwide campaign to grow, maintain and celebrate Hitler moustaches. Good, wholesome charity work, in aid of Crohn’s Disease Awareness.
Dinklage, a dwarf, has had a long and very public battle with Crohn’s Disease. At just nine years old Dinklage’s dietary system became lined with irreversibly inflamed tissue. The dwarf
blames a packet of ‘Spangles’ he found on the parcel shelf of his Dad’s car. Dinklage confides: “If I tell parents one thing, I tell them never let a child eat a whole packet of boiled sweets which

has been left under a rear windscreen in the California sun for three months”.

Dinklage is damaged beyond repair, his stomach unable to cope with the steady flow of rich, big-flavoured food and drink that any normal, red-blooded, dwarf

will heartily stuff in its mouth. Whilst this doesn’t threaten to immediately shorten his life as a large forehead does, it does limit Dinklage’s diet considerably. Curries, spices, anything

with chilli; raw red onions, nuts, alcohol and fried food are all big no-nos. Exposure to such can cause abdominal discomfort, nausea, flatulence and, in extreme cases, violent

Of course we hit it off straight away. Our passion for caravans, cooking and bare knuckle street fighting cemented what would become a great friendship. We laugh now, together, like

right bastards - every single time we meet up. I always ask Peter: “How was school?” and he calls me a cunt. I’ll ask him how he came to be a dwarf. He’ll say he used to be normal

size, but one night he lost a fight with a dwarf in a pub car park. When he woke up the following day, he had turned dwarf. “YOU DO NOT WANT TO LOSE A FIGHT WITH A DWARF!”.

we yell. Brilliant - we shitting laugh ourselves stupid.
So I jumped at the chance to interview him over a Hot Lunch. This will be good for me, I thought. Just what I need.
Dink was in town, filming the final season of HBO’s crime drama ‘Clown Man’s Shoes’. As its producer, co-writer and star, the last seven years of Dink’s career has been spent
immersed in the world of Detective Maximus Rose of the NYPDCdC (New York Police Department Cirque De Crime). Adapted from Archibald R R Archibald’s ‘Songs of Mentally
Ill Elephants’ series of fantasy crime novels, Clown Man’s Shoes’ follows the law-enforcing exploits of a motley band of offbeat circus performer detectives. Snubbed by the
establishment and unconventional in their methods, they are Juggler, Jury and Executioner on the mean streets of 1980s New York.
With 13 Emmys and 4 BAFTAs under the belt of the series, you can’t argue with its conceptual appeal. Dink’s dwarf lead has become household property across the globe, an
unlikely anti-hero who has his feet under the coffee tables of any ‘Boxsetter’ worth his salt.

I can’t say I’m not a fan. I love it, and I love nothing more than Boxsetting the shit out of that series on a lonely weekend.

Fourteen months after that first meeting we sit in our restaurant’s challenging interior, surrounded by decomposing litter, bits of rusted car and an unkempt donkey, tethered to a post.

Then… immaculately manicured bonsai and coy pond aesthetics interweave their calm, through the chaos of this traveller site chic. The result? A juxtaposed environment, bursting with

social comment and thoughtful provocation that isn’t very nice to sit in, let alone eat your dinner off. But its definitely as cool as last month’s craze of eating your food off 1980s Arcade

We are in Soho’s latest pop-up groundbreaker ‘GypoNippon-A-Ding-Dong’. Dink’s never been one to shun the bandwagon, whatever the outcome;

appearing in both the British comedy ‘Death in the Family’ and the pointless US remake the Yanks produced two weeks later is proof of that.
Today he rides into town on the LA food craze, ‘Gyponese’, a fusing of the cuisines from Japan in the Far East and that of roaming (big fat) Irish travellers. Romany classics like Tesco Roast

Chicken Dinner, Tesco Beef Curry and Bernard Matthews Frozen Turkey Ends are upcycled to the heights of Japanese delicacy and precision we know so well.

Dinklage laughs out loud, like an elder hobbit might, after too many Banbury wines as a duo of Soho media ‘cats’ prune past the half-frosted window. “I don’t

care how you spin it man, rolled up jean shorts are for homosexuals!! Why are they a-selling them to pussy loving men in Burtons? You have Burtons here,

His uncompromising attitude to life has been forged in the experience of dwarfism. “Do it to them first” will be emblazoned on Dink’s gravestone. He wants

love, he says, but he wants bigotry more. I intend to ask Dink if his gravestone would be the same size as a normal gravestone, but with disproportionate

decorative bits, but by now he’s already bleating on about the latest foodie phenomena.

buzzing now, packed to the ceiling with London’s fringe breakers seeking new culinary experiences and bragging rights at weekend dinner parties. Enjoying some downtime after a hard morning’s filming, Dink’s co star; Jim Broadbent (who plays ‘Mike’, an elder clown and partner of Maximus Rose), is sat mere feet away. “We hired Broadbent in the clown role, mainly as a
costing exercise. He requires no time in make-up, literally”. Dink winces, “Personally, I fucking hate clowns - disgusting beasts. But for the sake of the show you get your head down; there’s
a job to do. But I won’t lie, it was hard on both of us, the first three seasons especially.”
Widely reported tantrums and fall-outs were frequent. “I wasn’t sleeping well,” He sighs. “Until a few words from Breaking Bad’s Brian Cranston helped me focus on my art.”

Seated at our restaurant table, Dink looks like any other regular size human (but with the arms of a baby). It’s easy to forget the difficult personal journey

this dwarf has been on to reach his place in the world. As easily as he forgets his Crohn’s condition, as Dink will be the first to admit.

As the drinks and conversation flowed in folly, we were both blissfully unaware that the ‘Red Onion & Whisky Alexander’ contained red onion, double cream

and a strong, dark, alcoholic measure of whisky and black treacle liquor. These are four innocent ingredients to anyone with a half-decent stomach lining.

To someone with advanced Crohn’s, they could be deadly.

nothing I’d ever experienced before. Dink’s speech became slurred and his manner more aggressive. An unfortunately dressed waiter was forced to unroll
his jean shorts and yell that he ‘loves the holes of women’, a bread roll bore the brunt of a diatribe on ‘flaccid, polo-necked sexual deviants’ he shares production credits with. From there
it went south very quickly, Dink’s face reddened and becoming inflamed, his eyes puffed up like doughnuts. The sound of a battleship engine room began to emanate from his stomach
and he started muttering into his lap about Mother’s fingers being “too long to be loving”.

It soon became apparent I was losing my interviewee in some insane version of anaphylactic shock. I found myself none the wiser as to how the situation could be

recovered (other than to get up, make my excuses and leave). Selflessly, I gestured to Jim Broadbent, thinking his presence would defuse the situation. People

were starting to stare and in England, we can’t have that.

The appearance of a full-blown clown, only clad in normal shoes (you can’t eat in clown shoes) proved to be a bad development, although it seemed to knock Dink

out of his catatonic rambling. Dink’s deeply held phobia took hold and his base mind mechanics sought to fight rather than flee. Rising from his chair (more ‘lifting

himself than dropping off the side’ but…) he launched at Broadbent, trying to strangle him to death while hollering a banshee war cry about "not losing and never being turned into a clown". Broadbent,

who had seen all this before, held Dinklage off with a butter knife pressed into his oversized forehead. Dink’s stumpy arms, flailing in their attack but unable to beat

the reach of the knife, were confronted by Broadbent’s quiet confidence in talking him down; reasoning with his assailant, explaining that it didn’t work the same

way with clowns. You couldn’t become a clown, like you could a dwarf. You didn’t get to be a clown by losing a fight with a clown; you were born a clown; it’s all

genetics and stuff, and it certainly isn’t caused by failings in hand to hand combat.

Finally, after what seemed like hours, the Crohn’s episode blew itself out. Dink and Broadbent collapsed in an exhausted clown-dwarf man-orgy of supportive

hugs.
By now I was out in the street, observing from a safe distance. My career doesn’t need another reason to raise the suspicions of the Metropolitan Police.
Season 7 of Clown Man’s Shoes premiers on Sky Atlantic in early October. 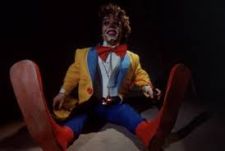 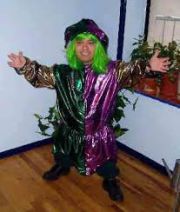 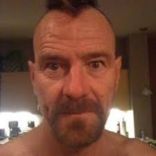 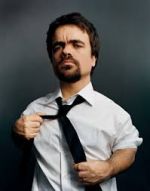 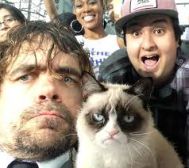 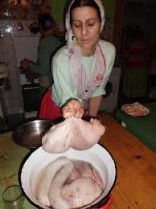 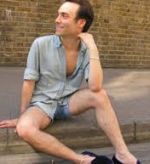 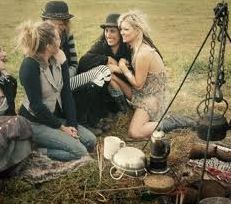