An established practice of politics is to capitalise on the fears of those you mean to control - many successful politicians have taken this to its logical progression and created those fears.  It's still a matter for debate whether Reagan knew what he was doing at any given moment, but he was undoubtedly a master in the field when it came to spreading panic.  While running for office in 1980, he announced during a television interview that: "We may be the generation that sees Armageddon."
In the early years of his administration Reagan was keen to convince both the American people and the USSR that he was prepared to fight, and win, a nuclear war.  This was originally proposed by President Jimmy "soft on Communism" Carter's Presidential Directive 59, though expressed again in National Security Decision Document 13, approved by President Reagan in 1982.  It's a vote winner with a clear downside.  Whatever your ideology, the idea of humanity reduced to a handful of suits eking out an existence under twenty feet of lead bunker makes it difficult to sleep easy, and Ronnie just wouldn't shut the fuck up:

"Biblical scholars have been saying for generations that Gog must be Russia.  What other powerful nation is to

the north of Israel? None. But it didn't seem to make sense before the Russian revolution, when Russia was a

set itself against God."

Can you say "self-fulfilling prophecy"?

And if Americans were frightened, the Soviets were petrified.  In 1981 the RYAN (Nuclear-Rocket Attack) program created a "heightened state of intelligence alert, instructing all foreign stations to conduct a constant watch for tell-tale signs of the build-up to a Western nuclear strike."  In November 1983, while exercise Able Archer 83 was practicing NATO's command coordination, the Soviet Union, fearing a sneak attack from the US, put their military forces on full alert in preparation for war.
Tensions were strained further by the President's proposal for the new Strategic Defence Initiative - a space based missile defence shield that would shoot down incoming missiles with lasers, aka the "Star Wars" system.  Such a program would have flown in the face of the 1972 Nixon/Brezhnev Anti-Ballistic Missile Treaty (discussed previously), and tipped the balance of power back in favour of the US.  To the Soviet Union it was considered both a provocative and aggressive escalation of the arms race, and for many prominent Americans, including Los Alamos physicist Hans Bethe, it was a dangerous step back from an increasingly shaky diplomacy.
By the end of Reagan's first term of office nuclear paranoia had reached new heights.  The US annual defence
budget had passed the 300 billion dollar mark, sixty thousand atomic weapons were poised to rain down global
death at a moment's notice and US-Soviet relations were in tatters.  Ah, happy days.  And yet, somewhere along
the line, the horror of the situation seemed to have finally filtered through to the crazy old bugger.  In his 1984
State of the Union Address, Reagan took time out to speak to the Evil Empire, and managed to avoid a single
reference to the Revelations of St John the Divine.  Well done Ron.
"Tonight, I want to speak to the people of the Soviet Union, to tell them it's true that our governments have had serious differences, but our sons and daughters have never fought each other in war. And if we Americans have our way, they never will.  People of the Soviet Union, there is only one sane policy, for your country and mine, to preserve our civilization in this modern age: A nuclear war cannot be won and must never be fought. The only value in our two nations possessing nuclear weapons is to make sure they will never be used. But then would it not be better to do away with them entirely?"
Wise words.  Meanwhile, in Moscow, after the death of Konstantin Chernenko, elections were poised to take place for a new Communist Party General Secretary, and though they didn't yet know it, the bald-headed son of a peasant farmer would soon be making massive reforms.  As the world entered the second half of the decade, few would have believed that the Cold War could end peacefully, but surprises were in store for everyone.
Join me next time, as Reagan meets Gorbachev, and we wind down our historical trip through an era of universal globe-spanning terror.
- Clint
TERROR
with Clint Panzerdivision
Home Defence UK
A Symptom of a Greater Malaise
A RETURN TO NUCLEAR PARANOIA
Triumphantly presents the long-awaited.....
REAGAN YEARS - Part One
ALL TERROR:

"My fellow Americans, I'm pleased to tell you today that I've signed legislation that will outlaw

United States of America, star of  'Bedtime for Bonzo'.  A man who, regrettably, wasn't always aware when the

microphones were plugged in.  Ronnie sailed into the White House on a wave of anti-Communist rhetoric, and

proceeded to create a whole new brand of personally hand-crafted terror for the delight of all humanity.

Ronnie hated commies.  No commie-lover was he, no sir.  During the early Fifties, while President of the Screen

Actors Guild, he had been an FBI informant on disloyal and subversive activity in Hollywood, and in the climate

of the time, his hard-line stance paved the way for his transition into politics.  Reagan's anti-Communist views

were typical of the period, derived primarily from fear of a worldwide Communist takeover, and a perceived direct

threat to the US government.
This viewpoint was crystallised in his famous "Evil Empire" speech to the National Society of Evangelicals, in which he denounced the growing anti-nuclear "Freeze" movement and portrayed the two superpowers as two sides of a diametrically opposed morality:
"I urge you to beware the temptation of pride - the temptation of blithely declaring yourselves above it all and label both sides equally at fault, to ignore the facts of history and the aggressive impulses of an evil empire, to simply call the arms race a giant misunderstanding and thereby remove yourself from the struggle between right and wrong and good and evil."
In 1950 the threat was an ideological one, but a thirty-year arms race had given Reagan's worries a special edge.  By 1980, US first strike capacity had disappeared down the toilet, and the Soviet war machine was chugging out nukes like Coke cans. 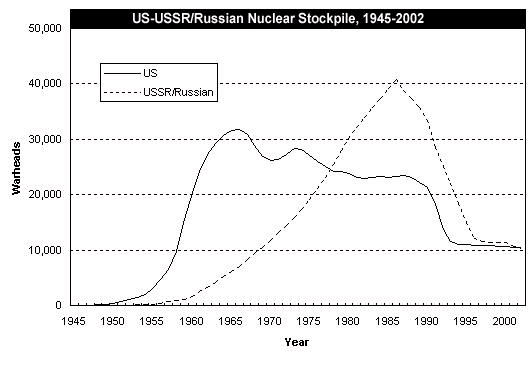