Home Defence UK
A Symptom of a Greater Malaise
TERROR
with Al Likilla
ALL TERROR:
Militant Secularists Vow To Do ‘Whatever It Takes’ To End Religious Intolerance
01/05/12

A hastily convened meeting of COBRA, the government’s emergency committee, which met earlier

In the footage, a man wearing a balaclava and t-shirt bearing the slogan: ‘Jesus Ain’t Here, Move

thinkers, including AC Grayling and Matthew Parris, before promising to ‘rain fire’ down on non-infidels.

The anonymous spokesman, captioned Roland Tugbucket (although terrorism experts believe this to be an assumed name) goes on to say:

“For too long the pious and God-bothering have wielded influence over countries around the world. I mean, just look at the Pope – he’s ridiculous

and antiquated and must be stopped. Everywhere we look there is armed conflict and mass killing fuelled by believers; from Iraq to Nigeria to

Pakistan.”
“Here in Britain these zealots hold sway over government, dictating policy and law, and preventing true progress while warping the minds of our children through Christian and Catholic schools. There can only be one response to such lunatics, and that is violent insurrection immediately, with the ultimate aim of wiping religious belief off

the face of the earth!”

“Yes, it will be painful. We are calling for rationalism by force, utilising civil war and what the faithful call ‘jihad’. But the medicine

must be strong to prevent future generations dying for an ill-thought out, entirely made up cause. As much as I dig Alain De Botton

and his well-meaning ilk with all their ‘church for atheists’ nonsense, you can’t fight fire with talking.”

the footage suddenly cut to Rihanna being interviewed on E4.
There has since followed a number of threats from the group, who style themselves ‘Heathens For Hitch’ in tribute to recently-dead
polemicist Christopher Hitchens (right). These messages set out HfH’s belief that all other avenues have been exhausted, and that
the only way to ensure a truly stable, secular society is to abandon debate, protest and trying to turn the deluded. They assert
that the clutch of belief systems which has historically inflicted damage on ordinary people will only be eradicated by taking the
struggle underground and getting all tooled up.
Indeed, experts believe HfH could be responsible for a number of recent terrorist ‘actions’ and annoying pranks around the world. These include shouting over cosily reassuring Sunday services in rural England, throwing paint at the window of a Scientology bookshop, and the public abuse of the Koran across several middle-eastern states. Further to this last desecration, Al-Jazeera was contacted by an anonymous source and told “it were a bunch of happy-clappy Christians who done that.”
Going undercover in the name of exclusive news, Home Defence arranged a meeting with a London-based member of this secretive group, a young woman who regularly wears a bandanna with combat fatigues and goes by the name Chastity Skrillex.

“The only way to kill the virus is to destroy those who spread it. We do that by frightening ‘God’ out of potential carriers.” Chastity (left)

told us in the parlour of her mother’s bungalow near Bromley, a missionary zeal burning behind designer sunglasses. “I’m tired of religion

being rubbed in my face every time I turn on the TV, go into church or pick up a bible. Heathens for Hitch will re-educate those who claim

to do the work of Christ, by whatever means necessary. Whether that involves spreading scientific literature to debunk the scriptures,

harassing Jehovah’s Witnesses by following them around and making barnyard noises whenever they speak, or wiping my arse on a

crucifix, these are all valid methods.”
“Although what we could really use.” Miss Skrillex continued, leaning in conspiratorially. “Is a big bunch of guns. You don’t know any arms dealers do you?”
The media has proceeded to leap on the youth and nubility of the revolutionaries in this movement which, experts estimate, has hundreds of members worldwide, all espousing a philosophy that has no room for the divine. These individuals are inspired equally by soft drugs and the Russian ‘Society of the Godless’ movement which, last century, sought to exterminate religious thought through intimidation and leafleting. Now Heathens For Hitch have demanded the UK government remove deference to religion from society, valuing logic and reason instead while teaching schoolchildren the natural world is all there is, with no voyeuristic agency up in the clouds watching to see if we’ve been ‘bad’ or whatever.
Predictably the authorities are having none of it, treating this group as extremists who don’t know what they’re talking about. A series
of dawn raids have recently taken place which only succeeded in upsetting pillars of the community and the left-wing press. Worse,
Heathens for Hitch have gone on to claim other victories, with the Archbishop of Canterbury acknowledging in his resignation speech
that: “the terrorists have won”. Rowan Williams (right) stated that he “didn’t want to get caught in the middle of this”, preferring to remove
his robes and retire to tend his beard.
There is now expected to be an increase in global and local action, with HfH making threats to African Mosques, planting explosives up Cathedrals and kidnapping the

Vicar of Bethnal Green, holding the poor lad hostage until all segregation based on religious faith is seen to end.

One of the few believers willing to put his head above the pulpit, Daily Telegraph columnist Charles Moore (left), had this to say on The One

“It’s bloody scary, is what it is. I’m willing to see the argument from their side - no one can deny there’s a direct link between believing

Holy Books are literal and the stoning of suspected adulterers; execution of homosexuals and being bigoted towards anyone who thinks

differently. But these HfH people don’t give credence to the positive things that religion can do, stuff like Good Samaritanism, Songs of Praise,

charity muggers and Christmas. We’re not just about the Tea Party pushing intelligent design and ethnic

cleansing you know; there are nice bits. We’d lose all that by giving in. Deport the buggers to Afghanistan,

that’s what I say. See how they get on over there.”
But as HDUK was going to press cracks in the movement had started to appear, with reports that a group of hardline atheists were
splintering from the main group to focus efforts on the teachings of Richard Dawkins and target anyone who doesn’t believe in
evolution. A certain amount of in-fighting had also been observed among HfH members, with the dogmatism of the leaders meaning
anyone with a soft spot for humanists was ejected from the core group. These founding terrorists have now been forced out, along
with a gaggle of agnostics (right), who reacted to their former comrades describing them as “confused and spineless” by going to the
police and informing on everyone. 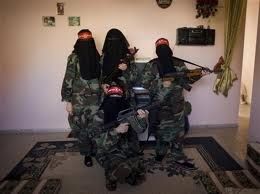