1)  I’ve hiked the Inca Trail to the lost city of Machu Picchu.

And before I go any further, I should avoid laying claim to being some

kind of heroic solo explorer, penetrating the wild frontier. I did have a

Come to think of it, he actually had companions too. And some really

fucking annoying ones! Do you remember that twat-ass little Chinese kid in the second film? And ...

what’s-her-face? ... Willy Scott! The screaming blonde one that Spielberg ended up marrying. (And clearly not

for her acting abilities.)

Actually, on the subject of her, have you seen a picture of her in that film recently? I can’t

be bothered to look up her name – you’ve got the internet in front of you, right? – but I saw

hotter in it than you’ll remember it’s just plain weird. You know, you remember just

wanting to slap her the whole time, and maybe manage to elbow Short Round in the face

while you’re at it; now go and Google some stills of Willy Scott. i.e. with no voice or acting

or plot-points or having to think of her as a real person.

Okay, to reiterate, I did travel to Peru with a group of friends. None of them, however, have

consented to have their names used in an article which, admittedly, seems thus far more

preoccupied with the relative fuckability of action heroes’ companions. For simplicity’s

(Can’t resist mentioning this, by the way, and this is something I did Google – did you

used to watch Trumpton and think that the firemen were called “Hugh, Pugh, Barney

McGrew ...” etc.? Me too! Turns out that would have set off the klaxons in QI!)
So here are the broad strokes of what it means to hike the Inca Trail: you begin by spending a
couple of days in the capital city, Lima, which is probably most significant for me for being
able to boast the most singularly suicidal traffic I’ve ever peered at between my own fingers
while shrieking like a girl. Seriously, every driver seems convinced that lane discipline is just
something that other people have to do. The overall effect of a taxi journey is not dissimilar to
a roller-coaster ride, except (a) you’re travelling slightly faster, (b) the vehicle you’re in is
slightly smaller and less well-protected, and (c) you’re fairly sure that you’ll actually survive a
roller-coaster ride. I have no doubt that the views of afternoon life in the quaint little side streets
of Lima would be a pleasure for any traveller, although they are kind of lost on you when they
hurtle past at 50mph.

All of which leaves you rather in the mood for a beer or two. So here’s the first lesson in PERU

Spaniard.
(Actually, going back to the ‘QI klaxons’ theme here, do you know of the story that the origins of the Spanish lisp date back to a king who spoke that way and ‘prestige borrowing’ led to it being incorporated into the language? Turns out
that’s complete bollocks. Incidentally, if you didn’t know that story then feel free to not read the last
three sentences...)
An internal flight from Lima takes you up into the Andes (by the way, if anyone does the “end of your
wristes” joke ... kill them instantly without trial!) to the ancient Inca capital of Cusco. Here, you have
to spend a few days acclimatising to the altitude. At least that’s the theory – unfortunately, Barney
McGrew is a long-term smoker (never thought I’d hear myself saying that) and pretty much keeled
over as soon as he set foot in the city.
The rest of us explored the Andean settlement for what was initially a 24-hour booze-free zone – the
recommended period to allow your body’s metabolism to acclimatise. Obviously, we’d all been fully
ready to ignore that, but Barney wheezing away in his hotel bed was a kind of early warning you
couldn’t dismiss. Consequently, the first beer was particularly sweet! And was drunk in the excellent
“Paddy’s Pub”, a venue able to make the fantastic claim of being the highest Irish-owned pub anywhere in the world.

Incidentally, if shopping is your cup of tea, Cusco re-sets a new standard when it comes to tourist

tat If you ever go there looking to bring home a few souvenirs, be fully braced to be presented with

Peru, by the way, seems to have passed some kind of law which

states that, before consuming a meal in a restaurant, you have to

probably reading that and thinking “my god that sounds

would it?” Oddly enough, I went through the same thought process

after actually tasting one. They seem to split opinion more

completely than the Pope does. (Some people think he’s a

fuckwit.)
The day before undertaking the Inca Trail, we took a tour bus out to the small town of Ollantaytambo, which I never quite succeeded in pronouncing. (Although the winner of the award for best Inca name definitely goes to ‘Wayllabamba’ – mainly because it’s impossible to hear it without bursting into the song. (Come to think of it, I was also very taken with ‘Sacsayhuaman’ – mainly because when you pronounce it properly it sounds exactly like you’re saying ‘sexy woman’ in a cheesy Mexcican drawl.)) This is where we encountered our first guinea pig farm.

Okay, I’ll say that again, just so we’re clear: guinea pig farm. And yes, all of us went through the

inevitable European reaction: “But ... but ... but they’re REALLY CUTE and cuddly and they

As if that wasn’t enough to weird you out, the indoor chamber where this particular family keep

the little squeakers is decked out with 3 hung-up llama foetuses, plus the skulls of the family’s

ancestors keeping an eye on the proceedings. I couldn’t help wondering whether, in fact, they

were just trying to fuck with your head...

(Slightly interesting guinea pig-related fact: the Quechua word for the animals is ‘cuy’

(pronounced ‘kwee’) which is an onomatopoeia for the noise they make.)
The Inca Trail itself is a 4-day hike through the Andes, the highest point of which (just over 4km up)
goes by the less-than-cheerful name of “Dead Woman’s Pass”, and on the morning of the day
when we were set to attempt the climb, the group of us sat round in the breakfast tent musing on
where that moniker may have originated. “You know what,” I said, “I bet it’s just because the
landscape looks like a woman lying down ... with huge boobs stuck up in the air and everything.”
This led to much cynicism and scoffing and general derision that I could have even thought of
such a ridiculous suggestion.

AND I WAS RIGHT! With all the sophistication of gentlemen

the world over, the Peruvian travellers who first identified this particular pass said to each other

Truth be told, it sort of does. Granted, it’s a whopping Dolly Parton-sized

tit, but a tit nonetheless. With a little imagination, you can make out the

life expanding your mind with the right kind of drugs (or, failing that,

provided you’re 4km up...)
And so to Machu Picchu! What can I say? It is awesome. I could describe it in detail, but where’s the comedy
in that? You could YouTube Michael Palin walking around it and he’ll do a more eloquent job than I ever could.
So I’ll leave you with this image of myself and Barney McGrew (who’d joined us at the site by train) having just
discovered the signposts which direct you on the various trails around the Lost City. The photo pretty much
wrote itself...
Home Defence UK
A Symptom of a Greater Malaise
TRAVEL DRINKING
with Dick Holder
ALL TRAVEL:
TRAVEL DRINKING
XXI - PERU 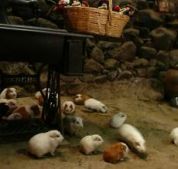 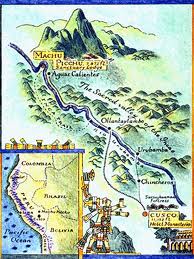 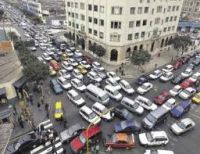 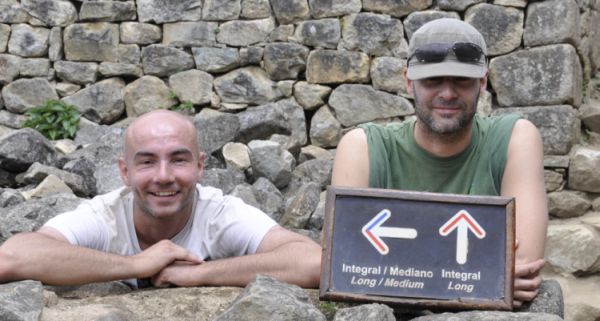